Van Cleef & Arpels The Poetry of Time at SIHH 2014

In this celebration of the Poetry of Time™, the Maison has also showcased some of its watchmaking icons. The Charms timepiece takes on a mantle of pink gold with exquisite simplicity, while the Pierre Arpels collection welcomes two creations that reflect the lifestyle of the multi-talented aesthete whose name it bears. New stories of luck and elegance reveal themselves with the passage of time, enriching the unique imagination of Van Cleef & Arpels.

For this 2014 edition of the SIHH, the Maison achieved its dream of reducing the scale of the heavens to the dimensions of a wristwatch. Six years after the launch of the Lady Arpels Jour Nuit model, it once again celebrates celestial orbits by drawing inspiration from the historic tradition of planetariums. Much in vogue in the 18th century, these objects provided a three-dimensional representation of the solar system and the movement of the planets around the sun. Ancestors of modern planetariums, they were animated by hand or using clockwork mechanisms of great complexity. Today, Van Cleef & Arpels revisits this idea in the light of its own poetic imagination: the Midnight Planétarium timepiece offers a means of immortalizing one’s own lucky day in the universe, while admiring the course of the planets.

Time and the astral bodies

This new Poetic Complication timepiece provides a miniature representation of the movement of six planets around the sun and their position at any given time. Earth and Mercury, Venus, Mars, Jupiter and Saturn – all visible from Earth with the naked eye – are set in motion thanks to a self-winding mechanical movement of great complexity: equipped with an exclusive module developed in partnership with the Maison Christiaan van der Klaauw, it contains 396 separate parts. The movement of each planet is true to its genuine length of orbit: it will take Saturn over 29 years to make a complete circuit of the dial, while Jupiter will take almost 12 years, Mars 687 days, Earth 365 days, Venus 224 days and Mercury 88 days.

Telling the time is a simple question of observing the shooting star, a cherished lucky motif for the Maison. Located at the outer edge of the dial, it completes its circuit in 24 hours. The story continues on the back of the watch, where the oscillating weight is engraved with a starry composition. The day, month and year can be set using two push buttons and viewed through two apertures on the dial.

These various functions are accompanied by a poetic invitation to celebrate one’s own lucky day. Using a rotating bezel, the watch’s owner can select the day of his choice by positioning a red triangle against a graduated calendar. On that date, the Earth will move to a position directly below the star engraved on the sapphire crystal, as a sign of good luck.

The Maison has applied its jewelry-making expertise to depicting the planets with a selection of hard stones: turquoise for the Earth, serpentine for Mercury, chloromelanite for Venus, red jasper for Mars, blue agate for Jupiter and sugilite for Saturn. Intricately sculpted by hand into spheres of different dimensions and colors, they are positioned round a sun in pink gold. Each of these elements, along with the shooting star in pink gold, is fixed on its own aventurine disc. With their scintillating deep blue hue, the latter are arranged around the center in perfectly concentric alignment.
Painstaking attention has been given to selecting the stones, then sculpting the discs and spheres in order to give form to this animated tableau, with its combination of jewelry and watchmaking savoir-faire. 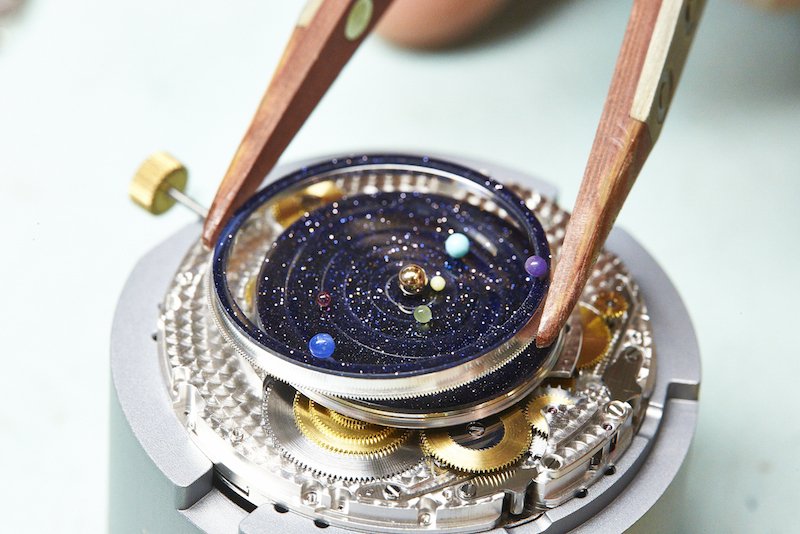 With the Extraordinary Dials collection, the watchmaker’s art is enhanced by that of the enameler, the engraver, the lapidary, the miniature painter and the stone-setter, among others. Each dial is crafted like a miniature picture and requires dozens of hours to complete. Treating a broad range of inspirations, traditional crafts combine to illustrate the creativity and excellence of the Maison. This year’s creations evoke the theme of Poetic Astronomy, unveiled at the SIHH 2014. From engraving on gold or mother-of-pearl to champlevé, vallonné and grisaille enamel, mother-of-pearl and hard stone marquetry and stone-setting, Van Cleef & Arpels breathes new life into these techniques to depict the poetry inherent in each dial.