Ulysse Nardin is acclaimed for its thousands of “firsts” in watchmaking, and the launch of the 2001 Freak turned the industry upside down and positioned Ulysse Nardin in a realm all its own. The implementation of silicium was one of the Freak’s hallmarks.

Due to the unconventional design of the Freak’s tourbillon carrousel – one that possessed no traditional dial, crown or hands – and being the first timepiece to successfully present escapement wheels constructed of silicium, the Freak forever changed the course of haute horology. The Freak Phantom pays tribute to the revolutionary Freak by expanding its use of silicium and taking its tourbillon to new heights.

Covert-like in appearance, the Freak Phantom is a timepiece  of true invention. A limited edition of 99, it uses silicium in its patented hairspring (Si 1.1.1.) and throughout the majority of its escapement. The entire movement of the Freak Phantom, including the oscillator, is produced  in house and offers a lengthy power reserve of more than eight days.

Its performance  is enhanced through its application of cutting-edge technology in the two ball-bearing systems; the balance-wheel concept and design; and the flying tourbillon that indicates the minutes with a tourbillon  carrousel that does one complete rotation around the center in 60 minutes.

The cage of the Freak Phantom is equipped with an arrow indicating the seconds on a transparent half- circle, rotating in one minute on itself, with the zero position holding steady on the axis of the minute indicator. The two specially conceived ball bearing systems enable the “flying” function of the minute movement and of the seconds-indicator tourbillon without the need for a supporting bridge. 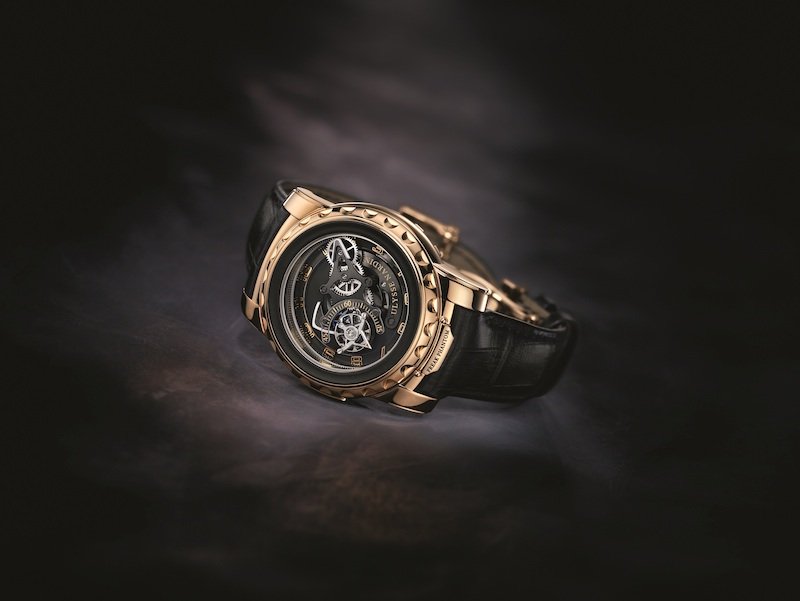 Simple and user-friendly, the Freak Phantom can be wound by turning the lower bezel, and the time can be adjusted by turning the upper bezel; while the direct gear link crafted between the three “hands” averts dephasing, or the throwing of hours, minutes and seconds out of step when adjusting or readjusting time.

Complementing its exacting function is its confident style. Boldly masculine, its movement, presented in a shade of black, conveys an identity of silent strength, while its 18-karat rose-gold case reveals optimal elegance. It is a juxtaposition of ingenuity and beauty, carrying on the unexpected character of the Freak collection.