Here it is… The world’s thinnest automatic flying tourbillon! A technological achievement born from two years of research and development, Parmigiani Fleurier‘s Tonda 1950 Tourbillon has won the battle against gravity in the thinnest of forms.

Directly integrated in the main plate, the 3.4mm micro-rotor in 950 platinum determines the thinness of the PF517 movement without adding an extra layer to the thickness. Further economizing on space, Parmigiani Fleurier created a “flying” tourbillon boasting a cage mounted on a single support bridge, with a highly sophisticated ball bearing replacing the mounting function. The watchmaker also made its blued steel seconds hand an integral part of the cage, counterbalancing the weight of the other components that compose it.The tourbillon’s constant revolutions improve the timepiece’s chronometry by distributing the effects of gravity over the complete rotation and eliminating disruptive effects on the mechanism. 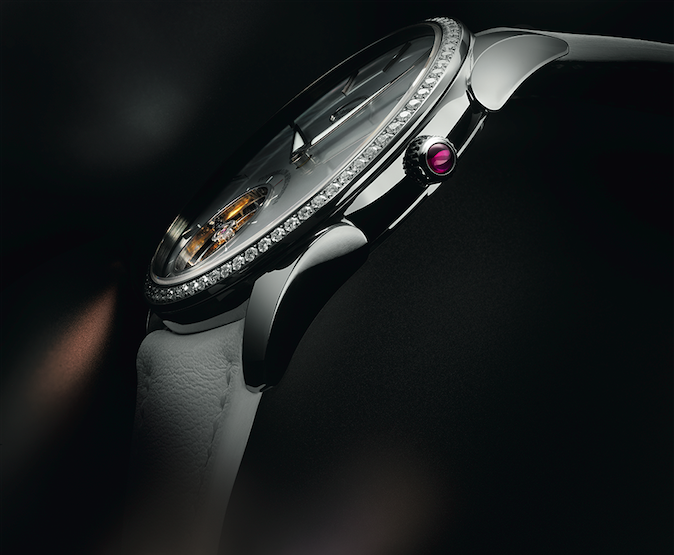 In its efforts to also produce the world’s lightest tourbillon cage, the watchmaker opted for titanium, which, despite being very flammable during machining and very difficult to produce in such small dimensions, ensures a minimal weight 0.255g for the cage. The Tonda 1950 Tourbillon is now available in five dial versions: grey mother of pearl, white or black jade, grained white, and blue abyss with Côtes de Genève decoration.

Interestingly enough, the entire aesthetic direction of the Tonda 1950 Tourbillon is based on the notion of 07:08, a nod to the brand’s founder who was born at exactly this time in the Val-de-Travers in Switzerland. In that context, the complication is placed just after the 7 o’clock index to the left of centre, while the tourbillon’s orientation is determined by an angle corresponding to 07:08.