Building on the global success of its latest RJ collaboration creation, the Skylab Batman, RJ has tied up again with Warner Bros. Consumer Products, on behalf of DC Entertainment, for a new unique collaboration, giving life to two of DC Comics‘ infamous villains, The Joker and Two-Face, as limited edition watches. The Villains editions mark the first use of RJ’s signature collection Arraw as a base for “The Joker” Chronograph and “Two-Face” skeleton models.

This is one of those times where you have to hail villains. To admit you love them and describe them as awesome. To recognize they changed your childhood even if they are your superhero’s arch enemies. Would Batman be who he is without The Joker and Two-Face? Debatable. Would you be a true DC Comics and horology fan without one of these watches on your wrist? Undisputedly not.

Channelling its dark side, RJ made sure the Villains collection is as unique as the two characters, from case and dial, to bezel and strap. The Joker, a self-winding chronograph, is completely inspired by Batman’s original nemesis since the very first edition of the 1940 DC comic. The Two-Face, with its manual winding skeleton movement and split design, reinterprets the complex and conflicted villain who went from district attorney to criminal. Each watch will be produced in a limited edition of 100 pieces only.

“It is a statement of confidence in RJ’s place in both popular culture and watchmaking that Warner Bros and DC Entertainment have collaborated with us to bring their most infamous villains to life as rare, limited edition collectors’ watches. The villains of the DC Comics universe have always appealed to audiences around the world for their evil brilliance and ability to shock and thrill in equal measure. We believe that our first two DC Comics Villains watches will be a fitting tribute to their spirit of anarchy and disruption,” shared RJ Watches CEO and Creative Director Marco Tedeschi. 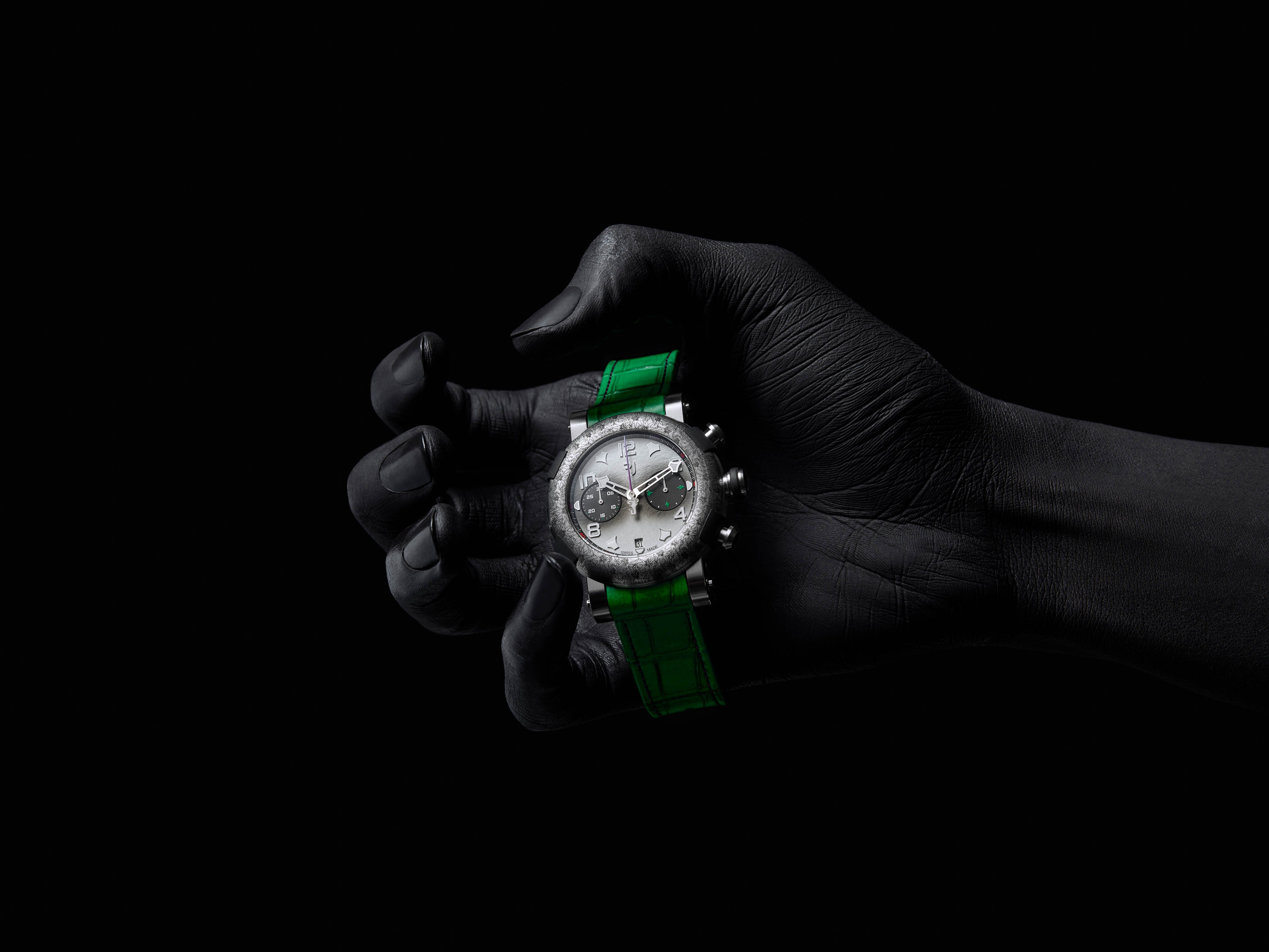 The Joker, an everlasting smile

The Joker chronograph boasts a new, circular satin-brushed 45mm titanium ARRAW case, with its four iconic rubber bumpers, distinct lugs and arrow-shaped hands. Just like the villain’s all-over-the-place personality, the titanium bezel is laser engraved with an intentionally chaotic Joker motif. Each Joker dial, individually hand-painted so that no two Joker watches have the exact same face, is a stylistic interpretation of the Joker’s own face, with an intricately airbrushed finish evoking the Gotham villain’s makeup.

The ARRAW hands are uniquely stylized with playing card ‘Aces’ at their tips, the same as those used as dial markers. The chronograph’s second hand is finished in Joker Purple with a ‘J’ at its base. The reverse of the titanium case features a bold laser-engraved portrait of the Joker, and is individually numbered as a ‘One of 100 Limited Edition’.

Every RJ Joker watch comes with three interchangeable straps. Colorful alligator skin versions in bright green or purple with contrast stitching match the Joker’s hair and clothing and can be easily swapped by simply pressing the Batman logo release screw on the watch lugs. Each leather strap is lined in hard-wearing rubber, while a third full-rubber black strap is also provided. Each strap is fastened using a titanium deployment buckle clasp.

As part of the collectors’ edition, each watch will be presented with an exclusive deck of Joker playing cards. Now, if that’s not guaranteed to put a smile on your face, we’re not sure anything will!

Two-Face, from ally to foe

The RJ Two-Face depicts the concept of duality, the classic struggle between good and evil. Just like nice-boy District Attorney Harvey Dent was horribly disfigured with sulphuric acid by mobster Sal Maroni, splitting both his face and his personality in two, the watch uses a skeleton movement and distressed design cues to evoke the twisted physical and mental state of the crazed criminal, using watchmaking techniques that are exclusive to the brand. Immediately distinguishable thanks to its “two-faced” bezel and dial, the watch reflects Two-Face’s opposing personalities: the clean, structured left side carries a laser-engraved coin, which Two-Face famously spins to make life and death decisions and which, serving as a turning second hand, while on the right side, the three-layer skeleton movement reveals the inner workings of the watch, as if acid had burnt away the outer casing and dial. Talking about the split design process ,Marco Tedeschi admitted: “Recreating his scarred face and exposed features has been a fantastic challenge and has forced us to push the envelope of what is possible when the worlds of horology and comic culture collide.”

The Two-Face watch uses a half-exposed manual skeleton movement designed by RJ, and featuring chamfered edges and straight angles sitting within a circular satin-brushed 45mm titanium ARRAW case. Like the watch itself, the calf leather strap is designed to have a clean and distressed side. Using a process unique to RJ, the right edge of the strap is given both a visual and tactile nature. The strap can be changed by pushing the release buttons in the form of original Batman logos on the case lugs. 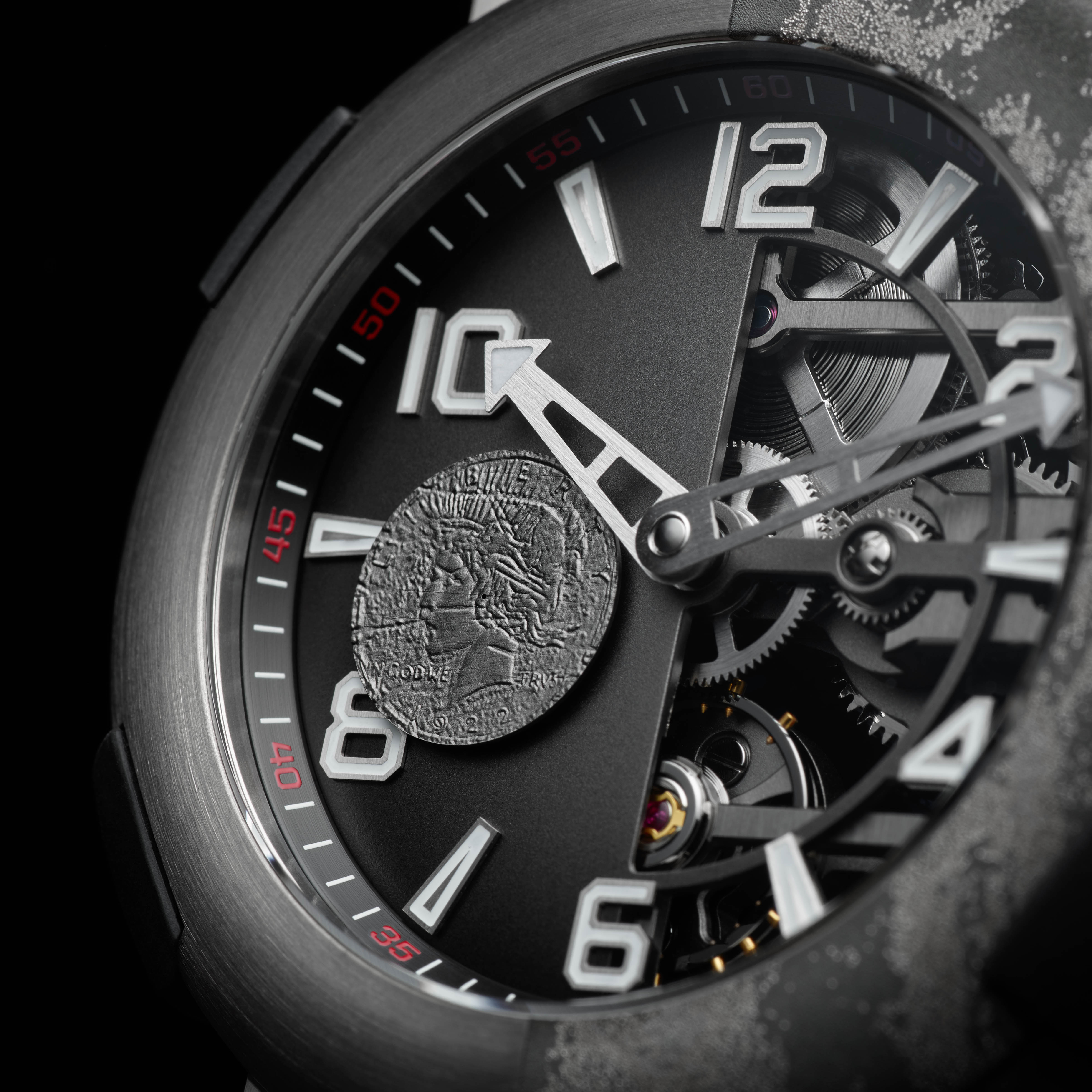 The reverse of the titanium case features further laser-engraved distressing and each watch in the edition is individually numbered as a ‘One of 100 Limited Edition’. As part of the collectors’ edition, each timepiece will be presented with an exclusive Two-Face coin, specially struck to commemorate the creation of the watch.

Let’s sum up this new collection with a simple word: wicked!!