A Peek Before The SIHH Week!

This upcoming January, the 28th edition of the SIHH will bring visitors not only watch novelties, but also new elements to the Salon itself in an effort to meet the demands and preferences of an ever-changing environment. From the redesigned reception areas with easier access and improved security, to the brand-new “SIHH Live” designed like an actual TV set aiming at providing a fast-paced communication and content creation platform, the 35 exhibitors, the press and the general public have a lot to look forward to. And while we get ready for that journey, let’s whet your appetite with a quick look at some of the novelties that have been revealed ahead of the Salon, from an “Homage to Walter Lange” (A. Lange & Söhne) to a fiery “Vortex” (Hautlence)…

A. Lange & Söhne – 1815 “Homage to Walter Lange”
​Exactly one year after the passing of its founder Walter Lange, A. Lange & Söhne is commemorating the great man by enriching its 1815 model family with an extraordinary complication: The 1815 “Homage to Walter Lange”. The new timepiece has a stoppable jumping seconds hand that dates back to a 150-year-old invention conceived by Ferdinand Adolph Lange. Available in three editions: 145 white gold watches; 90 in pink gold; and 27 in yellow gold, the new models highlight important milestones of the Lange family’s history: from 7 December 1845, when Ferdinand Adolph Lange originally established the company, exactly 145 years elapsed until 7 December 1990, the date on which Walter Lange registered Lange Uhren GmbH. So, exactly 27 years will have passed between this date and 7 December 2017. The 1815 “Homage to Walter Lange” with a black enamel dial and steel case will be produced only once, making it as unique as the man whose name it bears. It will be auctioned off for charity later in 2018.

Greubel Forsey is one of the young brands known for its constant search for revolutionary breakthroughs in the watch industry. After intensive research on the mastery of nano-energy within its Mechanical Nano project, the brand has announces a new breakthrough in mechanical watchmaking and presents the first Nano Foudroyante EWT. The Mechanical Nano applied to the foudroyant jumping seconds ensures that less energy is used -with a reduction of the amount of energy consumed by a factor of 1,800; and that 96% less space is needed as compared to a conventional mechanism. This new watchmaking complication consists of a hand that makes one rotation every second to indicate the fractions of a second. This first Mechanical Nano application focuses on the reduction of inertia and on the energy savings it made possible, and the display of the Nano Foudroyante EWT is by a miniature hand. This is made clearer to read by an optical system with 23x magnification. Hats off to Robert Greubel, Stephen Forsey and their teams!

Lava… One of nature’s most captivating and powerful materials… That’s what inspired Hautlence‘s latest watch, the Vortex Gamma Magma. Taking on the color and the undeniable force of lava, the piece has a hypnotizing effect with the design of its case, driven by angles and facets. To give its HL2.0 manufacture calibre’s showcase .a vibrant aspect, the brand used HLLightColor, a material which can be body-tinted to take on a specific shade of any color. The Vortex Gamma Magma model is made of a revolutionary composite material borrowed from the automotive and aerospace industries, and is composed of six three-dimensional sapphire crystals. To emphasize the architectural lines of the Vortex case, accentuating them with a play of striking contrasts, Hautlence has drawn inspiration from the TRON style, stemming from the eponymous sci-fi film directed by Steven Lisberger in 1982.

Jaeger-LeCoultre carries on its partnership with bootmaker Casa Fagliano in 2018 with a 100-piece limited edition Reverso Tribute Duoface. The timepiece features a pink gold case is mounted on a two-tone cordovan leather strap, in proper testament to the Argentinean firm’s expertise in hand-made polo boots. In line with the Duoface style, the new edition displays two time zones, one on the slate gray satin-brushed sunray finished dial, and the other on the opposite side, with a day/night indicator on the opaline dial. The Reverso Duoface Tribute is limited to 100 pieces.

2018 marks the 20th anniversary of Montblanc‘s famed Star Legacy Collection; celebrating that milestone, the ‘snow-capped mountain peak’ brand is presenting two new Star Legacy chronographs, including the Star Legacy Automatic Chronograph. This design falls within the brand’s core DNA, with an enhanced finishing and a more sophisticated look. Inspired by the Minerva pocket watches Montblanc is well known for, the new model features a round case with a curved sides. The blue, hand-crafted, Sfumato alligator leather strap adds a contemporary touch to this redesigned vintage piece. Incidentally, we have a big surprise to share during SIHH, where we’ll be revealing our exclusive images of one of the brand’s biggest novelties of the year…

Hot on the wheels of the launch of its Excalibur Aventador S in partnership with Lamborghini, Roger Dubuis is presenting at the SIHH a new version of the “racy” timepiece, this time with a pink gold bezel, a carbon case and black Alcantara strap. The twin sprung balances are mounted at 90° in a movement based on the engine of the namesake supercar. With their “Raging Mechanics”, Roger Dubuis, Lambo and the new Excalibur Aventador S definitely “dare to be rare”! We’re keeping an eye out for more from the watchmaker.. 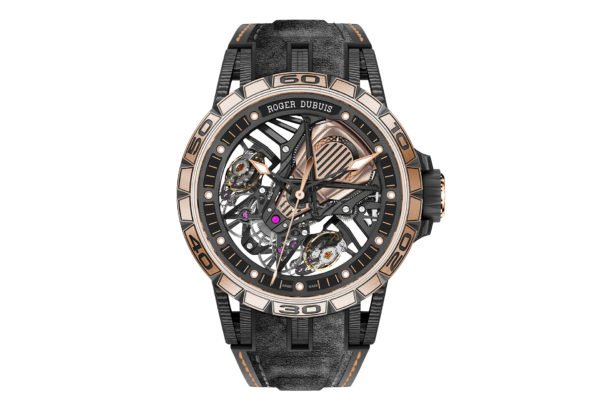