Nico Rosberg and Lewis Hamilton Present Their Own IWC Watches

Apart from their professional interest in FORMULA ONE, Lewis Hamilton and Nico Rosberg also share a passion for mechanical watches. As brand ambassadors of IWC Schaffhausen, they had a hand in the design of their own watches, and, prior to the first practice sessions on the track, appeared for their presentation at an IWC event in Singapore. “Lewis and Nico are not only unique personalities and incredibly successful sportsmen but also very creative. They were both immediately very interested in the idea of launching two limited special edition watches. I’m confident that these unusual timepieces will be equally popular with motorsport enthusiasts and watch connoisseurs,” explains Georges Kern, CEO of IWC Schaffhausen. Indeed,the results are impressive: the Ingenieur Chronograph Edition “Lewis Hamilton” (Ref. IW379602) has a distinctlytechnical appeal, while the Ingenieur Chronograph Edition “Nico Rosberg” (Ref. IW379603) is both lighter and sportier in appearance. The main aims of the collaboration between IWC and the two outstanding MERCEDES AMG PETRONAS drivers were to equip both teammates with a personalized and characteristic watch and to adapt the concept of “performance engineering” to the successful Silver Arrow drivers. “Lewis and Nico surprised us with their concrete ideas as to how their ideal watches would look,” says Christian Knoop, Creative Director of IWC Schaffhausen.“You felt clearly that they both have an individual affinity for watches. They demonstrated a great deal of understanding and aesthetic sensitivity during the design process and made a contribution to the final result.”

AT HOME OUT ON THE CIRCUIT 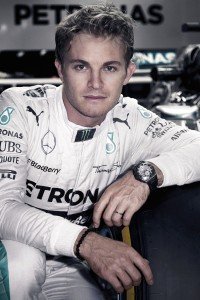 The fact that the watch chosen was a chronograph from the Ingenieur family was no coincidence. First, the chronograph is the epitome of sports timing; and, second, the Ingenieur collection pays tribute to the global partnership between IWC and MERCEDES AMG PETRONAS with materialstypically used in motorsport, such as titanium, carbon fibre and ceramic. For both Nico Rosberg and Lewis Hamilton, the only conceivable material for the case was titanium. With a satin finish, the light grey metal used for the high-performance components in motorsport is particularly appealing. The rugged timepieces have been equipped with one of the most efficient movements manufactured entirely by IWC, the 89361 calibre. Specially developed for this movement design, the IWC double-pawl winding system is one of most efficient drives used in haute horlogerie movements from IWC. The upper totalizerdisplaysclocked hours and minutes as clearly as the time of day. Stopped times up to one minute are measured by the central seconds hand. Another very practical feature for anyone who frequents the world’s racing circuits is the flyback function for measuring pit-stop times. Both of the special editions, which are each limited to 250 watches, have a special feature on the reverse side: inset into the titanium case back is a medallion of carbon fibre, which may well show signs of wear and tear. A certificate suppliedwith each watch confirms that the material originally comes from one of the Silver Arrow cars used by MERCEDESAMG PETRONAS. The back of the watch is sealed with a water-resistant sapphire glass that bears the personal logo of Nico Rosberg or Lewis Hamilton on the inner surface.

When Lewis Hamilton visited IWC’s workshops a year ago, he was particularly impressed by the expertise and pioneering approach of the company’s watchmakers: “My tour of the premises showed me just how much pride, passion and commitment is behind IWC’s astonishing success.” He subsequently participated in a workshop with the design team to test the effects of various materials, colours and surface structures. “I wanted to have a watch that featured a lot of technology,” says Lewis Hamilton. “With its carbon dial, push-buttons, crown, crown protection and zirconium oxide screw heads, this watch directly reflects the high-tech materials used in FORMULA ONE.” The racing driver prefers metal bracelets and chose rugged, skin-friendly titanium for the Ingenieur Chronograph Edition “Lewis Hamilton”. In doing so, the technophile Mercedes driver also created the only watch in the entire IWC collection with a titanium bracelet. 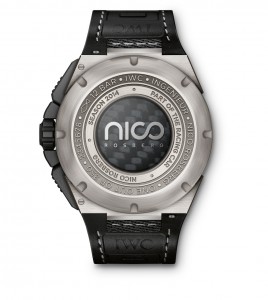 As a teenager, teammate Nico Rosberg received an IWC watch as a gift from his father and ever since has had close links with the luxury watch manufacturer. At an IWC event in Munich last year, Nico Rosberg swapped his racesuit for a watchmaker’s overall and, as a participant on an exclusive watchmaking course, demonstrated his feel for technology and fine craftsmanship. “For me, IWC watches epitomize not only complex technology and unmatched performance but also passion and emotions,” is how Nico Rosberg sums up his impressions. “These were also the elements that I wanted my watch to embody. I was certain that the combination of my favourite material, titanium, with the black strap and the bright dial would create a striking contrast.” He drew up the initial designs for his Ingenieur Chronograph Edition “Nico Rosberg” together with Christian Knoop. The silver-plated dial gives the titaniumcase with a crown, crown protection and screw heads made of zirconium oxide a light, sporty appearance. The yellow colour of the seconds hand and of the hands in the totalizer at “12 o’clock” recalls the neon yellow helmetthat was Nico Rosberg’s trademark for 7 years. The watch features a rubber strap, which has an added touch of luxury with its embossed calfskin inlay and grey quilted stitching. 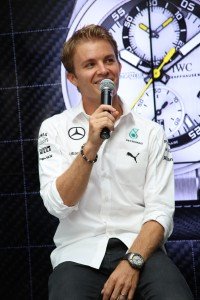 IWC Schaffhausen is also pleased to announce the renewal of its current partnership with the MERCEDES AMG PETRONAS Formula One™ Team for a further 3 years. IWC became the team’s Official Engineering Partner at the start of the 2013 racing season and has now confirmed its commitment until the end of the 2018 season. “We and the racing team’s technicians are linked by a common passion for outstanding engineering, skilled craftsmanship and innovation,” says Georges Kern. “And with the team’s driverswe share a desire to deliver ultimate precision and unmatched performance.” IWC Schaffhausen and AMG, the performance brand of Mercedes-Benz, laid the cornerstone for a long-term partnership as early as 2004. Their cooperation was founded on a mutual desire to explore the limits of mechanics and advanced technology.