Strapped around his spacesuit, Buzz Aldrin had an OMEGA Speedmaster Professional chronograph. Neil Armstrong had left his own Speedmaster aboard the Lunar Landing Module as a reliable backup to the electronic timekeeping system.

The OMEGA Speedmaster Professional Apollo 11 45th Anniversary Limited Edition wristwatch commemorates the first lunar landing and celebrates its link to the iconic chronograph that was part of the adventure. 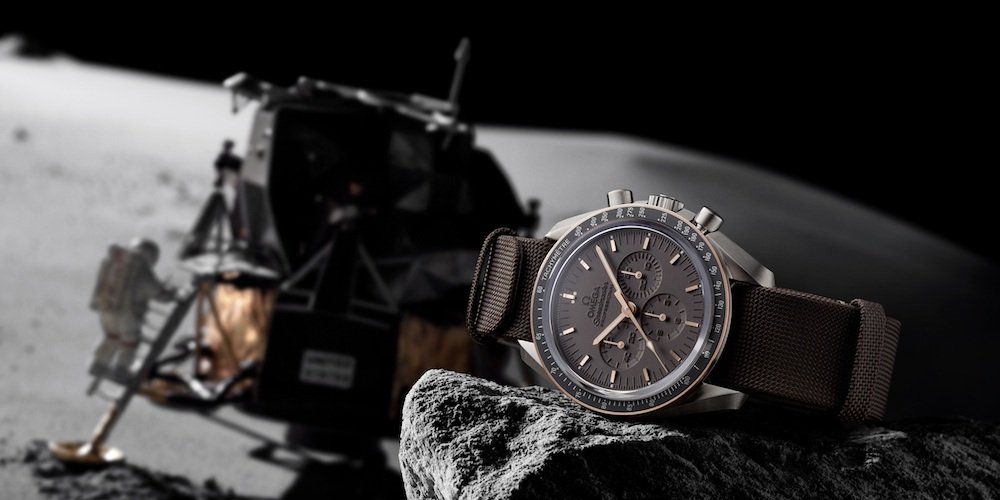 Recalling the colours of the Moon and the Apollo 11 lunar and command modules, the Limited Edition timepiece features a 42 mm completely brushed grey grade 2 titanium case with a touch of gold.

The black PVD dial, with its 30-minute and 12-hour recorders and small seconds sub-dial, has been produced using a special laser which creates the design elements on the watch’s face by removing the material surrounding the name, sub-dial numerals and hour markers. The indexes and hour, minute, seconds and sub-dial hands are crafted from 18K red gold and the central chronograph hand is red gold-plated. Super-LumiNova coating the hour, minute and chronograph seconds hands as well as the hour markers and two dots at 12 o’clock emits a green light.

A box-form scratch-resistant sapphire crystal coated with anti-reflective treatment on both sides protects this impressive dial. The 18K OMEGA Sedna™ gold bezel is enhanced by a matt black ceramic ring with a tachymeter scale, a defining element of the Speedmaster collection.

The screw-in caseback is embossed with the iconic Seahorse emblem and the outer circle is engraved in black with “FLIGHT QUALIFIED BY NASA FOR ALL MANNED SPACE MISSIONS”, “THE FIRST WATCH WORN ON THE MOON” and “APOLLO 11, 45th ANNIVERSARY, LIMITED EDITION, 0000/1969”.

Another striking feature of the Speedmaster Professional Apollo 11 45th Anniversary Limited Edition watch is its brown coated nylon fabric strap which is inspired by the NATO straps that have equipped the timepieces issued to military personnel since the Second World War.

Only 1,969 models of this timepiece will be produced; the number of the limited edition timepieces reflects the significant year that the first humans walked on the Moon. The Speedmaster Professional Apollo 11 45th Anniversary Limited Edition wristwatch is fitted with the calibre 1861, a manual-winding chronograph movement. It is offered with a two-year warranty and a special presentation box. This remarkable timepiece is water resistant to 5 bar (50 metres / 167 feet) and comes with a special presentation box and a certificate of authenticity.