A. Lange & Söhne’s most complicated wristwatch ever presented in the Middle East

The GRAND COMPLICATION features a host of fascinating functions and yet again perfectly showcases the ability of the Saxon master watchmakers to conquer ever new peaks with their undisputed ingenuity. Beneath the lucidly configured enamel dial, the horological opus with the calibre designation L1902 incorporates scores of lavishly finished parts, bringing to life the most elaborate complications which the art of haute horlogerie has to offer: chiming mechanism with grand and small strike, minute repeater, split-seconds chronograph with minute counter and flying seconds as well as a perpetual calendar with moon-phase display.

“We are proud to present the GRAND COMPLICATION for the first time in the Middle East, showcasing a piece of history for A. Lange & Söhne. It is not only the most complex, intricate and technical timepiece that we have ever crafted – but one of the most complicated in the world. Realising the creation of such a timepiece, limited to 6 pieces only over the next 6 years, underlines the incredible ability of our master watchmakers and product development team to take our technical capacities and creativity into a new era. This is what entering unchartered territory is all about, and we have succeeded with yet another masterpiece,” said Matthieu Dupont, Middle East Brand Director, A. Lange & Söhne.

A sound of inimitable purity

Two carefully hand-wrought gongs produce the seductive tones of the minute repeater and of the hour and quarter-hour strikes. The GRAND COMPLICATION is endowed with a chiming mechanism that automatically indicates the time in the grand strike (grande sonnerie) or small strike (petite sonnerie) modes. Every fifteen minutes, when set to grande sonnerie, it first indicates the full hour on the low-pitched gong and then the quarter-hours with a double strike on both gongs. In the petite sonnerie mode, it indicates the elapsed quarter-hours with one, two, or three double strikes on both gongs. At the top of every hour, it strikes the time in hours on the low-pitched gong.

It is no coincidence that the grande sonnerie is considered to be one of the most challenging of all complications in watchmaking. It imposes extreme requirements on the perfect interaction of intricate mechanisms crafted from materials of the highest quality by exceptionally talented and experienced watchmakers. “Free, with no shake” – that is the mantra which governs the interplay between moving parts to such a degree of accuracy that they deliver a precise strike and sound with unmatched purity.

When the slide in the case flank is actuated, the minute repeater indicates the time on demand with two gongs: The hours sound with low-pitched tones, the quarter-hours with double-tone strikes, and the minutes with high-pitched tones. At 7:52, for instance, the melody consists of seven low tones, three double strikes, and seven high tones. 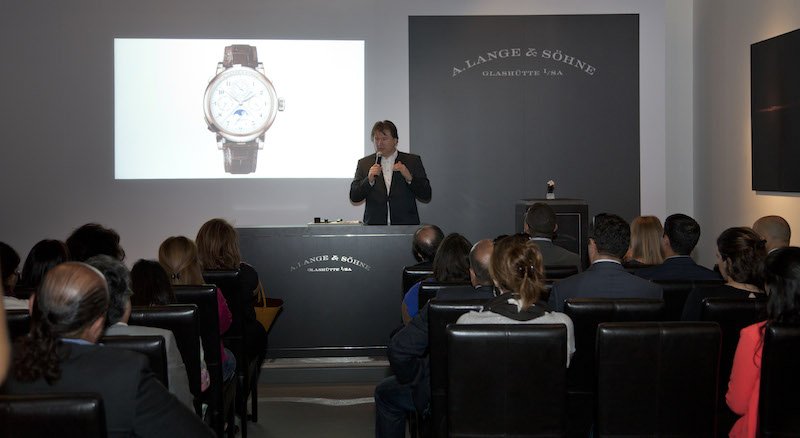 Accurate to one-fifth of a second 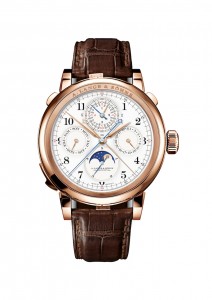 The chronograph of the GRAND COMPLICATION is a monopusher type (chronographe monopoussoir) with a rattrapante function and flying seconds (seconde foudroyante). This rare supplementary function makes it possible to freeze stopped times to fifths of a second. A blued-steel hand on the lower subsidiary dial performs five jumps to complete each revolution along its five-second scale while the chronograph is running. Thus, the hand precisely emulates the balance frequency of 2.5 Hz.

A gold chronograph hand and a blued-steel rattrapante hand for stopping lap times sweep the main dial from the centre. They begin to run, together with the flying seconds, as soon as the pusher between 1 and 2 o’clock is pressed. After each revolution of the sweep hands, the minute counter hand in the dial at 12 o’clock advances by one interval.

When the pusher between 10 and 11 o’clock is activated, the blued-steel split-seconds hand will stop to indicate the lap time while the gold chronograph hand continues running. When the pusher in the left-hand flank of the case is pressed again, the split-seconds hand instantly catches up and then remains realigned with the chronograph hand. When the right-hand pusher is actuated, all four chronograph hands will stop. Pushing the button a second time resets them all to zero. Both mechanisms are precisely and reliably controlled in the classic manner via two column wheels – one each for the chronograph and rattrapante functions.

A calendar for eternity

The perpetual calendar mechanism not only knows the different durations of all months in the course of a year, it is also aware of the fact that February has 29 days in leap years. The mechanism first needs to be corrected by one day in the year 2100. This is because of special rule in the Gregorian calendar which stipulates that the leap year is omitted if the year is not divisible by 400. The duration of each month is coded into a 48-segment wheel with recesses that are mechanically sampled by the date switching lever. The deeper the sampled recess, the shorter the current month.

Another special feature of the calendar is that it advances all displays, with the exception of the moon phase, at midnight. The calendar indications are positioned at 3, 9 and 12 o’clock. The subdial on the right indicates the date, the one on the left the day of the week, and the upper one the month in the four-year cycle. The upper half of the flying seconds dial exposes the blue-enamelled, solid-gold moon disc that precisely tracks the synodic lunation of the earth’s companion. 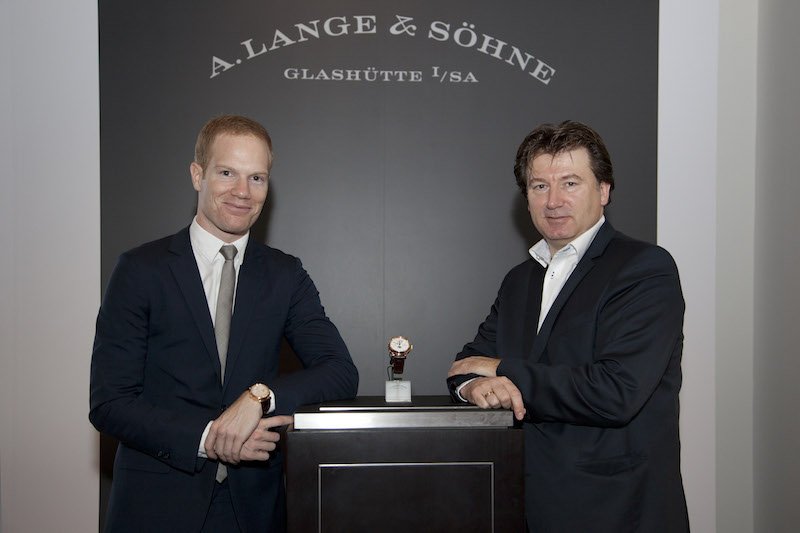 Tribute to a grand tradition

The face that conceals the complex movement of the GRAND COMPLICATION is a multi-part white enamel dial with Arabic numerals, a railway-track minute scale, and the four characteristic, symmetrically arranged subsidiary dials. A suite of time-consuming process steps is needed for each of the five dial elements to assure the flawless appearance of the composite dial. The heart of the exclusive manually wound movement is a balance that beats with a frequency of 18,000 semi-oscillations per hour. As a tribute to Ferdinand A. Lange, who established Saxony’s watchmaking heritage, the watch incorporates a Glashütte lever escapement based on one of his early inventions. Its lever and escape wheel are made of hardened 18-carat gold. The lever is designed to be in perfect equilibrium. A slight camber of the covered pallets prevents any adhesion with the escape wheel. The perfect execution of these intricate design features contributes to the enhanced rate accuracy of the watch. The oscillator is paired with a balance spring crafted in-house. When the mainspring is fully wound, it delivers a power reserve of 30 hours.

All parts of the complex manual winding movement are manufactured and lavishly finished by hand to the strictest Lange quality criteria. At several points, Lange’s master watchmakers took the amount of work invested in finissage to unprecedented levels: For example, all chronograph levers are black-polished. The exclusive collectors’ item in the 50-millimetre pink gold case comes in a limited edition of six watches. Thus, the GRAND COMPLICATION is not only immaculate from the technical point of view, it is also a rare horological work of art.