Jaeger-LeCoultre instills the Grand Complication  with the radiance it deserves.

The essence of the watch lies in its interpretation of astronomical timekeeping for the wrist. And there could be no driving force more suited to this task than the pulsing heart of a flying tourbillon orbiting the dial, depicting a sky-chart of the northern hemisphere. A sun performs a full revolution in 24 hours around the rim of this exceptional creation, thereby displaying a 24- hour indication, zodiac signs, as well as the days and months appearing on a circular scale surrounding the dial. Its precision is based on advanced technology, with a flying tourbillon setting the pace within an ultra-light titanium cage.

Additionally, the watch incorporates a minute repeater in which the sound is generated by two crystal gongs directly fixed to the sapphire crystal. Equipped with ‘trébuchet hammers’, the Grande Complication watch offers a sound of unprecedented clarity and fullness, at a simple push of the dedicated slide.

Its classically shaped white gold case, along with the decoration of the movement parts in keeping with the finest horological traditions, testify to the prodigious sum of techniques and knowledge acquired by the Manufacture in the field of Haute Horlogerie throughout its 181 years of existence. The gem-setting motif conceived by designers accentuates the distinctive architecture of the Master Grande Tradition case. The crown is meticulously set with baguette-cut diamonds, while two rows of baguette-cut diamonds extend to the right and left of the crown to adorn the convex-shaped side of the case, and descend to the lugs.

A sky chart and a zodiacal calendar

A day is basically defined as one rotation of the earth around its own axis. Depending on which point of reference is used, astronomy distinguishes between a solar day and a sidereal day. The former is measured with the sun as reference, while the latter uses other, more distant fixed stars.

Since the earth orbits around the sun as well as upon its own axis, the solar day is slightly longer than the sidereal day, differing by about one degree, meaning almost four minutes. To underline these celestial ambitions that make the watch a perfect instrument for astronomical observations, the sky disc performs a rotation in 23 hours and 56 minutes, meaning one sidereal day. Moreover, a zodiac calendar is placed around the rim of the dial together with a month indication to further depict the position of the constellations at any given time of the year, with a perpetual calendar regulating the timing system.

The technical nature of the dial is heightened by subtle aesthetic touches that lend it an air of nobility and distinction. The dark blue aventurine sky disc illuminated with diamond stars is surrounded by two crescents of baguette-cut sapphires in lighter shades of blue. The blue becomes even lighter on the hand-guilloché lacquered disc bearing the indications of the month and zodiac signs. These subtly graded shades create a depth effect on the multi-layered watch dial testifying to the masterful skills of the in-house designers and artisans. The diamond hour-markers echo the stars, while the radiant bezel creates a splendidly luminous glow for this Grande Complication.

The tourbillon and the silicon escapement parts

Contrary to the traditional construction based on both lower and upper bridges, a flying tourbillon is held only on the movement side and thus features a single cantilevered pivot. The entire mechanism consists of 73 parts and measures 12.42 millimetres in diameter and 3.85 in height. Built of lightweight titanium, the carriage is reduced to its bare functional essence in order to provide an unobstructed view at the escapement system. It is fitted on a lubricant-free ceramic ball bearing system. The 10-millimeter monometallic balance wheel with its regulation screws and its balance spring with Breguet overcoil has an inertia of 11.5 mg cm2 and beats at a high 4 Hz frequency.

The silicon parts of the escapement, such as the lever with its integrated pallets and the escape wheel, are thus clearly visible. This escape wheel is a completely new design in order to meet the most recent demands in terms of lightness and easy handling. The lever with integrated pallets has a straight shape ensuring better aerodynamics. Using silicon parts, which require no lubricants, not only improves the long-term precision of the watch, but also reduces the inertia of the components by about a third in comparison to the classically used steel. These improvements result in a 15 percent increase in the global efficiency of the escapement. 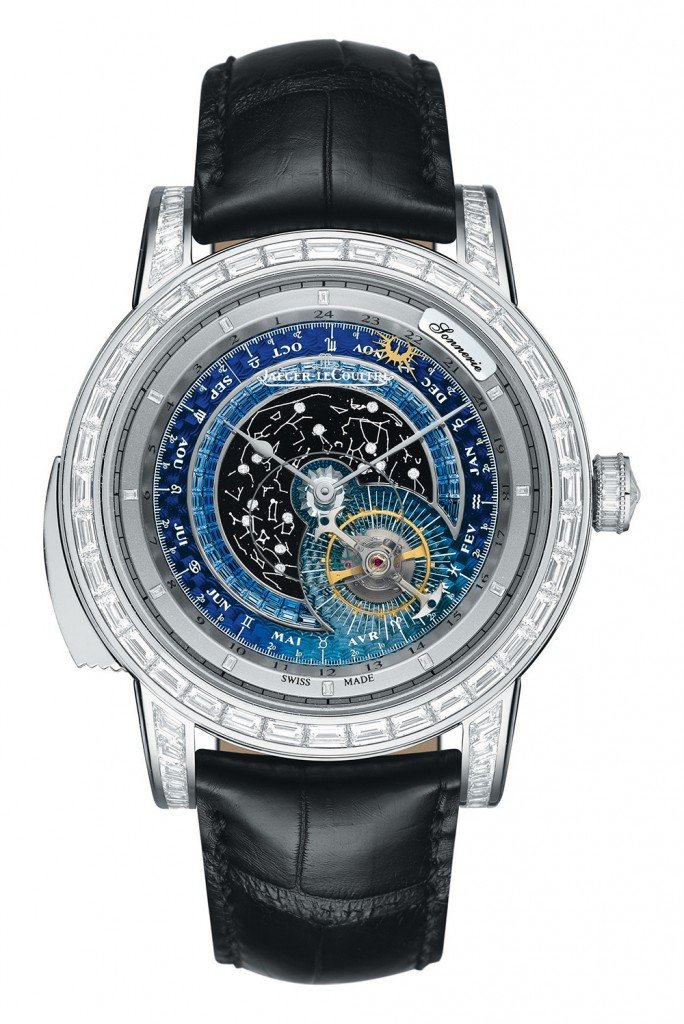 To provide an audible indication of the time, the Master Grande Tradition Grande Complication is equipped with an additional characteristic in the form of a mechanism sounding the hours, quarters and minutes on demand – a complication that would in itself make this a masterpiece.

The sound delivered by a musical watch relies heavily on the gongs, which are the essential sound-producing elements. To deliver the purest and most melodious possible sound, Jaeger- LeCoultre developed a new cathedral gong in 2010, procuring an exceptionally rich sound. These gongs are made of a special alloy and manufactured completely in one piece. Their cross section is square rather than the usual round shape, in order to provide a larger contact point for the hammer that can in turn strike more forcefully.

Generally speaking, the sound of a repeater gong is enhanced by the vibration of the case of the watch. In this instance, the experts of the Manufacture installed a different kind of ‘loudspeaker’, using their patented system in which the gongs are attached to a layer of metallic foil coated onto the watch’s sapphire crystal.

By pushing the dedicated slide on the side of the white gold case, the observer can admire through the back of the watch the sight of two small hammers in action. For this purpose, the watchmakers invented a special mechanism christened the ‘trébuchet hammer’ to improve the acoustic properties of the striking mechanism. Instead of a traditional hammer they devised a dual-axis-system with a special joint on a moveable arm. Once the mechanism is activated, the hammers are accelerated until they touch a small finger, whereupon a second moveable arm is released, thus helping to accelerate the hammers further shortly before the impact. This method utilises around 80 percent of the force applied by the spring, whilst traditional hammer systems only deliver a mere 10 to 30 percent of the power originally applied.

Manually-wound Jaeger-LeCoultre Calibre 945, launched in 2010, embodies the union between traditional watchmaking and contemporary technology with peerless elegance and refinement: all components are adorned with sunburst, circular-grained or snailed motifs, or feature a satin-brushed finish to accentuate the classical appearance of the construction. The steel parts are polished and bevelled, the adjustment screws are blued and the screws for the settings are rhodium-plated. Nonetheless, when viewing the dial side of the watch, the eye is drawn to another spectacular characteristic: the flying tourbillon is equipped with a high-tech escapement featuring the dark shimmer of silicon that creates a delightful contrast with the mirror polish of the grade 5 titanium tourbillon carriage.

The sapphire crystal caseback provides a chance to admire the refined finishes, while the dial is topped by a sapphire crystal framed by a domed bezel, underlining the classical look of the watch and further enhancing the appeal of this watch measuring 46.7 millimetres in diameter and elegantly concealing its respectable 15.92-millimetre height.

To prove the reliability of its construction, the Master Grand Tradition Grande Complication, once completely finished and cased up, is subjected to the 1000 Hours Chronometer Test – an extended version of Jaeger-LeCoultre’s famed 1000 Hours test, which also takes into account all aspects of the official COSC chronometer-testing procedures.

By bringing together within a single timepiece a substantial portion of Jaeger-LeCoultre’s fundamental expertise in the field of Haute Horlogerie, the Grande Complication proves itself a worthy member of the Master Grande Tradition line. It embodies the very essence