The Timeless Art of Paillonné Enameling by Jaquet Droz 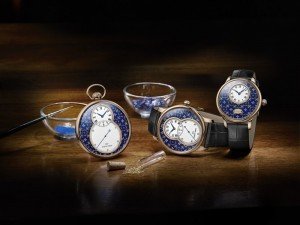 Paillonné enameling is a marriage of azure and gold, a design of infinite delicacy, a work born of incredibly high standards. The Jaquet Droz artisans have excelled in this ornamental technique since the 18th century,   and to this day they continue to make dials with the same extraordinarily meticulous care using the Grand Feu enamel process. This involves several firings at temperatures that can approach 1000 °C.  Only the trained eye can detect when the color is perfectly consistent and when the motif, picked out in gold paillons placed with surgical precision, has set under the translucent enamel fondant.

Today, the three new models – a 39 mm Petite Heure Minute, a 50 mm pocket watch and a recently added 43 mm Grande Seconde – pay tribute to an art that has endured for three centuries. The motif has been reinvented on each timepiece and plays with yet more circular forms to evoke the floral theme favored by Jaquet Droz. The blued steel hands echo the ultramarine dial, while the light in the red gold case, on a blue or black alligator leather strap, seems to reflect the gleaming paillons.

Each of the three models is a limited edition of 8. Not only are they a demonstration of the expertise found in the Jaquet Droz artisan workshops, they also offer new evidence that beauty created by the human hand transcends time.

The subtle mix of cool elegance 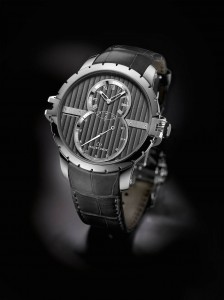 The Jaquet Droz Grande Seconde is immediately identifiable by its two off-centered dials that describe a figure eight with great purity of line. A uniquely incomparable timepiece since its inception, it is regularly reinterpreted by the brand’s artisans.

In 2008, Jaquet Droz launched the Grande Seconde SW, a sporty reworking of this iconic model that has only become more successful over the years. Six new versions will enhance the line in 2014, showcased by two diameters – 45 mm and, for the first time, 41 mm – each available in three intrinsically contemporary colors: gray, anthracite gray and blue.  The members of this beautiful trio all have alligator leather straps and are graced with a new Côtes de Genève decoration to give the Grande Seconde SW an ever greater aura of luxury.

The famous Côtes de Genève ornamental pattern typical of Swiss watchmaking has been used on the dials of these new models. A series of regular lines, the pattern highlights the watch’s features and gives it unprecedented depth.  The traditional rubber and metal strap has also been replaced by the fine luster of an alligator leather strap in a color to match the dial. It is an evolution thought through with the utmost care for a timepiece that exudes elegance hand in hand with a sense of luxury that increasingly asserts itself. It embodies, in change, the abiding spirit of Jaquet Droz. 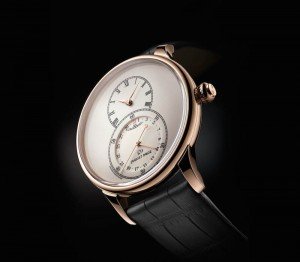 Jaquet Droz has written a new chapter in the story of the Grande Seconde by incorporating a silicon balance spring in the escapement of its movement and rethinking its aesthetic aspect.

The Grande Seconde Quantième, launched in 2011 and inspired by one of the brand’s legendary models, reveals a new face and movement this year, reenergizing the conventions upheld by Jaquet Droz and reaffirming its excellence as a watchmaker.

For the first time, major changes have been made to the movement with the addition of a silicon balance spring and inversed horns on the pallets fork. Silicon is a highly flexible material that only a small number of watchmaking brands have mastered how to use.  It can withstand shock and variations in temperature and pressure, and its properties allow it to remain unaffected by magnetic fields, maintaining perfect stability over time.

As with all its movements, Jaquet Droz plays with a range of fine finishing techniques: the plates are circular-grained above and below, the wheels are chamfered, shaped and circular-grained, the steel parts are chamfered and softened, and there are patterns of straight lines and hand-polished angles. All these features compose a unique aesthetic signature, visible through the watch’s transparent case-back. For the launch of the new Grande Seconde Quantième Ivory Enamel, the movement is further embellished with fanned Côtes de Genève decoration, which reinforces the brand’s identity.

Such modernity, however, is executed with state of the art perfection. The enlarged bridges and the finishes that bring together tones of gray and black give this model a more contemporary feel, all the while integrating perfectly with the brand’s decorative signature.

In tandem with these significant changes, the Grande Seconde Quantième Ivory Enamel’s dial, available in two versions – red or white gold with a diameter of 39 or 43 millimeters – has also undergone an aesthetic evolution. It has been double enameled using the historic Grand Feu enamel technique, peculiar to Jaquet Droz.  This gives a lower subdial of increased depth that accentuates the beautiful balance between the two subdials as they describe a figure eight, the brand’s lucky number.

By focusing on changes of a technical and aesthetic nature, Jaquet Droz has again expressed its watchmaking philosophy – the prioritizing of evolution over revolution, while in no way compromising its values of high standards and excellence in terms of both mechanics and ornament.

The Signing Machine – the art of automata interpreted by Jaquet Droz. 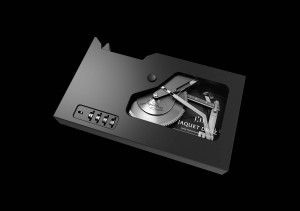 Almost three centuries have passed since Pierre Jaquet-Droz held the royal courts of Europe spellbound with his trio of renowned and strikingly realistic automata – The Writer, The Draughtsman and The Musician. The most astonishing of these was The Writer, because, even then, it could be programmed to produce a given sentence in a flowing script.  This truly legendary automaton is considered the precursor of the computer and has been the subject of numerous scientific studies, as well as a source of inspiration for Martin Scorsese in the making of the movie “Hugo.” The desire to keep such unique expertise alive has never left the Jaquet Droz artisans. The incredible Time Writing Machine, shown to the public in 2009, is proof of this, as are more recently, in miniature, the naturalistic animations featured on the dials of two exceptional watches – The Bird Repeater and The Charming Bird.

This year, Jaquet Droz has gone a step further with “The Signing Machine,” an amazing automaton that is profound for its time. A true marvel, it uses historic cam technology but in miniature size, while its dimensions are inspired by the most emblematic object of the new millennium – the smartphone.

The Signing Machine has a 4-digit security code and can be manually wound with a mechanism activated by a lever positioned on the side of the gray and black case. This entirely mechanical, technological gem, with its contemporary, uncluttered design, is manufactured as a bespoke piece for its owner. Simply pressing twice with your finger releases a hinged arm and pen. By means of highly complex movements, driven by a set of cams that are handmade in order to produce a fluid, natural script, The Signing Machine duplicates its owner’s signature. This operation can be admired through the transparent window that reveals the internal workings. In an age dominated by digital technology, it is a testament to the unique and magical beauty of the exceptional mechanisms bearing the Jaquet Droz hallmark.