The Evolution of the Diver’s Watches from Schaffhausen

“The Aquatimer is a distinctively masculine, dynamic and professional sports watch line, with a tradition dating back to 1967,” explains Georges Kern, CEO of IWC Schaffhausen.“The influence of legendary design elements and colours of the Aquatimer heritage is unmistakable. The design of the new generation, however, is more purist than that of its predecessors. It makes a powerful overall impression, effectively accentuated by the new, innovative rotating bezel,the hallmark of the IWC Aquatimer watches.” The fact that the new Aquatimer watch collection is being launched against the stupendous backdrop of the Galapagos Islandsis no coincidence. “Very few regions on Earth are home to such a fascinating diversity of species, both on land and in the ocean, as this unique archipelago,” continues Georges Kern. “Our Aquatimer watches are the perfect companion for demanding expeditions above and below water, and are entirely in their element in this natural paradise. But the massive extent of the threat posed to this World Heritage Site is also clear to us.” IWC Schaffhausen pledges itself to ecologically responsible behaviour and pursues a corporate strategy based firmly on sustainability. As a manufacturerof top-quality watches that stand for lasting value, the Swiss company feels a very special obligation to help preserve the fragile ecosystem of the Galapagos Islands. It therefore supports and sponsors the Charles Darwin Foundation and its research organization, which adopts a scientific approach to the challenges on the Galapagos. IWC brings the same commitment to the Cousteau Society, which dedicates itself to continuing the research work of Jacques Cousteau (1910–1997) and the preservation of the world’s seas. With his unique photography and film work depicting the rich diversity of marine life, the French deep-sea diver brought “The Undersea World of Jacques Cousteau”, as his most popular TV series was known, to the homes of millions of people worldwide. A passionate engineer, inventor, researcher and film-maker, he heightenedawareness of the need to protect the blue planet as no one else has done.

THE 2014 AQUATIMER COLLECTION: AN OVERVIEW

For the first time ever, a model from the IWC diver’s watch line is equipped with a perpetual calendar, a genuinely haute horlogerie complication. The Aquatimer Perpetual Calendar Digital Date-Month (Ref. IW379401) is a genuinely big watch from two points of view. On the one hand, there is the IWC-manufactured 89801 calibre with perpetual calendar and large digital display for the date and month, a feature very much in the Pallweber tradition of 1884. On the other, the flagship of the new collection – which is limited to just 50 watches, incidentally – comes with an impressive case diameter of 49 millimetres. This makes the AquatimerPerpetual Calendar Digital Date-Month the second-largest wristwatch in IWC’s history, after the Big Pilot’s Watch of 1940. Following in the footsteps of the GST Deep One of 1999 and the Aquatimer Deep Two of 2009, the AquatimerDeep Three in titanium (Ref. IW355701) is the third generation of IWC’s diver’s watches to feature a mechanical depth gauge. Both the depth gauge and the rotating bezel system have been continuously developed and improved. During a dive, the blue depth indicator moves to show current dive depth, while the red maximum depth indicator remains at the maximum depth attained, down to a maximum of 50 metres. The Aquatimer Deep Three thus provides a complete backup system to a dive computer. Built for extreme depths, the Aquatimer Automatic 2000 (Ref. IW358002), water-resistant to 200 bar, continues IWC’s tradition of manufacturing timepieces that can withstand extraordinarily high pressures for both amateur and professional divers. Its titanium case and minimalist design are reminiscent of another iconic IWC model: the Ocean 2000, created by Ferdinand A. Porsche in 1982. The Aquatimer Automatic 2000 features the rugged IWC-manufactured 80110 calibre with Pellaton winding system. With the Aquatimer Chronograph Edition “50 Years Science for Galapagos”(Ref. IW379504), limited to 500 watches, IWC honours the 50th anniversary of the Charles Darwin Research Station, a scientific institution set up by the Charles Darwin Foundation. The Aquatimer Chronograph Edition “GalapagosIslands” (Ref. IW379502), which comes with identical technology, has been an expression of IWC’s commitment to the threatened archipelago. Both watches are powered by an IWC-manufactured 89365 calibre and have an attractive black rubber coating. With the Aquatimer Chronograph Edition “Expedition Charles Darwin” (Ref. IW379503), IWC Schaffhausen traces the journey of the well-known naturalist to the Galapagos Islands.Here, Darwin collected the evidence that formed the basis of his theory on the origin of species. As a tribute to this event, and for the first time ever, IWC Schaffhausen makes use of bronze for a watch case: the metal alloy was one of the materials typically used in shipbuilding at that time. This special edition is also equipped with the IWC-manufactured 89365 calibre. 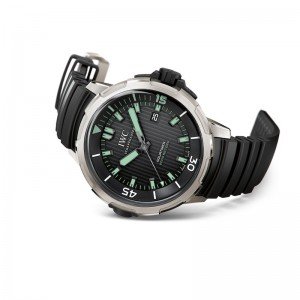 In 1971, for his film “The Dragons of Galapagos”, the best-known pioneer of marine research Jacques Cousteau undertook an expedition to the remote islands in the Pacificto study the behaviour of the marine iguanas. In honour of this enlightening journey of discovery, IWC unveils the Aquatimer Chronograph Edition “Expedition Jacques- Yves Cousteau” in stainless steel (Ref. IW376805). Thanks to the more discreet colours and shapes, the Aquatimer Chronograph in stainless steel (Refs. IW376801/IW376802/ IW376803/IW376804), with a black or silver-plated dial, also cuts a fine figure in everyday use. The purist design of the dial leans heavily on that of the first Aquatimer of 1967, but offers a more contemporary interpretation. With a case measuring 42 millimetres in diameter, the Aquatimer Automatic in stainless steel (Refs. IW329001/IW329002/ IW329003/IW329004) is the smallest member of the diver’swatch family. The watch, with its three hands, is available in four versions, with a black or silver-plated dial, complemented by a matching black rubber strap or stainless-steel bracelet.

IWC CEO Georges Kern sums up the comprehensive relaunch of the Aquatimer watches as follows: “The new Aquatimer collection has undergone a carefully orchestrated process of technical and optical development. The sophisticated external/internal rotating bezel makes the watch easier to use than ever before and guarantees even more safety during dives. The design of the sports watchesis uniquely modern and unmistakably bears the hallmark of IWC. Other features that boost the quality and value of the line are the inclusion of more IWC-manufactured calibres and, for the first time ever, the use of bronze in a case. And with complications such as a perpetual calendar with large digital date and month display as well as a mechanical depth gauge, the Aquatimer line has now taken a leading position in the world of haute horlogerie.”