The young independent brand has taken a step further in 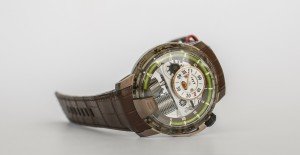 time personalization with its first customised watch, the H1 Cigar. The reasoning behind that builds on the existing combination of materials and colours which watchmakers have been using for cases and dials, and allowing the customers to personally choose an alchemy of their preference, reflecting a passion or hobby of theirs, be it cigars or sandy beaches. The epitome of “unique”, each timepiece will hold an aspect of its wearer’s identity and will find no match among other pieces. 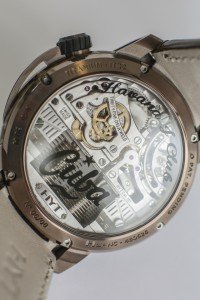 owners. HYT CEO Vincent Perriard explains: “The real challenge was to develop an alloy whose chemical structure we could alter by adding solid, foreign elements to its basic formula, without affecting either its reliability or technical properties, such as hardness, density or brilliance.” The H1 Cigar was the first watch to be personalized as such for a cigar aficionado and watch collector.

Considering the immense success Hublot’s Fuente Forbidden X watch collection racked since end of 2014, we expect the H1 Cigar to be a hit too.