Bomberg presented the BOLT-68 at 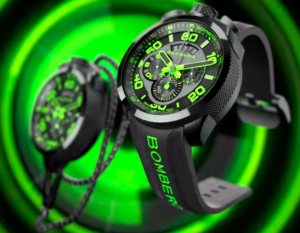 Baselworld 2014, a watch collection clearly carrying the brand’s DNA: the “68” refers to one of the most remarkable years of the 20th Century in terms of new social parameters and changes, and the “bolt” emphasizes on collection’s strength and design impact. BOLT-68 boasts a patented bayonnet system which turns the wristwatch into a masculine pocket watch. The collection immediately became a best seller, prompting the brand to develop the concept further.

Bomberg promises several new unconventional and audacious designs at Baselworld 2015; here is a teaser of some of the novelties. We are looking forward to seeing what is to come later this week!