Roger Dubuis brings a steampunk touch to the SIHH 2014

Once again, Roger Dubuis surprised SIHH visitors with a unique booth concept created for the renaissance of the “Hommage” collection: a tribute to traditional watchmaking through a modern expression, born of a rich combination of mechanical beauty and organic creativity inspired by the post-industrial era and the anachronistic, inimitably hybrid genre known as steampunk.

Our team brings you the amazing Roger Dubuis booth experience from SIHH 2014, with highlights on some of their outstanding novelties and a video interview with Associate Director of Movement Development Gregory Bruttin, who took us on a journey into the details of the new collection and especially, the Hommage.

Hommage: a tribute to Fine Watchmaking 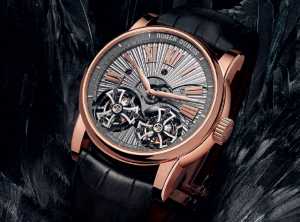 For Roger Dubuis, 2014 brings a unique focus on its reinvigorated Hommage collection representing the quintessence of its Incredible Mechanics. A collection paying eloquent tribute to horology and to the most admirable exponents of this discipline that is both art and science, as well as a magnificent field of expression for a wide range of handcrafted skills. Each of the models in this collection carries the figurative and literal signature of Mr Roger Dubuis, the enduring ‘soulmaker’ of the Manufacture that bears his name and the man who first launched the Hommage collection in 1995.

The Hommage Double Flying Tourbillon with Hand-made guilloché provides a stunning contemporary interpretation of a time-honoured decorative skill in a model driven by the innovative new RD100 movement. The Hommage Flying Tourbillon Tribute to Mr Roger Dubuis represents an intensely personal token of recognition for the ancestral skills of Fine Watchmaking that are an integral part of the founder’s legacy. The newly revived collection also encompasses a selection of Hommage Automatics giving a signature contemporary slant to traditional wristworn elegance, as well as Hommage Chronographs powered by sophisticated Manufacture Roger Dubuis movements dedicated to keeping pace with performance.

Meanwhile, ladies are offered a tantalising opportunity to marry Fine Watchmaking and spectacular gemstones in a choice of Velvet – Haute Joaillerie creations that may be personalised at will to capture their unique character and charm.

Each of these models embodies another facet of Roger Dubuis’ unswerving commitment to excellence, as vividly illustrated in its 100% Poinçon de Genève-certified production. The very same commitment that has shaped and defined its all-new booth at the SIHH 2014 that invites visitors to step inside a unique 21st century mechanical feast. CEO Jean-Marc Pontroué is proud to be reintroducing the fifth collection in such an original stage-setting that powerfully highlights the world of Incredible Mechanics at the heart of the Roger Dubuis universe. Perhaps most importantly of all, the booth pays vibrant ‘Hommage’ to traditional watchmaking through a uniquely modern expression: a living, ticking, almost ‘breathing’ proposition that captures an extraordinary ability to appropriate timeless traditional artistry. 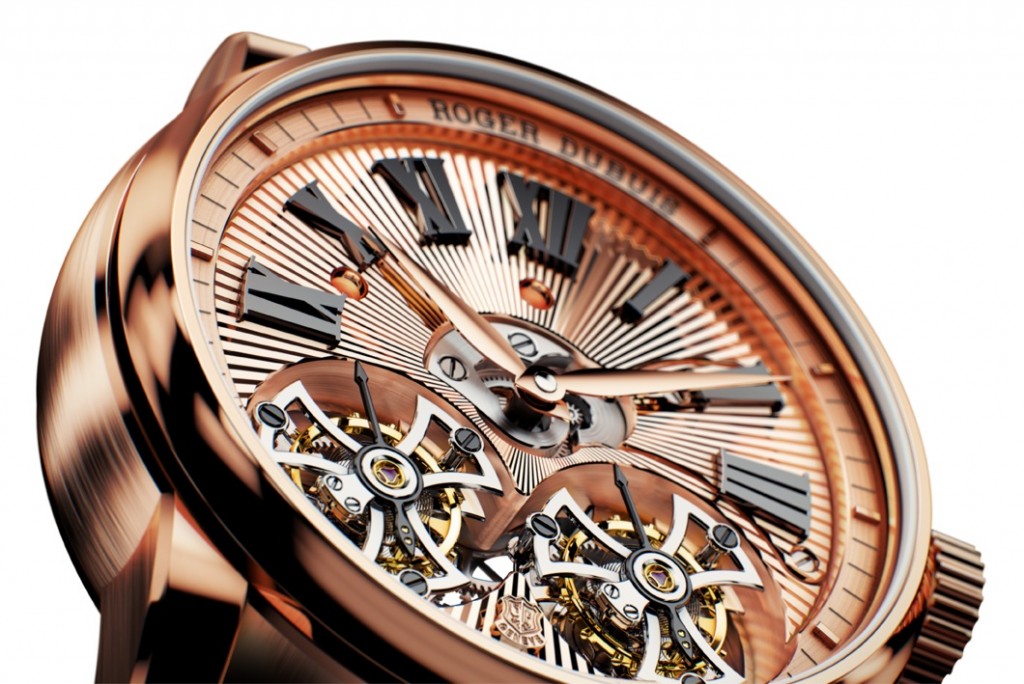 This new masterpiece of the Hommage collection highlights the traditional art of guilloché embodying an audacious combination of traditional and modern craftsmanship.

By introducing the first Hommage models in 1995, Mr Roger Dubuis was paying a glowing tribute to his forefathers in the watchmaking field as well as to horological traditions in the broadest sense of the term. When it came time to create the exceptional Hommage Double Flying Tourbillon with Hand-made guilloché, Gregory Bruttin and the R&D department that he heads opted for a deliberately simple display. Adopting a pareddown design made it possible to tailor the movement even more closely to the intrinsically traditional natureof the Hommage collection, while also providing even more space in which to offer a contemporary aesthetic interpretation.

The result of these deliberations was the RD100, a new movement composed of 452 individually hand-finished parts, endowed with a 50-hour power reserve and which called for 1,200 hours of manufacturing – of which 360 are devoted to meeting the Poinçon de Genève criteria – as well as six full weeks of controls. Such an accomplished mechanism naturally deserved to be showcased to its full advantage. The new Hommage Double Flying Tourbillon with Hand-made guilloché achieves exactly that in a spectacular new demonstration of Roger Dubuis’ equally intense concern for the inner and outer beauty of its models. Endowed with historical design codes including long slender lugs, a concave bezel, large Roman numerals, a fluted crown and a distinctive folding clasp, it also features a range of subtle new touches.

The art of guilloché 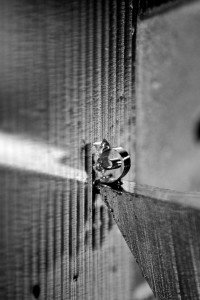 The art of guilloché, which dates back to the 16th century, consists in “decorating an object with engraved, etched and intersecting lines”. At the end of the 18h century (1786), this art was applied to decorating watch dials and cases. The brilliance of the incision in precious metals produced a peerless decorative effect and this technique enjoyed an extraordinary surge of popularity in the 19th century. In 21st century watchmaking, guilloché remains an unmistakable token of meticulous attention to detail and creates fascinating visual effects that enhance the personality of a watch.

Hand-guilloché techniques in particular convey a unique prestige, applied using age-old straight-line or rose engines turned or operated by artisans and thus in fact mere tools assisting the latter in their delicate task entirely guided by personal skill, experience and intuition. The beauty of the motifs thus created depends on the artisan’s aesthetic flair and dexterity, since the success of their endeavours is determined by a number of factors including speed, pressure and accurate positioning.

Recalling that the lines composing the patterns measure a mere hundredths of a millimetre (0.05 to 0.1 mm) deep gives a clearer idea of the hair’s breadth precision required to achieve an attractive final result. This is also precisely why the guilloché motifs hollowed out by the graver will never be identical on two given parts – a factthat in turns explains the unique and exceptional nature of each watch with a hand-guilloché dial.

A fresh interpretation of a traditional decorative motif

In the Hommage Double Flying Tourbillon with Hand-made Guilloché, the ample space provided by the new movement design sparked the creative decision to craft the décor directly on the movement mainplate – a move entirely in tune with Manufacture Roger Dubuis’ perpetual quest to push existing boundaries.

Traditional guilloché work almost invariably involves crémage (literally ‘creaming’) with wet talcum powder so as to create a ground-down finish rather than a polished effect. This serves as a means of concealing the inevitable tiny micro-scratches created by the guilloché artisan in the direction of the grooves. As Gregory Bruttin explains, in reflecting on a potentially different technique, the idea was to remain in harmony with the genetic heritage of the Manufacture. Just as the Roger Dubuis approach to openworked or skeletonised movements is characterised by taut, dynamic straight lines rather than elaborate curves, here too the team was keen to create a resolutely modern take on a traditional craft. As often seems to occur when the Roger Dubuis R&D department decides to attempt an apparently risky and daring experiment, it turned out that simply skipping the crémage step enabled the light to play over the facets of the guilloché work and thus accentuate its dramatic visual impact.

The complementary decision to add a small bridge lends a further intriguing aesthetic touch, but nonetheless entailed its own difficulties, including ensuring a smooth, flawless transition. Separately guilloché working the two parts by hand meant that any unsightly scratches on the bridge would mean discarding both elements. 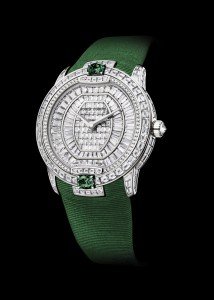 The Maison Roger Dubuis has woven intense and passionate ties with women. Women who believe that fine mechanical horology should not remain an exclusively masculine preserve, but who continue to nurture a love of precious stones and dressy, sophisticated designs. In short, women who want it all – especially when it comes to choosing a timekeeping companion to adorn their wrists. Women who are firmly in touch with the Diva side of their nature, and are unafraid to reveal and express it.

The Velvet collection is an anthem of praise to voluptuously feminine charm, an expression of discreet yet genuine luxury enhanced with a dash of daring spirit. The confident elegance of the dazzling Velvet creations vividly conveys the intrinsically passionate nature of the Diva spirit pervading the entire collection. The recurrent boldness apparent in Roger Dubuis models and indeed in its entire approach to watchmaking, is an indication of the Geneva watchmaker’s determination to remain attuned to the tastes and desires of its most demanding clients – many of whom are of course women. The Velvet collection is a brilliant demonstration of this audacity, proving that a line may be synonymous with elegance and luxury together with a delightfully subtle feeling of misbehaving typical of the Diva. Its powerful, distinctive creations draw all eyes to their exceptional charisma and bring a new energy to watchmaking. 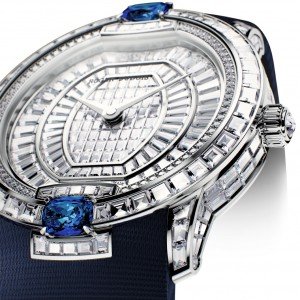 The Velvet collection owes its special aura partly to its original design. With their graphic split-level dials creating a depth effect, elongated Roman numeral appliques converging towards the centre, finely decorated lugs that allow the bracelet to flow naturally from the 36 mm case, the timepieces playfully revisit the Roger Dubuis codes with a new sophistication. The trompe l’oeil case design, midway between a circle and a “tonneau” or barrel shape, accentuates an audacious style, while countless precious touches caress the sensual curves of the collection.

Inside these infinitely seductive timepieces radiating a blend of virtuosity and poetry beats a strong mechanical heart. With its commitment to maximising reliability, Roger Dubuis has fitted this line with a latest-generation calibre, the mechanical self-winding RD821 movement – designed, developed and perfected in-house according to the purest traditions of watchmaking. Decorated with “Côtes de Genève” it comprises 172 components, runs at a frequency of 28,800 vibrations/hour (4 Hz) and has a 48-hour power reserve. Like the entire Roger Dubuis production, each watch in the Velvet collection is stamped with the prestigious Poinçon de Genève. The Velvet Collection is a true icon of glamour that brings a blend of mystery and elegance to the watchmaking scene.