The expertise and virtuosity of the Manufacture Jaeger-LeCoultre are revealed through each of its timepieces. Watchmakers, artisans, engineers and technicians, united in the same location at the heart of the Vallée de Joux, share the same vision of excellence and work together to give birth to unique horological creations.

Our team brings you the Jaeger-LeCoultre booth experience from SIHH 2014 and highlight on some of their outstanding novelties and innovations. 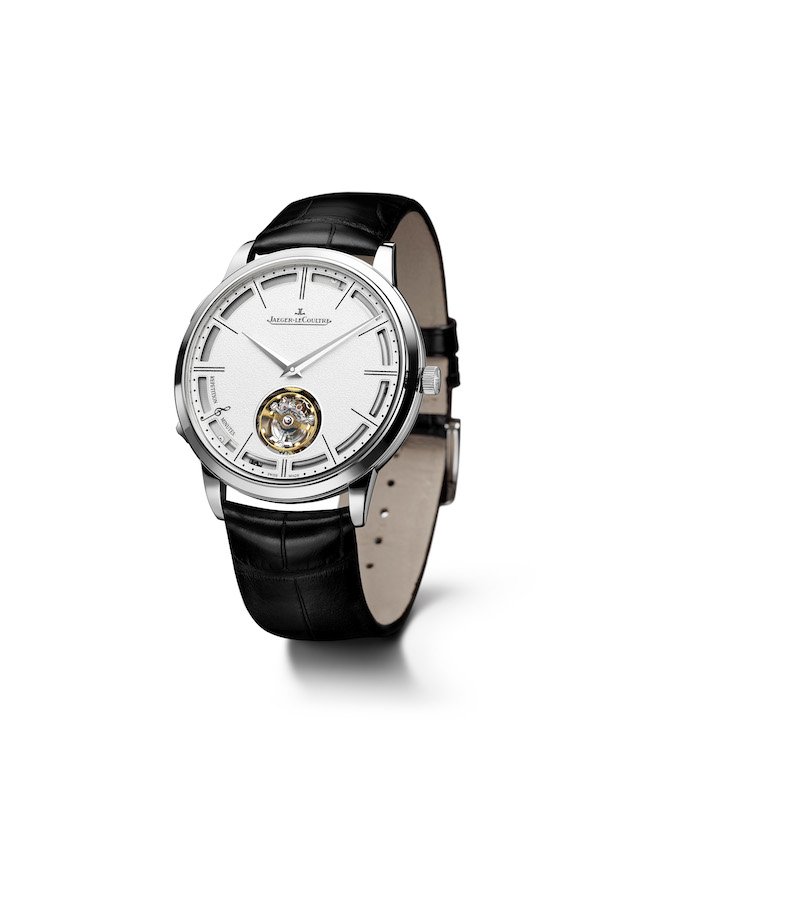 In 1907, Jaeger-LeCoultre laid the foundations of what was to prove a key element in the identity of its watches. That was the year when the association between Paris-based businessman Edmond Jaeger and Swiss watchmaker Jacques-David LeCoultre gave birth to the world’s thinnest pocket watch featuring a blend of aesthetic refinement and horological sophistication that only a Manufacture uniting the full range of skills under one roof could hope to achieve. Today, Jaeger-LeCoultre confirms its ability to anticipate the future of Fine Watchmaking by unveiling the Master Ultra Thin Minute Repeater Flying Tourbillon watch, the eleventh creation in the Hybris Mechanica collection and the first ultra-thin Grand Complication model.

Eleven, the number standing for inventions and exceeding expectations.

Think-tanks composed of insatiable visionaries and tireless developers: such is the very nature of the teams at Manufacture Jaeger-LeCoultre. It enables them, just one year after the introduction of the Master Ultra Thin Jubilee, to present an authentic pioneer in the field of Grand Complications. The newcomer bears a name revealing a set of technical feats that are bound to stimulate the imagination of Fine Watchmaking connoisseurs. And rightly so. The Master Ultra Thin Minute Repeater Flying Tourbillon stems from research on two iconic horological complications. It is indeed the slimmest minute repeater in its category at just 7.9 mm thin. 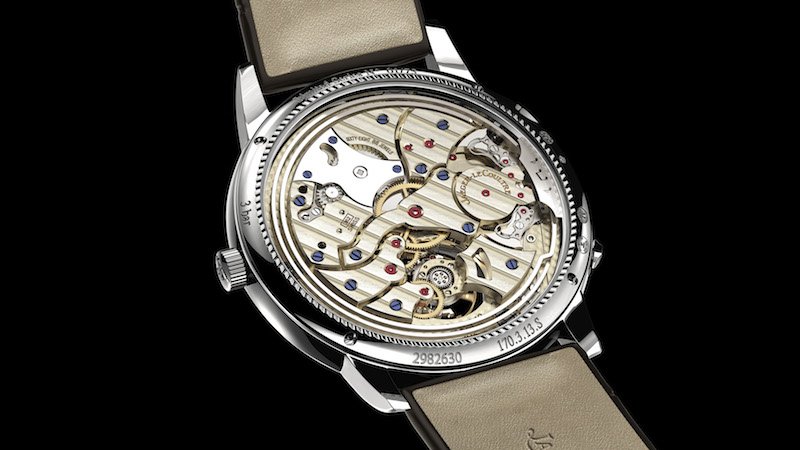 This watch capitalises on eight separate patents, six of which are entirely new. Its entire development process was governed by two watchwords – ingenuity and performance. Its quintessence lies in a successful bid to achieve extreme slenderness while making no compromises on reliability.

Hybris Mechanica 11 is equipped with an original tourbillon, a high-performance new balance-spring, a peripheral automatic winding system, a retractable single pushbutton, as well as a new minute repeater equipped with a silent-timelapse reduction system. As the latest addition to an illustrious and fertile saga of Jaeger-LeCoultre striking watches, this model consolidates the brand’s leadership in this field.

The impressive complexity of Hybris Mechanica 11 foreshadows the future presentation of the Hybris Artistica collection – of which the mission is to combine the most technical and creative skills of the artisans within a Manufacture housing 180 different forms of know-how.

Jaeger-LeCoultre is more strongly inspired than ever by the intangible heritage of the Maison: the unquenchable thirst to push existing boundaries and to create timepieces in the vanguard of innovation. Driven by such strong convictions, Hybris Mechanica 11 places Jaeger-LeCoultre firmly at the very pinnacle of ultra-thin horology and Grand Complications. 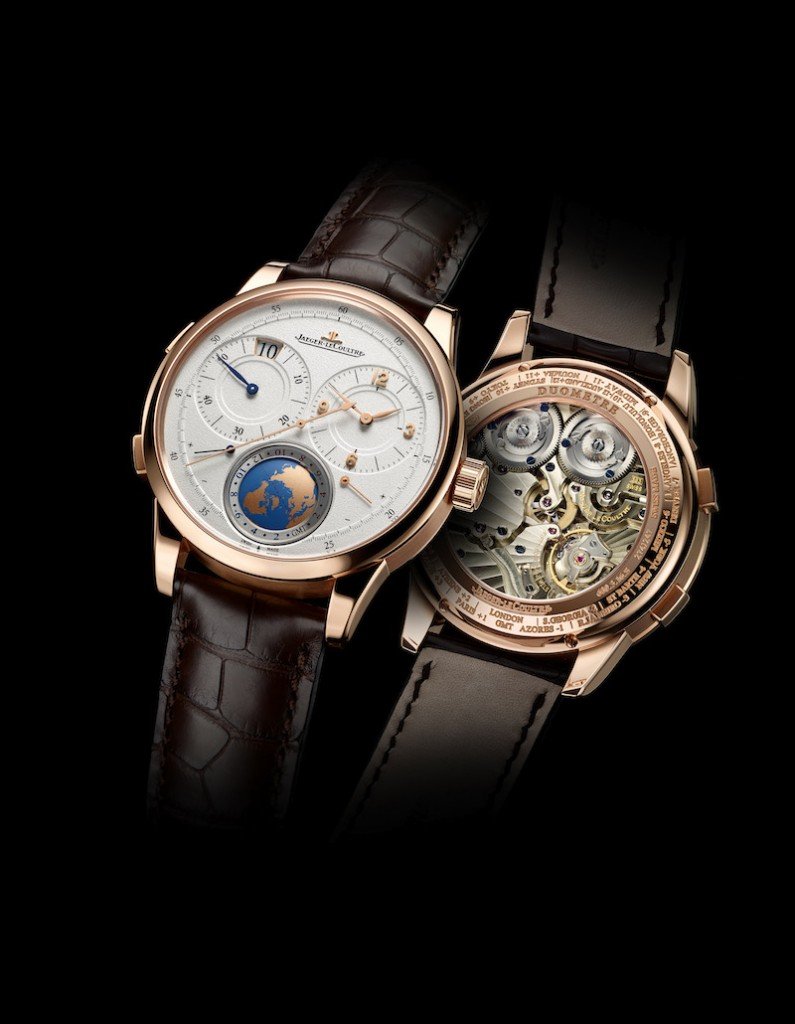 The Grande Maison in the Vallée de Joux undeniably owes its incredible destiny to the inventive spirit of its founder, Antoine LeCoultre. Since 1833, every watch bearing the Jaeger-LeCoultre signature is crafted with the same passion, guided by a constant quest for technical enhancement. Each masterpiece, heir to over 180 years of expertise, benefits from state-of-the-art research.

A fresh interpretation of the revolutionary Dual-Wing movement, the Duomètre Unique Travel Time watch in pink gold reflects the technical breakthroughs achieved by the Manufacture in the field of world-time watches and offers original solutions for travellers with a love of Fine Watchmaking.

The Duomètre Unique Travel Time is the first world-time watch enabling to-the-minute adjustment of the second time zone. This enables travellers to accurately set the second time zone on all continents and countries regardless of the time difference.

In keeping with the technical and aesthetic spirit of the creations by the Duomètre line signed Jaeger-LeCoultre, the Duomètre Unique Travel Time watch reveals the various facets of horological excellence by the Manufacture in the Vallée de Joux. It asserts itself as an absolute reference in terms of mechanical watchmaking and of the intrinsic elegance with which all creations from the Grande Maison have been imbued since 1833. Past, present and future converge in perfect harmony in this exceptional creation.

For this movement, the Dual-Wing system is divided into two distinct mechanisms: the first is devoted to displaying the local time, and the second to showing that in a second time zone. The two mechanisms share the same regulating organ but each has its own independent source of energy, thereby avoiding the losses due to interaction between the mechanisms. The operation of the dual time-zone display does not in any way influence the running of the watch, a fact that considerably enhances the precision of the watch.

Each mechanism has a 50-hour power reserve and, governed by a wish to achieve ideal user-friendliness, the same crown serves to wound both barrels. The timekeeping barrel is wound by a counter-clockwise rotation, and the travel-time barrel by a clockwise rotation.

Given the complexity of the functions, the finely grained dial provides impeccable clarity. Two magnificent symmetrically arranged subdials lend a perfectly balanced touch to this horological creation: the first subdial at 2 o’clock sets the stage for the hour and minute hand; while the second at 10 o’clock hosts the jumping hour and minutes of the travel time.

Once both time zones are synchronised, the traveller can simply use the push-pieces at 8 and 10 o’clock to adjust the jumping hours in the left subdial according to the destination. And in case of a non-standard time zone, the minutes can be adjusted separately using the crown in position 1.

Jaeger-LeCoultre Calibre 383, a remarkably beautiful and exquisitely finished movement is revealed through the sapphire crystal caseback. Its bridges and gear trains are hand-chamfered and feature polished sinks. The moving parts, also hand-chamfered or adorned with polished sinks, are graced with a snailed or smoothed finish. These decorative touches are clearly inspired by the grand tradition of the brand’s pocket-watches and lay new milestones through their exceptionally refined finishing. The engraved names of the cities corresponding to the world’s 24 time zones are also visible through the back.

A worthy heir to the Duomètre line, the pink gold Duomètre Unique Travel Time is a celebration of technical and precious Fine Watchmaking, vividly illustrating over 180 years of history while prefiguring the watchmaking of tomorrow.

The creation of this model is a dizzying feat that sets a connoisseur’s heart beating as fast as its mechanism. Inspired by its 19th century perpetual calendars, Jaeger-LeCoultre launches one of its finest complications within the Master Grande Tradition line: the Master Grande Tradition Tourbillon Cylindrique à Quantième Perpétuel in pink gold. Dedicated to collectors and devotees of the watchmaking art, its advanced technology makes it the most accurate perpetual calendar on the market/the world’s most accurate perpetual calendar.

Right from its founding, Jaeger-LeCoultre began pushing the boundaries of the watchmaking art with the advent of pocket-watches featuring elegant finishing and top-flight mechanical substance. Their vocation was to write new pages in the history of complications and in the quest for ultimate precision and reliability. Reflecting the inventive spirit of Antoine LeCoultre, these models explored uncharted territory in developing prestigious movements. The Master Grande Tradition Tourbillon Cylindrique à Quantième Perpétuel unswervingly pursues the same path with its pure aesthetic and its watchmaking heart endowed with the latest technologies developed by Jaeger-LeCoultre with a constantly renewed purpose: giving a sense of performance to watchmaking tradition.

The latest creation from the Manufacture opts for a movement which single-handedly embodies a miniature watchmaking revolution: the automatic winding mechanical movement, Jaeger-LeCoultre Calibre 985, of which the tourbillon – equipped with a cylindrical balance-spring – puts on a spectacular watchmaking performance.

The watch, equipped with a flying (or cantilevered) tourbillon and a perpetual calendar, has been created in complete respect for the noblest watchmaking traditions and is in tune with the quest for absolute precision treasured by the founder of the Manufacture Jaeger-LeCoultre. Within a large 42 mm pink gold case, Jaeger-LeCoultre Calibre 985 beats to the rhythm of a flying tourbillon and is equipped with a cylindrical balance-spring, forming an ensemble guaranteeing exceptional precision timing performances. The tourbillon is a major feat in itself. Its grade 5 titanium carriage, its large 14-carat balance and its cylindrical balance-spring developed by Jaeger-LeCoultre create an impression of levitation: the tourbillon appears to be suspended in mid-air at the heart of the movement. The perpetual calendar provides a crystal-clear display of the day, date, month and year, alongside with the moon phases; while the daring small seconds counts off precious moments above the flying tourbillon.

In the early 1930s, when polo players at last had a watch suited to the practice of their sport thanks to its brilliant reversible case, elegant gentlemen also made their move on this new invention. Always on the lookout for new trends, they were quick to discover the beauty of a timepiece originally designed to enable British colonial army officers to compete in polo matches without the risk of breaking the then vulnerable glass of their watch. Within a few years of its birth, the Reverso was already widely appreciated by a broad audience including watchmaking fans won over by the technical feat involved in the swivel case, as well as sports lovers and aesthetes.

The new model, entirely in keeping with its historical ascendance, vividly evokes the finest hours of Art Deco. Its shapes, its colour and its materials are the ultimate expression of a movement that heralded the inception of industrial design while favouring hand craftsmanship executed to perfection. Entranced by this delightful colour palette, the eye naturally lingers on the pleasing contrasts between the glowing chocolate shade of the watch face and the pink gold of the case, including the traditional gadroons framing the dial. This irresistible association is further underscored by the judicious reinterpretation of the aesthetic principles governing the original. Apart from the 12 o’clock numeral, the hours are shown by baton-shaped hour-markers, while the hour and minute hands feature a dagger-type profile. The small seconds at 6 o’clock perform a once a minute rotation on the dedicated rectangular subdial. This picture of pure, restrained refinement would not be complete without a mention of the “REVERSO” inscription exactly reproducing that appearing on the historical model. Everything might seem to have been said, and yet it is only now that the distinctive emotional ties uniting an owner and his Reverso can begin to be woven. 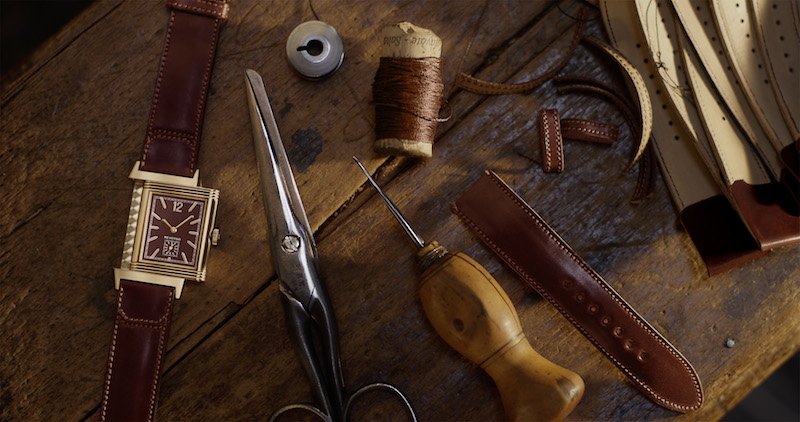 Gaining a full appreciation of the elegance radiated by this timepiece means dragging the gaze from the dial in order to admire the profile of the watch. Its close embrace of the wrist is made possible by its extremely slender 7.3 mm case which incorporates the complex parts of the swivelling mechanism as well as a movement measuring just 2.95mm thin. The resistance and reliability of Jaeger-LeCoultre Calibre 822/2 testify to the expertise cultivated within the Manufacture.