Our team brings you the Cartier booth experience from SIHH 2014 and highlight on some of their outstanding novelties. 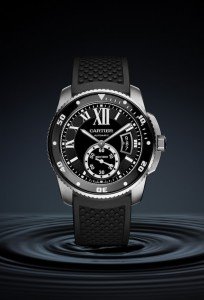 With its powerful lines, rugged case and original architecture, the Calibre de Cartier watch, launched in 2010, is the new symbol of confident masculinity. Its dial boldly reinterprets the Maison’s design codes, such as Roman numerals and a flanged bezel, that clearly identify it as a Cartier model. In 2014, this Manufacture watch opens a new chapter with a diving version: the Calibre de Cartier Diver.

An unmistakeably masculine watch for both everyday wear and extreme conditions, it meets the challenge of combining Cartier style with the technical requirements of ISO 6425. This norm, which controls the “Diver’s Watch” label, lays down eight criteria of reliability and imposes a series of extremely rigorous tests.

A unidirectional bezel, water-resistant to 300 metres, hands and dive-time indicator in superluminova: the Calibre de Cartier Diver meets all the criteria for a diver’s watch as laid down in the international standard, entitling it to carry the engraving “Diver’s watch 300 m” on the case back.

To prevent any accidental rotation or alteration of the dive-time indication, the bezel turns in one direction only. It has been designed with 120 notches (40 teeth and 3 points) to enable adjustment to a half-minute, with a clear sound signal during its rotation. For greater visibility, the markers signalling each 5 minute period are clearly indicated.

Display in the dark

The Calibre de Cartier Diver can be clearly read deep below the surface due to the superluminova applied to its dive-time indicators, hour and minute hands, pre-selection device and small seconds counter.

When underwater, diving watches can be subjected to very high pressures and extreme conditions (salt water, thermal shock, etc.). For protection, the Calibre de Cartier Diver is fitted with a thick crystal, a screw back, oversized seals and a screw-in crown that ensure water-resistance to 300 metres. The watch has demonstrated its resistance to salt water after immersion in a solution of sodium chloride (30g/l) at 18°C – 25°C for 24 hours. Furthermore, after spending 50 hours at a depth of 30 centimetres at 18°C – 25°C, it continues to function perfectly under water.

Traditional expertise at the service of Fine Watchmaking 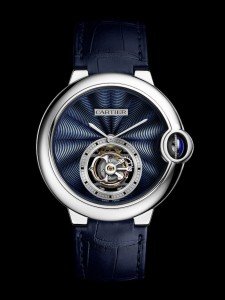 The Ballon Bleu de Cartier 39 mm Flying Tourbillon watch with a blue enamel dial, elegantly celebrates the very essence of its name by elevating the colour blue to the status of an absolute value. The omnipresent deep blue of the enamel dial affirms this timepiece’s timeless signature trait.

Its dimensions will appeal to men looking for a compact watch with a modern Tourbillon and which, in addition to its soft lines, is characterised by great comfort. 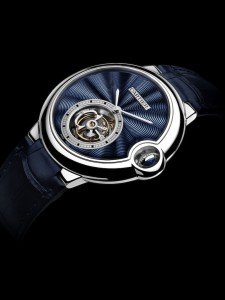 Boasting an exceptional dial in deep-blue enamel, The Ballon Bleu de Cartier 39 mm Flying Tourbillon watch with a blue enamel dial, follows in the tradition of dials and clocks crafted in enamel at the beginning of the 20th century. This craft involves first creating a radiating motif in guilloché on a disc of 18-carat white gold, which is then covered with several layers of translucent enamel.

The enamel starts out as powder, the texture, composition and colour of which must be carefully chosen to ensure an even and pleasing appearance after firing. Control of the temperature during firing affects the entire process. This phase is all the more delicate because the dial has a large opening through which the flying tourbillon carriage is visible. Once it has cooled down, the dial displays a radiant interplay of matter and luminosity, between the transparency of the layer of enamel, the texture of the guilloché and the refinement its blue hue.

The Ballon Bleu de Cartier 39 mm Flying Tourbillon watch is certified “Poinçon de Genève” Its calibre 9452 MC is assembled and adjusted in the Cartier workshops in the very heart of Geneva, according to the strictest criteria of excellence.

Strictly for watch aficionados who will see it for the rare object it is, the Ballon Bleu de Cartier 39 mm Flying Tourbillon watch with a blue enamel dial, celebrates Cartier’s unique style with elegance and creativity. 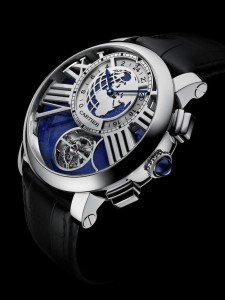 Secret moon and round the world

The Rotonde de Cartier Earth and Moon watch is the fruit of a technical and creative ambition that for Cartier consists of bringing together two complications in a daring display. Removed from its strictly horological role, in which it serves as a guarantee of precision and prestige, a tourbillon has been incorporated into a moon phase complication, with each one dependent on the other.

The watch owes its name to the stylised portrayal of the globe and the moon represented by a tourbillon. Together, they form a creative and animated world with skeletonised Roman numerals surrounding this dynamic feat of watchmaking.

An innovative blend of complications

The moon-phase mechanism of the Rotonde de Cartier Earth and Moon watch is founded on a creative and complex design that combines a tourbillon, moon phase on demand and a second time zone.

The tourbillon, or how to escape the earth’s gravity

The Tourbillon mechanism is a complex complication that falls within the expertise of a limited number of watchmakers. Its main function is to fight against the effects of gravity when the watch is in a vertical position.

Because it appears in its original form and exists only when its user wishes it to, the moon phase on the Rotonde de Cartier Earth and Moon watch reveals a technical creativity that is doubly innovative.

By pressing the push-button situated at four o’clock on the side of the case, a panels descends and partially obscures the Tourbillon carriage. The crescent thus formed reproduces exactly the moon’s shape in the sky.

a 24-hour disc that was entirely redeveloped by for the calibre 9440 MC due to the sophistication of its disc display. 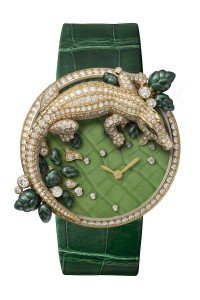 Between poetry and magic, the watches of the L’Heure Envoûtée de Cartier Collection meet and engage with one another. Each is unique, each is rare and precious… A mysterious pact unites them. Who are they?

An apparition… the reflection of one, the echo of another, complicit pairs – never twins – presented by a spell that goes beyond reality. They live their lives facing one another, one figurative, the other abstract, a duo of images, a slanting mirror, a fruitful dialogue between gemstone and animal…These creations weave ties between form and colour, design and brilliance… Diamonds, emeralds and gold create connections, proclaiming that at Cartier, poetry is a creative, living, passionate and incandescent material.

The time of metamorphosis slips between day and night… A collection of magical watches, the theatre of a waking dream, where ahead lies the chance to pass through to the enchanted worlds of Cartier. Like in a fairy tale, the majestically abstract stones come to life in the shadows and are transformed. A collection born of an encounter between two areas of Cartier expertise: the treasure of its rare stones and the vitality of its flamboyant menagerie. 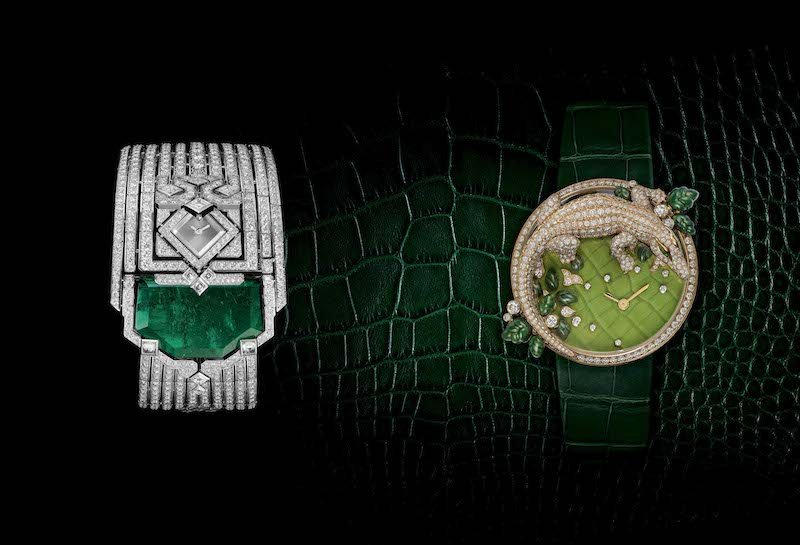 L’Heure Envoûtée de Cartier… in the depths of an emerald inhabited by gardens that multiply its brilliance. A secret watch whose Art Deco rows of diamonds become electrified, revealing a tiny dial in the centre of a series of diamond pleats…

Cartier invites us to close our eyes and experience the mystery… The vibrant, intense gemstone slowly comes to life allowing the silhouette of a crocodile, a precious reptile, to emerge at the heart of a transforming watch… Now a watch, now a brooch, this creation in free verse tells of the jeweller’s fascination for the watch’s subject. 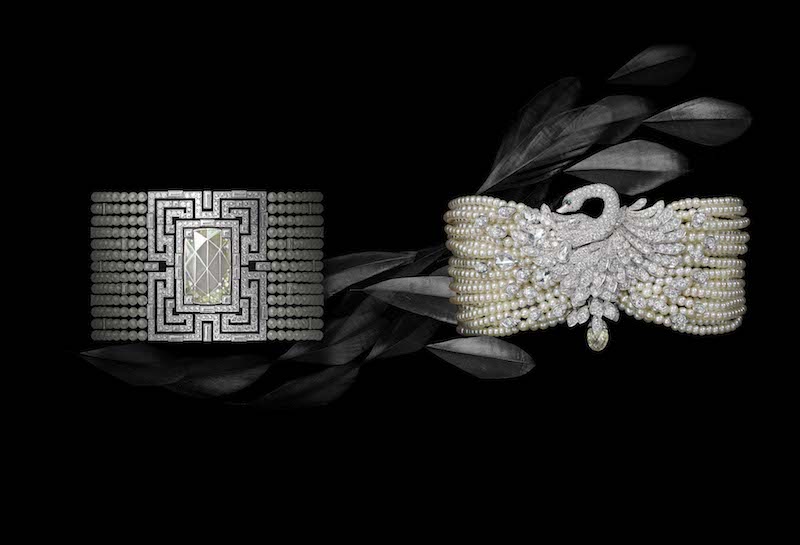 L’Heure Envoûtée de Cartier… the dazzling fires of a rose-cut diamond. The eye moves to the heart of a motif of perfect geometry, echoing the elegant purity of the Art Deco period, as sharp as the lines of a labyrinth. Like a stroke of light, the cuff bracelet in natural pearls and brilliant-cut diamonds invites us to go beyond appearances and cross worlds. The imagination breaks free and takes flight on the wings of a swan in a flurry of diamonds.

Beneath the secret gear trains of invisible mechanisms, beneath the diamond or in the bird’s plumage, the hours conceal or reveal themselves. 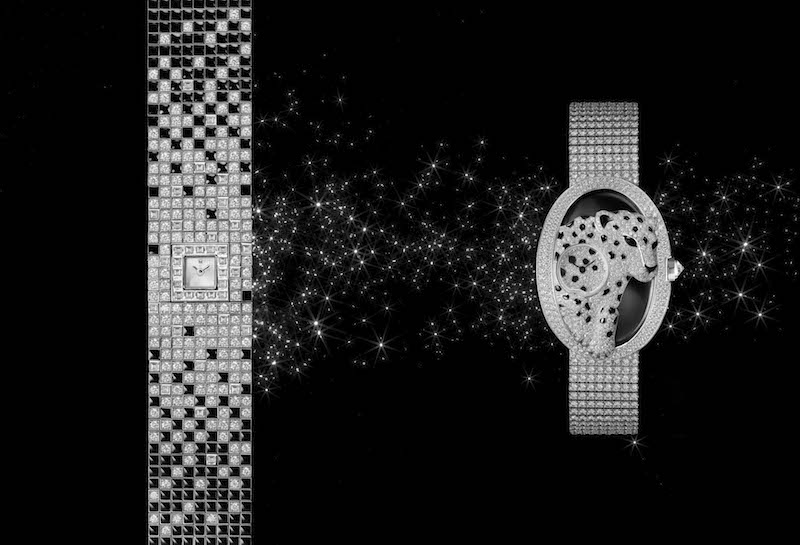 L’Heure Envoûtée de Cartier… with the hypnotic design of an abstract motif of black and white spots,an allusion to the panther’s coat on a supple cuff bracelet that coils around the wrist.

L’Heure Envoûtée de Cartier… with the enigmatic presence of the feline, suddenly slipping into the heart of a Baignoire dial…

Here and there: the panther, an essential, founding source of inspiration for Cartier, a powerful and magnetic creature, the emblem and metaphor of free femininity