Chillout Productions opened its doors to everyone on the opening night of the 12th annual music festival, which was then followed by another smashing hit the next day for Valentine’s Day. Sponsors, partners, loyal fans, and newcomers of all ages came and enjoyed the weekend filled with music, lights and laughter. With all the challenges that were faced by the organizers, it goes without saying that the success of the first weekend was a living proof for everyone that the Dubai International Jazz Festival® is an established event that can’t be beaten due to its fanbase who keeps on coming back to show their loyalty and support. As early as now, the organizers have announced the new dates for next year’s 13th Edition, the festival will run from February 19 – 27, 2015. New venue will be announced soon.

On the opening night last February 13th, Earth Wind & Fire Experience feat. The Al McKay Allstars rocked the Main Stage, amazing all their spectators when they took them back to the 70s. The five-time Grammy Award winner Al McKay and the LA Allstars have been getting parties started across the planet and it wasn’t any different on this particular night. The vibe radiating from the stage was felt throughout the event where the audience thrilled by their performance, danced and sheered in the open air, under the stars of Dubai. 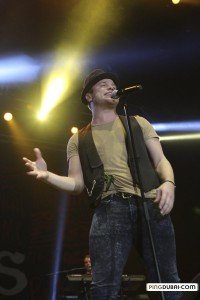 It was indeed a special Valentine’s celebration with the British boy band The Wanted who owned the night with their extremely good looks and amazing show. The crowd was astounded by the band’s skills and charms onstage; it made the fans cry their hearts out. And that wasn’t all for the night, the stage was then taken over by the British pop star Olly Murs who made the audience go crazy with his looks and killer voice. The hype from his fans didn’t make it easy for him especially with all the  troublemaker girls on the venue. Overall, the crowd was literally blown away by the fantastic performances given to them by The Wanted and Olly Murs. Even for the artists, it was a Valentine’s Day that they will never forget.

As for Jazz Garden – The Legends Edition running in parallel with the Main Gigs, Tony Lakatos, Kirk Lightsey, Al Foster and Wallace Roney delivered amazing shows that made the audience livelier and more energetic at the end of each night. Unquestionably, the second weekend will attract more crowds so people should get ready when it kicks off on the 19th of February.

A truly unforgettable experience for the concertgoers made possible by the unique and chilled atmosphere, structured system and outstanding performances of these amazing artists. It’s not over yet so we hope to see you there and join us for more incredible nights! Main Gigs 2nd Weekend will be featuring the bubbly Colbie Caillat and the fabulous Jamie Cullum who wont stop the music on the 19th, and on the last day, the Legendary Santana will perform on the 20th for the closing night.

Chillout Productions is particularly proud to present a fantastic line up of world-class artists for the *Emirates Airline Dubai Jazz Festival® 2014 with A Unique Take On Jazz, Pop & Rock all through the entire eight days. The festival will run from 13th to 20th of February 2014 at Festival Park – Dubai Festival City. Visit www.dubaijazzfest.com for more information