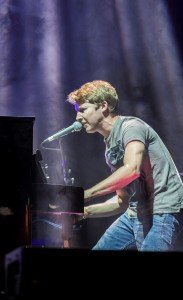 evening with a slow version of “Jar of Hearts” behind her keyboard, gently warming up the audience for the three day music fest. Dressed in a casual black and white outfit, she embarked the crowd on a moving journey with her velvety voice and remarkable talent, accompanied by various musical instruments. After an hour of fast moving, toe-tapping hits, Perri ended her performance with her latest hit “Human”, setting a lively tone to the much awaited ‘Jazz Fest’. James Blunt made his appearance on stage about 30 minutes later, singing the sad yet soulful “Face the Sun” with his unmistakable voice, stirring emotions among his fans. With his usual friendly style, high and low voice, and songs about real-life issues and situations, he never fails to appear like just another face in the crowd, which makes him easy to relate to. Spending over an hour at his favourite piano, on his chair or energetically stringing his guitar in front of a digital backdrop of visual special effects from his “Moon Landing World Tour”, he offered yet another seamless performance, creating new memories under Dubai’s starlit sky and adding to those cherished moments we have cultivated while watching him perform. 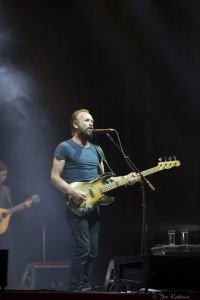 violin solo. The American “dancing violinist” (her own words) gave viewers goosebumps with her amazing performance, bouncing around the stage with her black violin and spreading a positive vibe among the crowd. Describing Dubai as “Disneyland only bigger”, she went all out for 50 minutes, surprising everyone with her never-ending energy and setting the stage on fire before the performance of a music legend. Sting‘s bearded face appearing on stage was enough to send his eager fans into a frenzy. Listening to the first song “Lose Myself To You”, the crowd did loose itself to him, completely immersed in his music. “Englishman in New York” and “Message In A Bottle” reminded us of a younger Sting, sparking nostalgia and happy memories of past years. It was definitely an unforgettable performance by a great artist, one we can never stop appreciating or enjoying live.

In the jazziest of performances, four times Grammy award winner Esperanza Spalding, another recurring face of the ‘Jazz Fest’, opened the closing night of the international music celebration with award winning Jazz melodies, delighting real fans of the genre. Diversifying her songs with celo, electric guitar and bass, she grabbed the attention of Dubai’s jazz lovers with the slow beat and rhythm of her guitar. Following that exciting performance, the sound of barrel drums echoed through the venue, prompting the widely acclaimed John Legend to the stage, back in town six years after his first visit. Legend immediately fuelled the audience with an uplifting tempo of hip hop soul, blues gospel and jazz tunes. Gracefully tapping the keyboards of his piano, he captivated the crowd with his entrancing voice. Offering the lucky audience an international first, he performed the Middle East rendition of 2014’s most popular romantic ballad “All of Me”, heard live for the first time since Sony released it last month. 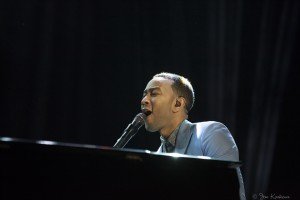 The Emirates Airline Dubai Jazz Festival has succeeded once again to launch a new year with a great musical vibe, presenting big names of the musical scene and leaving us wanting more. We can’t help but wonder which artists will grace the stage next year! Any guesses or hopes?