When A Desert Becomes The Fastest Growing City: Dubai 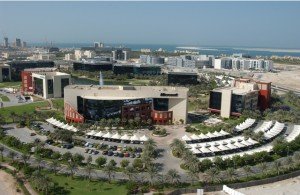 it attracts companies, investors and employment seekers from around the world for its central regional location, free and balanced economic policy, no taxes, complete infrastructures and many available services and utilities at everyone’s disposal. Two of the key zones, Dubai Internet City and Dubai Media City, have become an IT and media hub where some of the biggest international firms such as Oracle, Cisco, Microsoft and IBM, and the world’s and region’s strongest media organisations including CNN, BBC, Reuters, AP and MBC have set up main offices and studios. Jebel Ali free zone houses a port that was constructed in the 70s and that now has the largest man-made harbour in the world, ranked seventh globally for the volume of container traffic it supports.

an onshore financial centre strategically located, acting as a global financial link between the leading financial centres of Hong Kong and Tokyo in the East, and London and New York in the West. It makes for a secure and efficient platform for business and financial institutions to reach into and out of the emerging markets of the region. Unlike any other financial centre, it has its own set of civil and commercial laws and regulations under a complete code of law governed by an independent judicial system. DIFC has also been designed as a small city with a complete range of business and lifestyle facilities to enhance quality of life and accessibility: it encompasses some of the city’s top restaurants such as Zuma and La Petite Maison, and art galleries attracting famous international talents, all mainly located at The Gate Village. Retail outlets, small businesses, residential apartments and hotels -including the magnificent Ritz Carlton DIFC-  are scattered in and around the area, ensuring the needs of both residents and visitors are met.

Burj Khalifa – The world’s tallest building, a work of art, 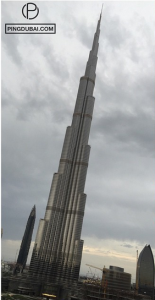 an incomparable engineering and architectural achievement. A dazzling view from the highest observation deck in the region offers a quick visual tour of the whole city. The skyscraper also includes a hotel, offices, residences, corporate suites, restaurants and a lounge. An impressive structure that can be seen from all corners of Dubai and that has surpassed all the world’s high rises, taking the lead with impeccable design and state of the art execution. The gigantic tower’s design drew inspiration from a regional desert flower, the Hymenocallis, whose harmonious structure is one of the organizing principles of the tower’s design; like petals from a stem, the tower’s wings extend from its central core. Its interior features glass, stainless steel, polished dark stones, Venetian stucco walls, silver travertine and stone flooring, and handmade rugs. The burj seems to reach the sky with breathtaking glory when it rises above the fog or clouds that occasionally swarm around the area. 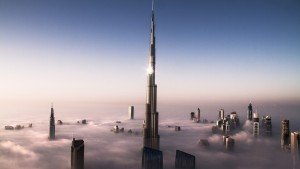 The Dubai Fountain – Another world record, the largest 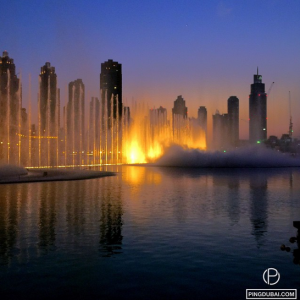 dancing fountain on the globe -even surpassing the Fountains of The Bellagio in Las Vegas-  is set on the 30 acre Burj Khalifa Lake. The 275m (900 ft) long fountain shoots water jets that reach 150m (500 ft) high, the equivalent of a 50-storey building! The fountain performs daily in sync with classical, Arabic and world music, lit up by 1.5 million lumens of projected light. The Dubai Fountain and Burj Khalifa form the background and launching point of the city’s New Year’s Eve fireworks and lights shows which have won several Guinness World Records including a 2015 record with 400,000 fireworks being set off from 400 locations around the city and culminating at Burj Khalifa and the fountain. 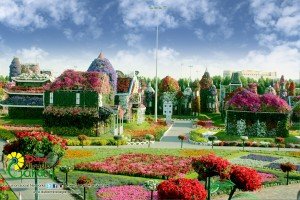 off of Al Khail road hides a magical oasis of colours and fragrances. DMG is one of the world’s biggest and most unique flower gardens, boasting prime landscaping and hardscape features, positive environmental impact through CO2 reduction and a Guinness Book Record for having the longest flower wall. The park is equipped with all related services and facilities. Fully man-made, fake you say? The only fake thing about it is someone labelling it as so. More than 45 million flowers bloom in endless colour combinations achieved through 45 different flower varieties, to form creative designs, intriguing shapes and creative structures which recreate sceneries, houses and landmarks from Dubai and the world (Eiffel Tower, Chinese pagodas).  The gardens have become a big attraction for residents and tourists alike with their magnificent florals.

These are just some of the many wonders to discover in Dubai. Yes, most of it wasn’t created by nature. Yes, man brought in new materials and played with the elements to form some of these creations. But also, a big yes to the futuristic vision that turned grains of sand into structures, buildings, mini cities and monuments, the city’s greatness. From where I stand, the only fake things here are the fake brand bags you find in hidden apartments and obscure alleys in old parts of town.