TAG Heuer and Cameron Diaz in an Empire State of Mind

TAG Heuer brand ambassador and Hollywood icon Cameron Diaz was among the entertainment, fashion and media elite who came out to celebrate TAG Heuer’s newest flagship boutique at an exclusive cocktail party hosted last night by the luxury Swiss watch brand.  The celebration began with an invitation-only gathering at the brand’s freestanding boutique – located on New York’s prestigious Fifth Avenue where key media partners had the opportunity to preview the boutiques exclusive timepiece collections and meet and greet with TAG Heuer’s Global CEO and President, Stephane Linder and Cameron Diaz. The fete continued with a cocktail reception at the esteemed Museum of Modern Art across the street from the boutique. 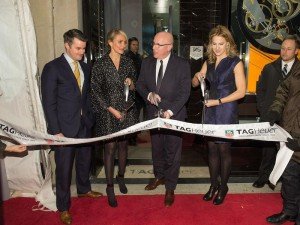 Throughout their time at the boutique, guests had the opportunity to admire an original painting of brand ambassador Steve McQueen that is prominently displayed in the library that also houses TAG Heuer’s renowned historical timepieces.  During the cocktail function, guests enjoyed scientifically engineered cocktails crafted by Minetta mixologists while contortionist dancers performed in an artful manner throughout the evening.

‘New York City is the epicenter of culture, entertainment and fashion, a perfect city to open a TAG Heuer boutique” said TAG Heuer Worldwide President and CEO, Stephane Linder during his welcoming remarks to guests.

“As one of the fashion capitals in the world and one of my favorite cities to shop in, TAG Heuer belongs in New York City” added Diaz.

With three prestige destinations in Paris and new flagships set to open in London, Milan, Madrid, San Francisco, Los Angeles, Honolulu, Macau, Singapore and Beijing, TAG Heuer is making waves in retail. Its chronographs and watches are the fastest and most precise ever made, and are some of the most sought-after items in luxury retail. Among these is the famous CARRERA, the motor-sports inspired prestige collection that has never ceased reinventing itself since its first appearance in 1963, and whose yearlong birthday celebrations have lit up capitals across Asia, North America and Europe.