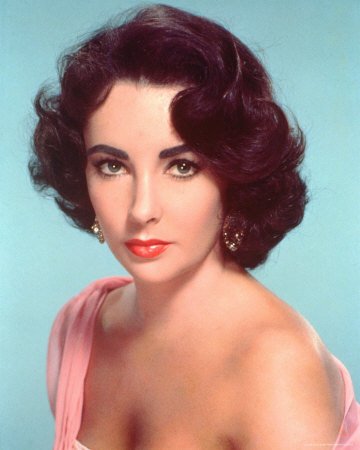 Elizabeth Taylor (1932-2011), considered the last major star to have come out of the old Hollywood studio system, died today due to congestive heart failure.  As the world mourns the loss of this silver screen beauty, I would like to recap the legend herself.

She was known for her violet eyes, her eight husbands, for her timeless roles in classics such as “Cleopatra” and “The Taming of the Shrew” among many others. She lived a glamorous and luxurious life that most could only dream of, but always with elegance and poise. She always was and always will be an example for every lady to live by. Her beauty and charm will echo through eternity.

Some trivia about Elizabeth Taylor:

Has three children and nine grandchildren.

Along with Julie Andrews, she was made a Dame by Queen Elizabeth II on New Year’s Eve, 1999.

Considered Michael Jackson among her closest friends and was godmother to his children Prince Michael and Paris Jackson.

She was voted the 11th Greatest Movie Star of all time by Entertainment Weekly.

In 2006 she introduced a line of diamond and precious stone jewelry called “House of Taylor”. The designs are said to be inspired by certain favorite pieces in her own collection. She actually wrote a book on jewelry and is considered to be an authority on the subject.

Actively sought the role of Eliza Dolittle in My Fair Lady (1964), but Audrey Hepburn was cast instead.

Her star on the Hollywood Walk of Fame is at 6336 Hollywood Blvd.

Has a street named after her in Iowa City, Iowa.

Here are what some famous people had to say about her death (courtesy of abc news abcnews.go.com):

“Elizabeth Taylor was the last of the great glamour stars. She was the longest-running soap opera in history, and represented all the allure and tragedy that attracts people to Hollywood.” — British director Michael Winner.

“Elizabeth Taylor was the last of the Hollywood greats, and a fantastically charming woman.” — Tweet from singer George Michael.

“In a career spanning more than 70 years and 50 films, her talent endured the test of time and transcended generations of moviegoers. She truly was an American icon, whose legacy went far beyond her acting skills, most notably in her efforts to lead the battle against HIV/AIDS.” — Chris Dodd, chairman and CEO of the Motion Picture Association of America.

“My mother says I didn’t open my eyes for eight days after I was born, but when I did, the first thing I saw was an engagement ring. I was hooked.” Elizabeth Taylor