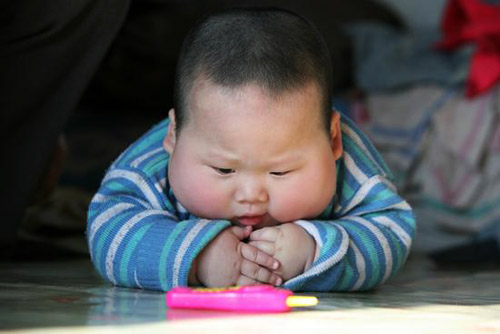 Going back to 2007 in the city of Jiangcheng in northeastern China province of Jilin, an 8 months baby shocked 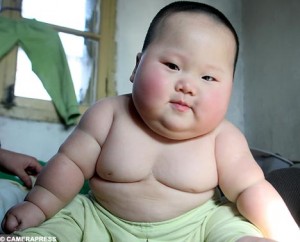 doctors with his brain that is larger than many people and he had grown from 3.3 kg at birth to an incredible 18.8 kg, twice the weight of what he should be. Pediatricians indicated that it would take 5 to 6 years for a child to reach this weight.

Both his parents and grandparents are thin in weight, so the parents were shocked at the rapid weight gain within the first month, but were hesitant to see the doctor because they could not afford paying for the costs. When the situation became unbearable, his parents decided to take him to the pediatrician because he was breastfeeding 20 times per day and refusing powered milk. Two adults were required to bathe and dress him, and after carrying him for 5 minutes his mother would have to put him down. Seeking medical help was a good decision since his weight was affecting his development. At 78 cm tall, he was unable to walk or even crawl.

Today we are reminded of this story when another obese Chinese child makes the headlines. Lu Hao is a dangerously 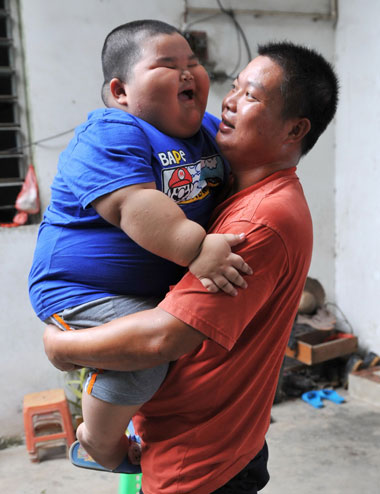 overweight three-year-old from China. At 59 kg, he is five times heavier than other boys his age. He has increased so much in size and weight that his parents are terrified of him; they are unable to stop him from devouring enormous plates of ribs and rice. According to his parent, he throws large fits of anger if he is not allowed a third or fourth serving of dinner. His mother, Chen Huan from Dashan Guangdong province explains that although she has tried cutting down his meals in the past, he still managed to add on 9.5 kg in the past year. He has also been forbidden from going to the nursery in fear that his size may endanger other children. Although he plays alone at home, moving around is becoming more difficult as he tends to run out of breath.

Bizarrely enough, Lu Hao weighed 2.5 kg when he was born but he began increasing in weight when he was three months old. His father, Lu Yuncheng explains that his son’s appetite is so big that he can eat three big bowls of rice during a meal, which is more than both him and his wife can consume. 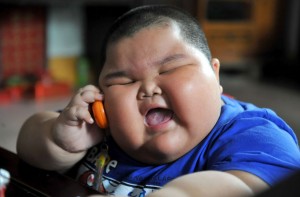 After Lu Hao’s parents took him to the Guangdong Children’s Hospital, specialists said that his weight gain could be due to a hormonal disorder.

As Dr. Lu Hong said at the time: “He is not just overweight but very tall as well, so we may be able to treat him if it really is hormonal. He cannot remain like this or his heart will never stand the strain.”

A recent government survey revealed that there are 60 million obese people in China, with numbers doubling between 1992 and 2002. 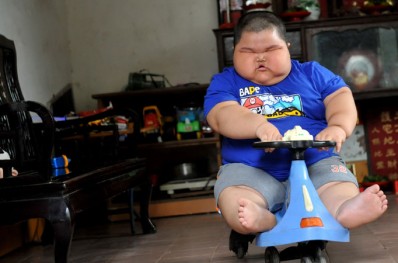