With a modest start to his Dubai career, Berdych had exited the 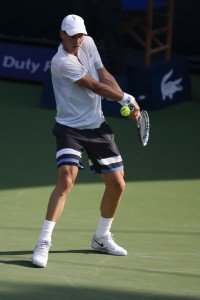 second round in 2005 facing Tommy Robredo before losing to 75th-ranked Vik in 2006. He didn’t go beyong the second round inthe next two years, with fiercer opposition. After a two year break, he returned in 2011 and reached the semis in Dubai opposite Djoko, only to retire during the third set due to a quadriceps injury. A year later, he fell to 4th-ranked Andy Murray in the quarters. However, he managed to defeat defending champion Federer in the semis, but lost to Djokovic again. Revenge was sweet for Fede in 2014 as he reclaimed his title in the final again Berdych.

Bouncing back, Berdych won titles in Rotterdam and Stockholm, reached finals in Oeiras, Beijing and Doha, and qualified for the ATP World Tour Finals in London. He claimed a stunning victory this season over Rafael Nadal, reaching the semi-finals of the Australian Open for a second year.

Berdych will definitely strive for excellence this year, facing the legendary Djokovic, Federer and Murray, along with many other finalists and rising talents who have surprised fans by defeating some of the world’s best!

Owned and organised by Dubai Duty Free, and held under the patronage of H. H. Sheikh Mohammed bin Rashid Al Maktoum, Vice-President and Prime Minister of the UAE and Ruler of Dubai, the DDFTC attracts the world’s greatest. Play begins with the WTA event between February 15-21 and features eight of the world’s top 10 and 17 of the top 20, including defending champion Venus Williams, world #1 Serena Williams, former winners Kvitova, Wozniacki and Radwanska, 2015 Brisbane finalist Ivanovic and 2015 Shenzen winner Halep. Play then continues between from the 23rd till the 28th with the action-packed ATP tournament.

Tickets are available from the Box Office at the Dubai Tennis Stadium, Garhoud (9am-9pm daily). For further information visit: www.dubaidutyfreetennischampionships.com