Lebanese singing superstar and brand ambassador par excellence for Corum since 2005, Elissa Khoury, was recently received at the Swiss luxury watch brand’s workshop at La Chaux-de-Fonds, by CEO Antonio Calce. The Arabic pop star was given a close look at the making of her favourite Miss Golden Bridge model and later posed for an exclusive photo shoot at the brand’s Geneva boutique.

The svelte and charming Elissa, typifies the grace and beauty of the masterpieces emanating from the Corum workshops. The dreamy-voiced crooner has already bagged three World Music Awards and her seven albums feature performances that resonate superb musical talent combined with the epitome of feminine grace. Elissa is also known for her crossover collaborations with international big names like Chris De Burgh, The Gypsy Kings and Tupac.

Apart from appearing as the face of the brand, Elissa is also involved in different events on the international calendar for Corum with regular appearances at events like the Doha exhibition and Jewellery Arabia in Bahrain. 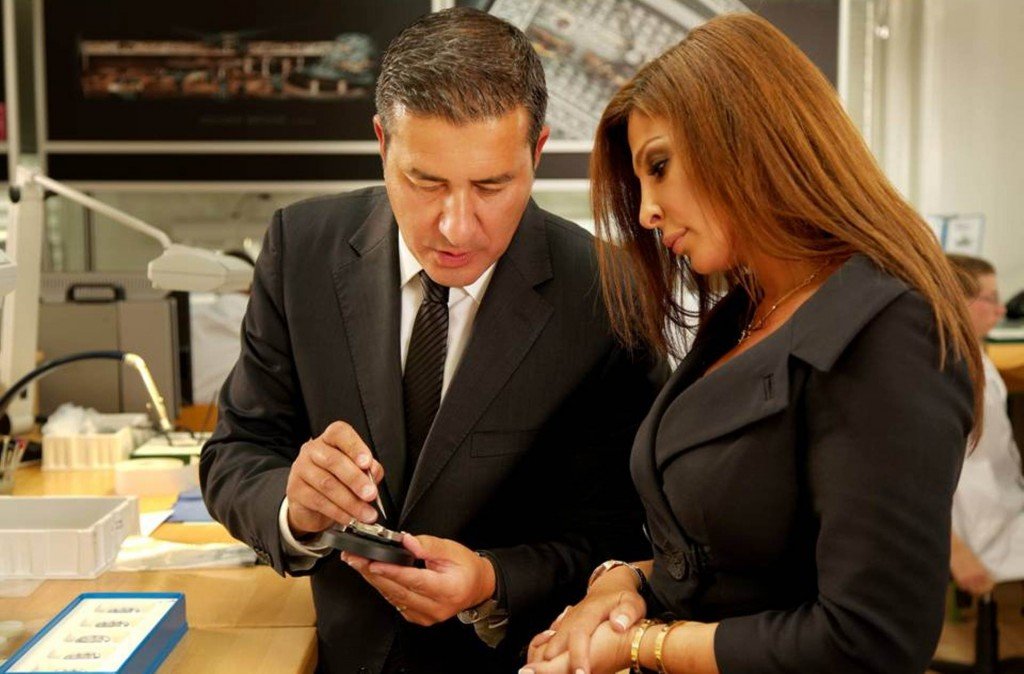 Following the visit Corum workshops, Elissa testified: “I ​​admire the patience and the thoroughness of the watchmakers. This is the first time I visited the workshops of Corum and I remained amazed by the movement of  Miss Golden Bridge. It is my preferred model, it is so romantic. I love its transparency and the development work on the unique movement; we focus on the essentials. It’s also what I looking in my profession, the lyrics are at the heart of the songs. ”

Corum’s Miss Golden Bridge watch for ladies’ is a delicate mechanical masterpiece, with an extremely elegant shape that looks as smooth as it feels. Coming in 18k red or white gold, the case is 21mm wide by 41mm tall. The four sapphire crystal windows on each side of the case provide a crystal clear view into the intricacies of the famous Golden Bridge movement. The thin and tall movement is really a testimony to horlogical excellence and is what is behind what makes the model so hard to resist. The movement bridge itself is nicely hand engraved, which contrasts well with the simple polished case. Two dark-toned skeletonized hands are placed in the middle of the movement.
For those who are looking for even greater exclusivity, the model comes in a diamond studded alternative featuring 90 gems worked into the case.