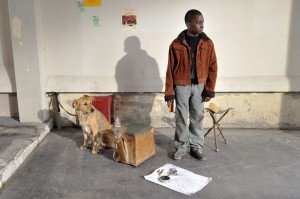 UAE audiences will be able to see the year’s best films from around the world next month, as part of the 8th Dubai International Film Festival’s ‘Cinema of the World’ showcase.

The award-winning films, selected by industry veteran and former London Film Festival director Sheila Whitaker, include features and documentaries from the United States, Mexico, Italy, Finland, France, Argentina, Spain and Turkey as well as the best from Hollywood.l

The Spanish film Las Acacias, a feature directed by Pablo Giorgelli, marks its Dubai date following its triumph at the Cannes Film Festival 2011, where it won the Camera d’Or. A heart-warming road-movie, it narrates the story of a lonely truck driver whose routine is thrown off-guard when he is forced to give a lift to a woman and her eight-month-old child in a road journey of 1,500 kilometres.

The segment also includes Le Havre, a FIPRESCI winner at Cannes and the Arri-Zeiss Award Winner at Munich Film Festival. Directed by Aki Kaurismäki, the Finland/France/Germany production is about a shoe-shiner who tries to save an immigrant child in a French port city. The film’s rich humanist sub-texts on racism and illegal immigrant issues have struck a chord around the world.

From Italy, director Alice Rohrwacher’s Corpo Celeste is the story of 13-year-old Marta, who has returned to southern Italy from Switzerland. The resettling is not easy and she is constantly tested against the boundaries of an unfamiliar city. The film was awarded the Silver Ribbon by the Italian National Syndicate of Film Journalists.

Two documentaries in the selection also explore some of the most interesting arts stories of our time from photojournalism and jazz.

Directed by Trisha Ziff and co-produced by Mexico, Spain and the US, The Mexican Suitcase charts the rediscovery of three boxes containing some 4,500 negatives of photographs taken by legendary photojournalists Robert Capa, Gerda Taro and David Seymour during the Spanish Civil War, which were misplaced in the chaos at the start of World War II.

The American The Girls in The Band directed by Judy Chaikin, is an inspiring story about female jazz musicians and big band instrumentalists from the 1930s jazz era and their journey to the present day.

From Mexico, director Juan Carlos Rulfo’s Carriere 250 Meters paints a portrait of writer Jean Claude Carriere, who famously remarks that between the house he was born the cemetery in which he will end is a life journey of just 250 metres. In unraveling the life of the writer, the documentary takes the viewers through Paris, New York and India.

Finally, the George Clooney-starrer The Descendants will also screen to DIFF audiences. The film, directed by Academy Award-winner Alexander Payne, is based on the eponymous novel by Kaui Hart Hemmings and follows a land baron in Hawaii who tries to reconnect with his daughters after his wife suffers a boating accident.

Sheila Whitaker, Director of the Festival’s International Programme, said: “It is always such a pleasure to cinematically travel the world and find films that must surely please DIFF audiences and this year has been no exception”

Masoud Amralla Al Ali, Artistic Director, Dubai International Film Festival, said: “The films in our Cinema of the World selection deliver on our promise to bring the best of world cinema to UAE audiences. Not only do they span nations, genres and subjects, many of these films are making their Middle East debuts at DIFF; others are making their international premieres – a measure of the trust that global studios have in our Festival.”

Additional titles will be added to the world cinema lineup later this week. All DIFF films will be screened at VOX Cinemas, Mall of the Emirates, or at the Madinat Jumeirah. The DIFF Box Office opens November 22, 2011.

The eighth edition of DIFF will be held in association with Dubai Studio City. Dubai Duty Free, Dubai Pearl, Emirates Airline and Madinat Jumeirah, the home of the Dubai International Film Festival, are the principal sponsors of DIFF. The Festival is supported by the Dubai Culture & Arts Authority.