“I love everything that sparkles…” Loris Azzaro 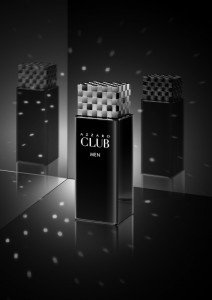 Choosing the fashion path at a time when bodies and minds were being liberated and taboos lifted, Loris Azzaro made no secret of his love of parties after nightfall. He attended them all, rubbing shoulders with the globetrotting jet set, from Parisian evenings to international premieres, not forgetting trips to Studio 54 – the era’s legendary New York nightclub – or stays on the yachts of the privileged elite. For the night showcases parties of every kind, allowing women to transform into scintillating creatures in search of glamour, ready to strike out.

This ardent admirer of unabashed female sensuality could only become the designer of the night: he would make his mark throughout the sixties and seventies by sprinkling evenings with diamanté and revolutionized fashion. To make a dazzling impact and intensify the heady party atmosphere, the designer revealed the body, boldly casting an enchanting spell with the splendor and sensuality of his dresses: fabulous flowing drapery, plunging necklines and backs, veiled see-through detailing, whirls of shimmering embroidery, improbable openings and endless slits… dresses that drive men wild for nights that never end.

To celebrate the party vibe that has made the label so successful, Azzaro fragrances launches AZZARO CLUB, the new duo of fragrances for her and him (after AZZARO NOW in 2007, AZZARO TWIN in 2009 and AZZARO DUO in 2011): AZZARO CLUB Women and AZZARO CLUB Men. Scented emotions that beat to the carefree and unrestrained rhythm of the seventies, to share between two… to light up party queens’ nights or thrill the gods of the dance floor, under the exhilarating disco ball lights. 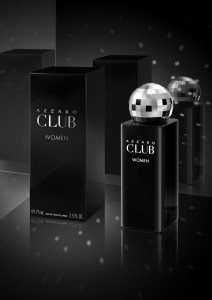 A fruity, suave and sensual fragrance with a luminous and sparkling aura, AZZARO CLUB Women is like the thousand and one flashes of light from a multi-faceted disco ball; a composition in two stages or facets, to be enjoyed until the early hours of morning:

An “Oriental Disco” creation composed by Fabrice Pellegrin for Firmenich 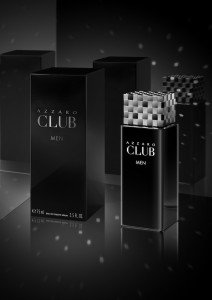 An explosive composition that is simultaneously tonic, aromatic and sensual, AZZARO CLUB Men unraveles in two stages or facets; to spray endlessly to keep up the pace all night long…

An “Aromatic Disco” composition by Antoine Lie for Givaudan.

Under the spotlights, bottles faceted by the House of Azzaro’s legacy

Revisiting the designer’s iconic codes, the two complementary bottles are in perfect symbiosis: in black-tinted glass, they are topped in shimmering silver or gunmetal grey.

It is a harmony that has illuminated the designer’s flagship Parisian store for more than forty years, based at 65 avenue du Faubourg Saint-Honoré.