Opera Gallery is showcasing the painter’s 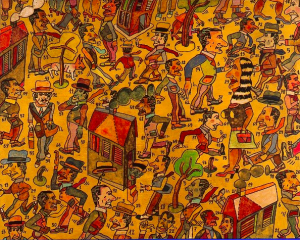 new collection from March 18 to April 1, during Art Dubai 2015, reinforcing this year’s focus on Latin America. The pieces depict Segui’s fascination with cities, urban landscapes and multiculturalism on a global level. The past three decades of Segui’s work have represented his attraction with the city, its people and its pulse, and Dubai, the “city of life”, falls perfectly within that context. Visually, Segui presents the ‘everyman’ in his work, an anonymous passerby amid the swarm and hustle and bustle of city life exploring man’s place in society and surroundings.

The paintings of the new exhibition

takes the form of a story, with Señor Gustavo, inspired by Segui’s native Argentina, as the main character, through the exploration of Buenos Aires’ first inhabitants. Some of the paintings even show Gustavo in regional settings where the characters are wearing traditional dress such as kandooras and abayas. A debate surrounds Segui’s work on the art scene: there is no consenscus on whether the artist conveys different cultures and ways of life through his paintings, or rather sheds light on the misery of existence within society.