A team of historians and architects and conservators are carefully removing parts of the thick white gypsum and cement render that was applied to the walls of the fort in the 1980s, revealing once again the original coral and sea stone masonry used in traditional Emirati construction.

This work is essential to prevent moisture from being trapped on the surface of the coral stone, which currently lies beneath the modern white render. This condensation has a corrosive and potentially harmful effect on the historic fabric of the fort.

Soon, members of the community and visitors to the UAE will be able to see this conservation work up close. The courtyard areas of the palace and former inner fort will be opened to visitors on guided tours at the annual Qasr al Hosn Festival from February 20 to March 1, 2014. Every year at the festival, visitors will be able to witness progress on Abu Dhabi’s most important historical project. The festival is held under the mandate of the Abu Dhabi Tourism & Culture Authority.

His Excellency Sheikh Sultan Bin Tahnoon Al Nahyan, Chairman of Abu Dhabi Tourism & Culture Authority, said: “The principle approach at Qasr Al Hosn is to strengthen the appreciation of Emirati heritage and identity. Qasr Al Hosn is the centre piece of a new regional cultural quarter and is being restored using international standards of conservation best practice that are recognised for the management of World Heritage assets.”

Expanding on the role of TCA Abu Dhabi, His Excellency Sheikh Sultan added, “The project will provide a different experience for every visitor, enabling each of them to have their own personal relationship with Qasr Al Hosn and to gain an understanding of the values and identity of Emirati heritage.”

Mark Powell Kyffin, Head of Architecture, TCA Abu Dhabi has been leading the project since its inception and is intimately familiar with the architectural history of the Qasr al Hosn site.

“The layers of modern render that were added in the 1980s are suffocating the traditional construction of the historic walls,” said Mr Kyffin.

“Air conditioning, which was also introduced into the building in the 1980s, can cool the building to 24c. The combination of this internal cooling and the high ambient external temperatures causes condensation to be trapped within the walls of the building on the surface of the coral stone.” 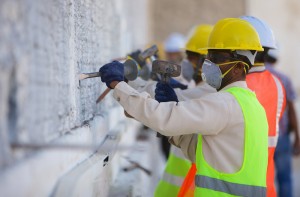 Qasr al Hosn began life in the 18thcentury as a coral and seastone watchtower built by the Bani Yas tribes on Abu Dhabi to command coastal trade routes and to protect the settlement that had grown around the water sources they discovered on the island.

Successive generations of the ruling Al Nahyan family added walls, towers, decorative entrances and residential quarters to create their ancestral home, transforming it first into an imposing fort, then into an iconic palace.

Peter Sheehan, Head of Historic Buildings, TCA Abu Dhabi has been working on the project from the outset, when he carried out the initial archaeological investigations aimed at understanding the construction sequence of the fort and informing the current conservation works.

“It’s a methodical process and we’re working as carefully as we possibly can,” he said. “Our job is to ensure that this building is conserved to the highest possible standards, so that both present and future generations can appreciate the evolution of the fort and its historical and cultural significance.

At each stage of expansion throughout the 18thand 19thcenturies, builders used coral and sea stone gathered from the ocean bed and local reefs. These stones were set in place using mortar made from ground coral and crushed sea shells. Under the conservation project this traditional form of stonework is once again being exposed to view.

One of the most ingenious aspects of the structure is its traditional ‘Barjeel’ ventilation system – effectively an ancient form of air conditioning.

Recessed arches built into the exterior walls would direct the prevailing sea breezes into the interior rooms via a network of narrow airways. A key part of the conservation and restoration works is to demonstrate the system to visitors so that they can appreciate this intelligent form of local construction. 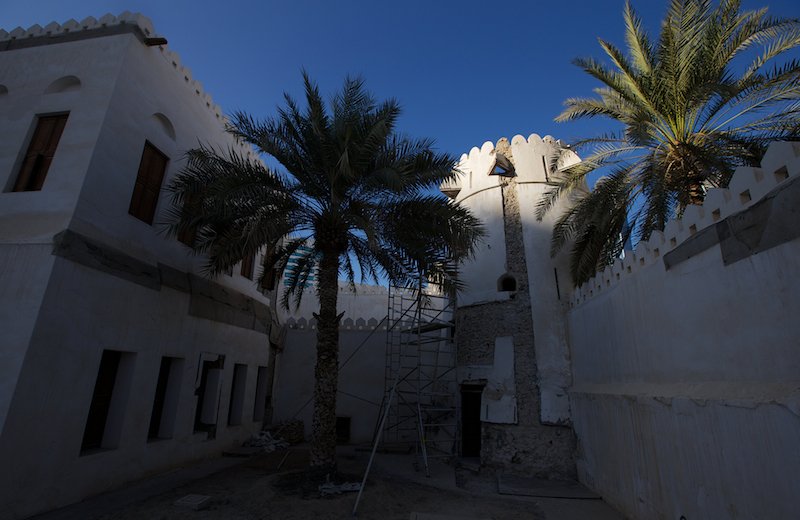 The age of the fort and its importance to Abu Dhabi’s history means the conservation team has to take every care to avoid any damage to the authentic fabric of the original structure. This is especially true for the restoration of the early watchtower, which Mr Sheehan describes as the biggest challenge for the architects and conservators due to the survival of so much of its original stonework.

UAE residents and visitors to the country will be able to witness the conservation teams carrying out their delicate work during the Qasr al Hosn Festival, a 10-day programme that celebrates the iconic building and many centuries of tangible and intangible Emirati culture and tradition.