January, while everyone is back from the holidays and working hard but quietly to stick to their New Year resolutions, the watch industry starts the year with a bang, with the Salon International de la Haute (SIHH)  in its 24th edition in Geneva, where big announcements are made, novelties presented, mega booths filled up, million of dollars traded in private rooms, and culinary and entertainment experiences offered every single evening during the duration of the fair.

We at PING couldn’t but be in the middle of the action; a full week in Geneva to bring you the best of the best.

To share with you this journey of discovery by  launching a series of special coverages, we start with one of the most intriguing brands: Officine Panerai, with its marine inspired booth, the chronograph novelties and the Galileo Galilei’s PENDULUM -a genuine collector’s item and one of the pieces I would love to have in my office some day.

Enjoy it by watching the special video as we take you into the world of Panerai, where our cameras stop time and take you back to the halls of Palexpo in Geneva.

A simple gesture to stop time and another simple gesture to go back and start it again. The essence of the chronograph realises an ancient, beguiling dream of humankind and this, perhaps, can explain the ubiquity and success of this complication even more so than its many applications and sophisticated functions.

It is in sport that the chronograph has found its ideal field of application. Sport is the kingdom of performance, of comparison and measurement, and in the history of many sporting disciplines a modest difference of a few thousandths of a second has transformed an athlete into a legend. The history of sport tells of moments made glorious by men and women whose excellence has succeeded in the challenge of making time stand still. It tells of intervals of time lived with a commitment and a passion which has turned some athletes into heroes. Excellence, passion, heroism: values which Officine Panerai has recognised and implemented for more than 150 years.

The first chronograph made by Officine Panerai dates back to 1943, the year in which the prototype of the Mare Nostrum was presented to deck officers of the Italian Navy. This long experience lives on today in the wide range of Panerai chronographs, all with designs inspired by the models created in the thirties and forties and enhanced by technical content of high quality watchmaking, developed by the manufacture in Neuchâtel in a variety of calibres enabling enthusiasts to choose the functions best suited to stopping time in their own way: Chronograph, Chrono Flyback, Chrono Regatta Countdown, Chrono Monopulsante, Chrono Rattrapante. The 2014 collection includes new and exclusive chronographs which enhance Officine Panerai’s range in this chosen area of high quality sports watchmaking.

In the new chronographs the Radiomir 1940 case, 45 mm in diameter, has the simple, elegant lines developed by Panerai in about 1940, the time when the classic cushion case with the wire loop strap attachments of the first Radiomir started to acquire the more massive proportions of the Luminor 1950 case. Every detail of the 1940 case has a polished finish, including the two push-buttons controlling the chronograph functions, the cylindrical winding crown and the bezel. This bezel frames a crystal made of Plexiglas®, a material similar to that used in the original models created by Panerai for the Royal Italian Navy, which had a polymethyl methacrylate crystal.

The dial of the new Radiomir 1940 Chronograph is a new and original design, inspired by the history of the brand but also by the function of the watch, and it has some subtle variations depending on to the metal of the case. The red gold version has a brown dial with the combination 6 of graphic hour markers, Roman and Arabic numerals that has acquired the name California, adopted by the Radiomir of 1936. The platinum version has the ivory dial, with simple baton or dot hour markers, and the same design distinguishes the black dial of the white gold version. The latter has a dial with the sandwich structure, formed of two superimposed plates with the luminous material between them, visible through holes corresponding to the hour markers. Common to all three versions is the tachymeter scale for calculating average speed and the two chronograph counters.

The movement of the new Radiomir 1940 Chronograph is the OP XXV calibre, developed on a Minerva 13-22 base. The Minerva manufacture has had historic links with Panerai since the 1920s, when the Swiss manufacturer was a supplier to the Florentine watchmaker. The OP XXV calibre is a hand-wound chronograph with a diameter of 123/4 lignes. Its construction is extremely sophisticated, with high quality details such as the column wheel, the swan-neck regulator, the polishing and chamfering of the individual components, and the Côtes de Genève finish of the bridges. The high level of craftsmanship can be appreciated through the large sapphire crystal porthole in the back, which allows the movement to be admired.

The new Radiomir 1940 Chronograph are produced in a unique edition limited to 100 examples for each of the gold versions and 50 examples for the platinum version. They are supplied with an alligator strap and are water-resistant to a depth of 50 metres. 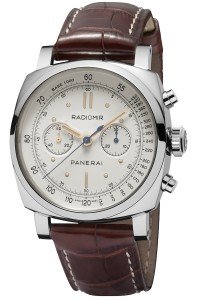 Dial: Ivory with luminous dots and hour markers. Minute counter at 3 o’clock, seconds at 9 o’clock, central chronograph hand. Tachymeter scale on the edge of the dial. 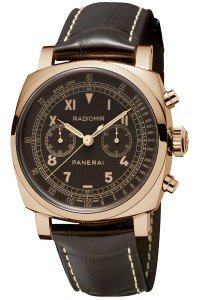 Dial: Brown with luminous Arabic and Roman numerals and hour markers. Minute counter at 3 o’clock, seconds at 9 o’clock, central chronograph hand. Tachymeter scale on the edge of the dial. 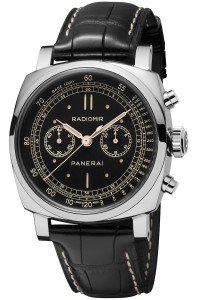 Dial: Black with luminous dots and hour markers. Minute counter at 3 o’clock, seconds at 9 o’clock, central chronograph hand. Tachymeter scale on the edge of the dial. 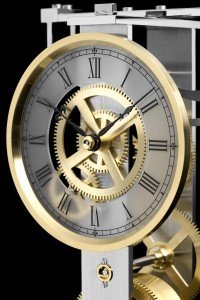 The pendulum of Galileo Galilei, the “measurer of time” which marked a turning point in horology because it opened the doors of the modern era, now beats again thanks to Officine Panerai and its new Pendulum Clock. This is a faithful reproduction of the instrument designed by Galileo to demonstrate that the law of isochronism of small oscillations of the pendulum – the period of oscillation of pendulums of equal length is constant regardless of the amplitude of oscillation – could be applied to the measurement of time. Galileo’s discovery in the 17th century represented a real revolution, because it enabled clocks to progress from an error of several minutes per day to one of just a few seconds. The escape wheel designed by the Tuscan scientist is recognised as the first free escapement in history and the Pendulum Clock therefore represents an operation of exceptional historic importance and technical mastery, underlining once again the link between Galileo, Florence, Science and Officine Panerai.

The application of the pendulum to timekeeping is a long and painful story: Galileo could not develop his intuition of 1641 since he was by then almost blind, so its realisation was entrusted to his son Vincenzo. Galileo died in the following year and the project lay dormant for a long time until, in 1649, his son decided to complete it. A blacksmith made the iron frame and the wheels and pinions in their crude state while Vincenzo Galilei himself cut the teeth of the escapement. Unfortunately he too died a few months later and the model, still incomplete but probably operational, remained in oblivion for some time. 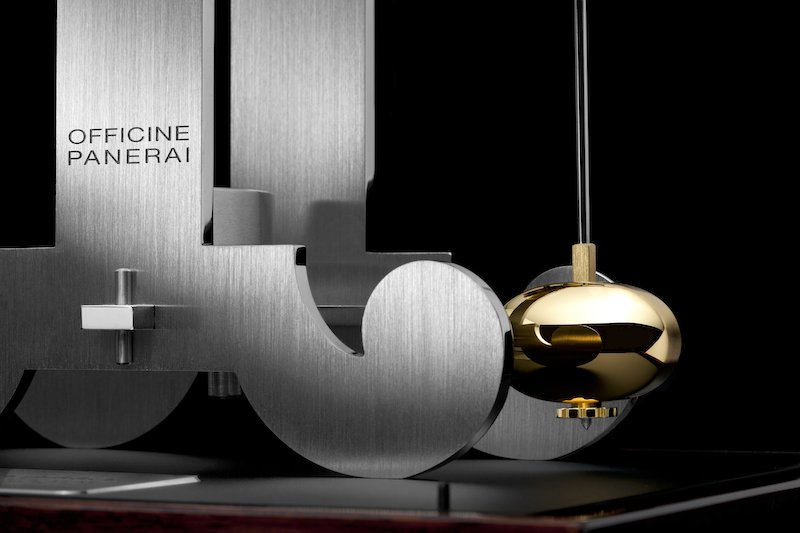 It was in 1659 that Vincenzo Viviani, friend and biographer of Galileo, recovered the model at the request of Leopoldo de’ Medici and brought it to the Florentine prince together with a drawing. And it is only the latter which survives, because all trace of the machine itself has been lost: the drawing now preserved in Florence illustrates the structure and the principle of operation of this instrument which gave physical form to the intuition which Galileo had had years earlier and to the formulation of the laws of isochronism. 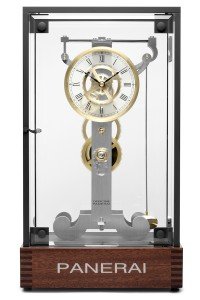 The Pendulum Clock is based on the model made by the Florentine clockmaker Eustachio Porcellotti in 1887 from this original drawing, a model which is now preserved in the Museo Galileo in Florence. The winding system and the dial are not shown in the drawing. Galileo believed that isochronism had resolved all the defects of clocks: this was the fundamental point of his discovery, and he was therefore not concerned with what type of motive power should be used or with the design of the dial. For him these were secondary details, which, however, may have been hinted at in the model shown to Prince Leopoldo de’ Medici because a writing by Vincenzo Viviani mentions a “clock of iron, unfinished, with pendulum, Galileo’s first invention”. Porcellotti added both a barrel with the mainspring and a dial with Roman numerals to his model, thus completing the instrument by indicating hours and minutes.

The remarkable new Officine Panerai production interprets Porcellotti’s work almost exactly. The height of the Pendulum Clock is 35.6 cm, the width 18.5 cm and the depth 11.1 cm: the dimensions of this table clock are taken from the original drawing and they are confirmed by the few other reliable reconstructions. The frame consists of two main plates, which are made not of iron, as in the original model and Porcellotti’s, but of brass, plated with nickel-palladium, and they are joined by crosspieces at the top and the bottom fixed in the traditional way by taper pins. The upper crosspiece carries the escapement and the pendulum suspension, while the lower one connects the lower parts of the frame plates which are formed into four scrolled feet. Between the base and the dial is the spring barrel, the drum of which contains a spring 4.10 metres long which powers the clock for eight days. The clock is wound by turning the square winding arbor with a key, while a ratchet with its related spring is mounted above the centre of the spring barrel to prevent it unwinding. Higher up is the dial with Roman numerals, like that of the 1887 model, with black-lacquered hands. The wheels with their hand-finished teeth, the bezel surrounding the dial, the spring barrel and other details are all gold plated.

The fundamental part of the clock is the regulating pendulum and escapement designed by Galileo. This consists of an escape wheel with 12 pins fitted to its side and 12 teeth cut in its perimeter, and three levers, one on the left as you look at the clock and two on the right. The one on the left, the longest lever which ends with a hook, is the stopping lever; the two on the right, arranged like scissors, are the release and impulse levers. While the wheel is in its stopped phase, the pendulum is completely free from any contact with it, and for this reason the device is called a “free escapement”. The pendulum itself consists of a rod terminating with a gold plated ovoid lenticular bob, with the screw for adjusting the period of oscillation below it. On the lower crosspiece is a place for keeping the key for winding the clock.

The Pendulum Clock is mounted on a mahogany base, with a hinged plate on the front on which the name of the model is engraved; underneath the plate is a bubble level, indispensable since the clock must be perfectly horizontal to run accurately. The base is levelled by turning the four adjustable feet of the wooden base. Completing the Pendulum Clock is a glass case, with a black-lacquered aluminium frame and a door at the front enabling the clock to be wound and its hands to be set.

The Panerai Pendulum Clock is made in 30 numbered units, sold only in the Officine Panerai boutiques around the world.