The Davidoff Art Initiative unveiled today the first Davidoff Limited Art Edition cigar boxes, featuring original commissioned artwork by the critically acclaimed Caribbean artist Quisqueya Henríquez. Two limited edition cigar boxes, each one manufactured in a quantity of 3,000 and stocked with custom-made cigars developed exclusively for the limited art edition, will be presented at Davidoff’s Lounge in the Collectors Lounge at the Art Basel show in Hong Kong.

Quisqueya Henríquez was, in addition, invited to create a highly limited run of fifty Collectors Editions, which include the special edition box of cigars as well as an original artist’s print from the series of images developed for the project. Each artwork is unique and can be selected by the customer at the time of purchase.

The compositions created by Henríquez for the Davidoff Limited Art Edition and the Collectors Editions call to mind the intricate handcraft of cigar making and evoke the multiple phases involved in the tradition of cigar manufacture. The richly colored images obtained from the layering of multiple photographs of tobacco leaves, create a composition that, while abstract, hints at the source materials involved in its creation.

“I have always had in mind to work with images that illustrate time and the many different steps involved in the tradition of cigar making,” said Quisqueya Henríquez, who was born in Cuba and now resides in the Dominican Republic. The finely layered images, inspired by the artist’s multiple visits to tobacco fields in the Dominican Republic, both capture the time-consuming process of cigar making and references the artist’s native Caribbean culture. One of the most persistent images throughout her prints is the image of the tobacco leaf, especially the complexity of its natural design. Quisqueya Henríquez also used the Rorschach technique to create a visual field of depth and establish an interactive relationship with the cigar and her pattern designs. Each work in the edition is composed of three or more superimposed photographic impressions of tobacco leaves. Each layer has a slightly different hue, and each allows for a degree of transparency. Although color manipulation is quite prevalent in some works, the natural color and texture of the tobacco leaf can still be apprehended in the abstract compositions.

The final pattern is based on the use of metallic colors inspired by the cigar’s relationship with luxury and beauty. Each design includes its corresponding cigar band and glassine. 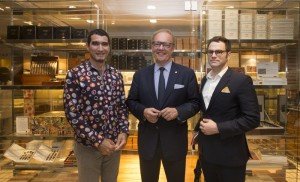 “When we approached Ms. Henríquez to do a work for our inaugural edition, we did not ask her to take up the subject oftobacco or cigars directly. So it was all the more gratifying that she asked to visit our tobacco fields in Santiago and spend time there observing our crops and the work methods of our cigar rollers,” said Hans-Kristian Hoejsgaard, Chief Executive Officer Oettinger Davidoff AG.“ The works that have resulted from her experiments with photography and the manipulation of tobacco leaves are breathtakingly beautiful, and they also say something profound about the history and culture of the Caribbean.”

Quisqueya Henríquez was born in 1966 in Havana, Cuba and now lives in the Dominican Republic and New York City. She works across collage, print, video, installation, and sound, and challenges conventional thinking about race, ethnicity, and gender, encountered in Caribbean and Latin cultures and practiced universally. Her work focuses on stereotypes originating in corporeal notions of beauty and athleticism, perpetuated by contemporary ideals of cognitive ability, economic achievement, political power, and art history. Henríquez’s work has been included in numerous solo and international group exhibitions throughout Latin America, Europe and the United States. Her work is also included in many private and public collections such as El Museo del Barrio, New York; Museum of Contemporary Art, Miami, FL; Miami Art Museum; Cintas Foundation, NY; Rhode Island School of Design; and Colección Patricia Phelps de Cisneros, NY, among others.

The Davidoff Limited Art Edition Cigar (5 15/16 inches; 54 RG) has a generous ring gauge, true to its name and underlining the interaction between craftsmanship and creativity. The innovative tobacco creation, in the popular Perfecto format, gleams in a Yamasá wrapper, which gives it a unique color, an oily appearance and intense aromas. The complex flavor of the “Davidoff Limited Art Edition” cigar begins with an enjoyable sweetness and develops a smooth creaminess. This is followed by hints of peppery notes and floral nuances. A slightly higher percentage of Piloto tobacco gives it a bolder, fuller aroma and accentuates this refined and intense blend. The second ring of the cigar created by the artist wraps around the Yamasá wrapper and is the special trademark of this exceptional series. During the entire smoking time the cigar keeps delivering growing excitement and balance.