The show was accompanied by a strong public program, including the Asian debut of Art Basel’s popular Film sector – a three-day program of 49 films by 41 artists, represented by 31 galleries participating in the fair. Screened at the agnès b. CINEMA at the Hong Kong Arts Centre, the program was curated by Li Zhenhua, the Beijing- and Zurich-based curator, multi-media artist and producer. Highlights included works by international artists such as Sookoon Ang, Takashi Ishida, John Latham, Dinh Q. Lê, Roman Signer, Nina Yuen and Hong Kong artists, Kwan Sheung Chi and Christopher Doyle. 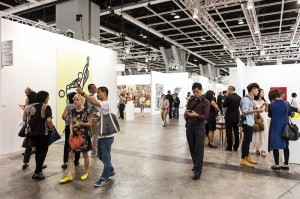 The public opening of the show was marked with a special audio-visual installation ‘α (alpha) pulse’ by the internationally renowned German artist Carsten Nicolai. Commissioned by Art Basel, the artwork generated light patterns pulsating across the entire façade of Hong Kong’s iconic 490-meter high International Commerce Centre (ICC), the 7th-highest building in the world. Like a lighthouse, the tower sent its pulses into the city, visible to hundreds of thousands of Hong Kong residents and visitors, while an accompanying mobile phone application allowed audiences across the city to participate in one of the largest artworks to be presented in Hong Kong.

Throughout the city, Hong Kong‘s galleries and cultural organizations hosted over 150 cultural events to coincide with Art Basel, including the openings of two new internationally prominent galleries in the Entertainment Building – Pace Gallery and Axel Vervoordt.

“We sold over 50 percent of our works at the booth on the first day. As always, we continue our relationships with our existing collectors and build new networks at the show. We met lots of new collectors from Asia, Europe and the United States. Art Basel in Hong Kong is the best fair we have been to so far.” Shelly Wu, Director, Tina Keng Gallery (Beijing, Taipei)

“We have had a very good week at Art Basel in Hong Kong. We have made significant sales, a majority of which have been to Asian museums, very significant European private collectors and some public foundations. This was our first participation and the response at the fair really exceeded our expectations. We have met new collectors and have begun some exciting conversations with them.” Prateek Raja, Director, Experimenter (Kolkata) 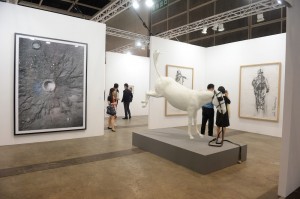 “It is always exciting to be in Hong Kong and the energy at this year’s fair was remarkable. We greatly enjoyed meeting with collectors and museum curators from the region, and had a very positive response to the gallery’s program, with particular interest in painters Yayoi Kusama, Oscar Murillo, Marlene Dumas, Luc Tuymans, Neo Rauch, and Michaël Borremans, and of course the work of Jeff Koons and Donald Judd. Notable connections included collectors from Taipei, Australia, Beijing, Hong Kong, Korea, Singapore, and New Zealand.” David Zwirner, Owner, David Zwirner Gallery (New York, London) 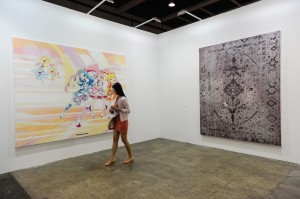 “We are thrilled with the results of the second edition of Art Basel in Hong Kong. There were many more collectors from the region in attendance this year, reflecting nearly every country across Asia, and the quality of the fairgoing experience continues to improve.” Nick Simunovic, Director, Gagosian Gallery (New York, Hong Kong, Paris, London, Rome, Geneva, Beverly Hills)

“Art Basel in Hong Kong continues to provide a platform for us to meet genuinely new clients. You can’t say that about every fair we do. The fair has remained true to its vast region too, it hasn’t become homogenised, so it is a place for us to learn about Asian artists as well as meet new international clients from all over.” Sadie Coles, Owner/Director, Sadie Coles HQ (London)

“I always view Art Basel in Hong Kong as the art show for the whole of Asia. If you’d like to go to a single Asian art show, this is the one to visit. We meet new people at the show every year and our presence also helps us form better relationships with our existing clients.” Lv Jing Jing, Manager, Beijing Commune (Beijing)