It’s been six months since the renowned fashion designer Roberto Cavalli appeared in Dubai! Pragma announced that he is coming back last Monday to spend another big night with Dubai’s finest clubbers. 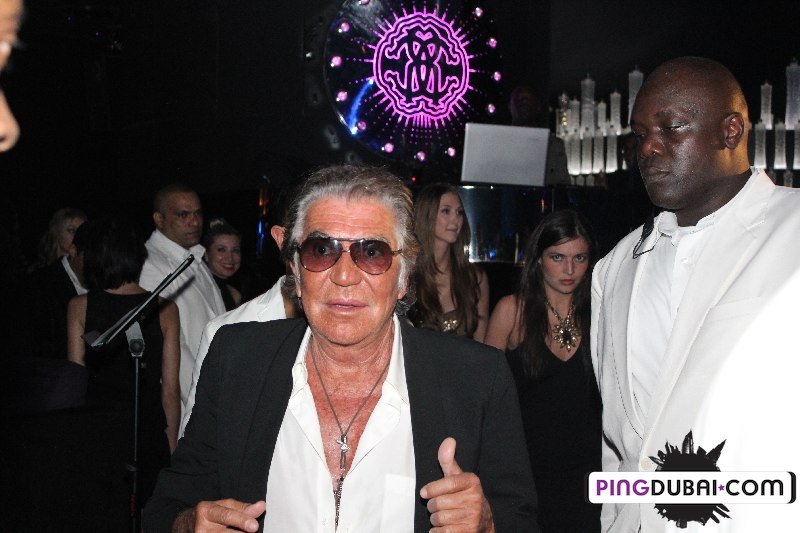 There is no better way to welcome Mr. Cavalli himself other than the red carpet with Pragma and Cavalli Club logos all over the wall, and welcome drinks served to everyone by hostesses.

The night was full of entertainment and the venue was full house. A live singer was performing during dinner from 9 to 11 pm, then at 11 pm Roberto Cavalli arrived in a limousine; the media grabbed him for some photos, video rushes, and interviews, so it took him around 30 minutes to get in. When he walked into the club, people were amazed by his down to earth character as he shook hands with some people and continued to his table with his friends and guests.

With the Cavalli resident DJ on the decks playing some nice music, everybody enjoyed their dinner and drinks. A special stage was built for the first show which featured light jugglers that spelled “Cavalli” while in motion. After Cavalli took the microphone and thanked everybody in the club, he promised to return in October to celebrate the Halloween party in Dubai with them. He ended his speech by saying “Dubai I love you!” in his Italian-English accent.

After Augustus and his four ladies presented a Moulin Rouge style show, the night continued with more entertaining shows till 3:00 am.

For those who were there, it was an up close and personal night with one of the world’s best designers. For those who missed it, enjoy our selection of photos and the video, or simply try not to miss out on the Cavalli Club anymore since the night before, Michel Adam (FTV owner) was present, followed by Roberto Cavalli, and who knows who could be next.