A one-on-one encounter with Dutch Anthony De Haas, Head of Product Development at A. Lange & Söhne, allowed us to take a closer look at the  Richard Lange Perpetual Calendar “Terraluna” and understand why the brand decided to place the moon-phase on the back of the watch. The hands placements, 14 days power reserve and the disc designs caused momentary obstacles during the design phase, but the end product turned out to be an amazing timepiece with -exactly- a perpetual calendar. On the back of this watch that exists in pink gold and white gold, are the moon and earth constellations. Quite a way of bringing different universes together! And for our hardcore watch lovers and aficionados here is a detailed story regarding this special time piece. Regulator with orbital moon-phase display and 14-day movement 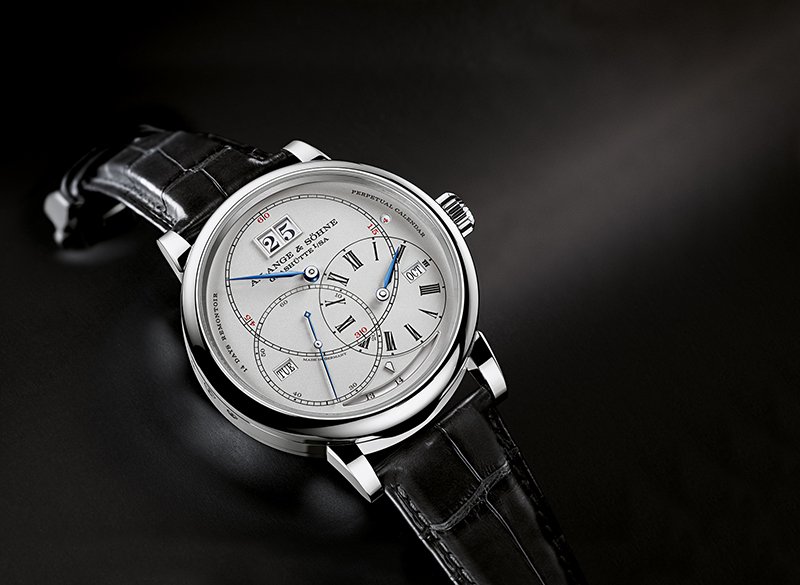 The RICHARD LANGE PERPETUAL CALENDAR “Terraluna” is a horological masterpiece that combines A. Lange & Söhne’s benchmark precision, inventiveness, and design competence. Featuring an orbital moon-phase display, a perpetual calendar with the Lange outsize date, a power-reserve of 14 days, and a constant-force escape-ment, this extraordinary time-keeping instrument represents the pinnacle of Saxon watchmaking artistry.

The RICHARD LANGE PERPETUAL CALENDAR “Terraluna” is equally impressive on both sides. On the dial side of the 45.5-millimetre pink- or white-gold case, the watch stands out with the regulator layout of scientific precision watches. The movement side presents an innovative and useful orbital moon-phase display that depicts the constellation of the earth, moon, and sun. The circles of the time indication and the perpetual calendar apertures characterise the design of the RICHARD LANGE PERPETUAL CALENDAR “Terraluna”. Three circles for time  The large minute circle is at the top of the dial of the RICHARD LANGE PERPETUAL CALENDAR “Terraluna”. The smaller dials for the hours and seconds are beneath it, shifted toward the right and left. As was already the case with the RICHARD LANGE TOURBILLON “Pour le Mérite” presented in 2011, this dial design was inspired by a great historic role model: Johann Heinrich Seyffert’s 1807 regulator from the world-famous timepiece collection of the Mathematics and Physics Salon. With his ingenious designs, Seyffert helped transform Dresden into a hub of precision horology in the early 19th century. A great advantage in precision pocket watches, the regulator format was appreciated not only by time-keeping services and observatories, but also by watchmaking manufactories where it was used for synchronising new timepieces. This is because it provided an accurate display of the minutes and seconds. Four windows for eternity 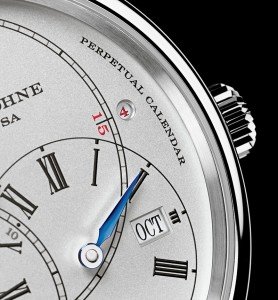 Beneath the characteristic Lange outsize date – the first one in a model of the RICHARD LANGE watch family, incident-ally – two smaller apertures show the day of the week on the left and the month on the right. Thanks to this arrangement, the calendar displays can be easily read at a glance. The calendar is mechanically programmed to correctly display the different durations of the months in a year as well as those in leap years until 2100. The leap-year indication is located in a small round window on the right-hand side of the 15 of the minute circle. All displays of the calendar switch for-ward instantaneously to assure unam-biguous readings at all times. To keep the power for the switching process as low as possible, the required energy is gradually built up via a cam and then released abruptly at midnight. The moon on its orbit  A one-on-one encounter with Dutch Anthony De Haas, Head of Product Development at A. Lange & Söhne, allowed us to take a closer look at the  Richard Lange Perpetual Calendar “Terraluna” and understand why the brand decided to place the moon-phase on the back of the watch. The hands placements, 14 days power reserve and the disc designs caused momentary obstacles during the design phase, but the end product turned out to be an amazing timepiece with -exactly- a perpetual calendar. On the back of this watch that exists in pink gold and white gold, are the moon and earth constellations. Quite a way of bringing different universes together! An exciting technical innovation can be seen on the movement side: there, the patent-pending orbital moon-phase display shows the location of the moon relative to the earth and the sun – for the first time ever in a wristwatch. The display consists of three discs. On the star-studded celestial disc, the moon – visible through a round aperture – orbits around the earth anti-clockwise once a month. The mechanism reproduces the synodic month of 29 days, 12 hours, 44 minutes, and 3 seconds so precisely that it takes 1058 years before the display needs to be corrected by one day. Beneath it, the lunar disc rotates, featuring two round new moons. The progression of the moon phases can be observed through the aperture in the celestial disc. In the constellation view, the position of the sun is occupied by the balance. On new-moon days, the dark moon stands between the earth and the sun. It appears as a bright sphere on the opposite side of the earth on full-moon days. Thus, the position and phase of the moon are indicated simultaneously. In the centre of the display, the earth rotates about its own axis once a day. It is daytime on the half that faces the sun, or the balance, and night-time on the other. The peripheral 24-hour scale provides a time-of-day reference for the northern hemisphere. The moon orbits the earth in the anti-clockwise direction. Left to right: new moon, waxing moon, full moon, waning moon. The ambitious precision goals of Lange’s product developers come to the fore not only in the configuration of the moon-phase display mechanism, which consists of three solid white-gold discs, but also in its design. To achieve a vivid and aesthetically sophisticated image of the orbiting moon-phase display, they chose a special coating process. On the celestial disc, for example, interference effects absorb all of the non-blue colour spectra of the incident light. The result is a deep-blue surface studded with more than a thousand high-contrast, sharply contoured stars. Constant force for two weeks  With two rugged mainsprings, the twin barrel delivers a power reserve of 14 days. When a spring barrel stores so much energy, special technical precautions must be taken to keep the rate of the watch stable during the entire power-reserve period. The torque of the fully wound spring would be too high to be delivered directly to the going train. And as its torque declines when it approaches the unwound state, the accuracy of the watch would deteriorate. An elaborate constant-force escapement compensates for both phe-nomena. In ten-second intervals, it releases an identical portion of the available energy to the balance, thus assuring that the torque remains constant. The result is an unvarying amplitude and high rate accuracy from the first day to the last. At the 6-o’clock position, a power-reserve indicator in the form of a circumferential ring tells the owner when the time has come to replenish the movement with fresh energy via the winding crown.

Lange manufacture calibre L096.1. The orbital moon-phase display on the movement side depicts the constellation of the earth, moon, and sun.

The pursuit of supreme precision  Since 2003, Lange has been part of the small community of watch manufactories that master the technology needed to produce balance springs. Only thus can the utmost precision be assured. For this reason, in addition to the balance spring, the remontoir spring of the constant-force escapement is also made in-house for the new L096.1 manufacture calibre of the RICHARD LANGE PERPETUAL CALENDAR “Terraluna”. The indexless oscillator beats with a frequency of 21,600 semi-oscillations per hour. Further Lange-style quality hallmarks include the hand-engraved balance cock and a lavishly hand-decorated movement. They are impressive manifestations of the manufactory’s quest for precision down to the very smallest detail.

Operating Elements: Crown for winding the watch and setting the time; push piece for advancing all calendar displays; recessed push pieces for separate correction of month, day of week, and moon phase

Crystal and Back: Sapphire crystal (hardness 9)