In the first two episodes from our one-on-0ne with President  Thierry Stern we covered 2014 novelties and 175 years celebrations, in this third and final episode we get up close and personal to the life of the passionate man behind this iconic brand, his philosophy, what he does in his free time and message to watch lovers and patekaholics around the world. Watch the full video to hear it all in his own words.

Since 175 years without interruption, Patek Philippe has been perpetuating the tradition of Genevan watchmaking. As the last family-owned independent watch manufacturer in Geneva, it enjoys total creative freedom to entirely design, produce and assemble what experts agree to be the finest timepieces in the world – following the vision of its founders Antoine Norbert de Patek (1839) and Adrien Philippe (1845). Thanks to its exceptional know-how, Patek Philippe maintains a tradition of innovation hailed by an impressive repertoire of more than 80 patents.

Independence, tradition, innovation, quality and craftsmanship, rarity, value, aesthetics, service, emotion, and legacy are the ten fundamental values of the Genevan watchmaker. Patek Philippe has always aimed for perfection by creating timepieces of unrivalled quality and reliability, the uniqueness and exclusiveness of which makes them rare and precious pieces, a unique legacy to be handed down from one generation to the next. To achieve this, the company invests in innovation with new materials and leading-edge technologies, while continuing to preserve the tradition of ancestral watchmaking know-how, and maintains the industry’s strictest quality control standards.

In the hands of the Stern family since 1932, the company is managed today by a board of directors composed of Honorary President Philippe Stern, President Thierry Stern, and CEO Claude Peny. During his years as President, Philippe Stern marked the history of the company with significant building projects to reinforce its industrial infrastructure and independence, with the creation of the Patek Philippe Museum, and with the launch of exceptional timepieces such as the Calibre 89. Appointed President in 2009, Thierry Stern aims to ensure that Patek Philippe remains at the leading edge of watchmaking technology and research into material sciences, thus contributing to the continual improvement of the long-term quality and reliability of its timepieces.

In 2009, Patek Philippe launched its proprietary quality label for mechanical watches. This Patek Philippe Seal attests to the utmost quality of its timepieces, far above and beyond official standards, by integrating all competencies and features of relevance in manufacturing, precision and lifelong maintenance. The Patek Philippe Seal applies to the entire watch and is the only seal of quality that assures lifetime maintenance of the watch, regardless of the date of completion. It is governed by detailed regulations and an independent supervisory body. The Patek Philippe Seal embodies all the company’s values and quality standards, and Messrs. Stern act as its main guardians.

Philippe Stern’s legendary passion for exceptional timepieces allowed him to gather in Geneva an extraordinary and unique collection of nearly 2000 watches, musical automata, and miniature enamels from the 16th century to today, alongside an extensive library of over 8000 works entirely dedicated to horology. This unique museum was opened to the public in Geneva in November 2001. 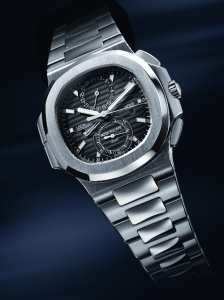 Nautilus More than 35 years of success for this famous water-resistant porthole-style case launched in 1976.

Aquanaut Created in 1997, this is a casually elegant sports watch of modern design.

Ellipse d’Or This elliptical design launched in 1968 is based on the antique Golden Section or divine proportion.

Gondolo Since 1993, these rectangular or tonneau-shaped watches have been inspired by the Art Deco era. 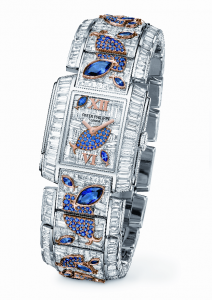 Calibre 89: Most complicated portable timepiece in the world (33 complications and 1728 parts), created in 1989 to celebrate the manufacture’s 150th anniversary. This true watchmaking masterpiece took nine years to develop and produce.

Sky Moon Tourbillon: Presented in 2001, it is the most complicated wristwatch in the current Patek Philippe collection. The double-face timepiece is endowed with the rarest complications (12 complications and 686 parts). Among other indications, it displays mean solar time and has a perpetual retrograde calendar on the front side. Sidereal time and astronomical functions are shown on the case back side. 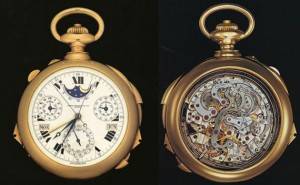 CHF 2.22 million 2013 “The Magpie’s Treasure Nest” table clock (1992) with the sculpture of a bird’s nest in which a magpie hides its booty. Hand-crafted one-of-a-kind piece in yellow gold and silver with agate, diamond, ruby, sapphire, tanzanite, rose quartz, amethyst, mother of pearl, and rock crystal. Record price for a Patek Philippe table clock.