The McLaren 650S, unveiled at the 84th International Geneva Motor Show. The McLaren 650S Spider is a no compromise open-top high performance sports car offering the same performance, handling and driver enjoyment, with the addition of a two-piece retractable hard top. The latest model is shown in Tarocco Orange, a new addition to the McLaren colour collection, developed with technology partner AkzoNobel. 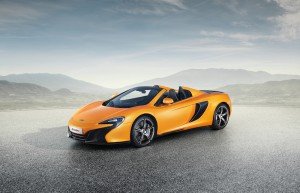 Most competitors do not offer high performance iterations as convertibles due to the compromises that invariably plague open-roof cars. These models will be heavier and have substantially less torsional rigidity, to the detriment of handling and ride.

The carbon fibre MonoCell chassis at the heart of the McLaren 650S requires no additional strengthening or reinforcing in open-top guise, and gives the 650S Spider identical handling and ride, and virtually identical straight-line performance figures. The overall weight of the 650S Spider is 1,370 kg (dry), an increase of only 40 kg over the Coupé, with this additional mass coming from the Retractable Hard Top and roof mechanism, and is less than any other car in its class.

The two-piece Retractable Hard Top can be automatically raised or lower in less than 17 seconds, and can be activated while stationary or at any speed up to 30km/h (19mph). 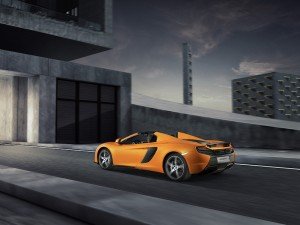 As with the 12C Spider, the 650S Spider uses a heated glass rear window, operating independently of the roof. With the roof down, the rear window acts as a wind deflector, reducing cabin buffeting. Roof up, the rear screen can be lowered to allow more engine noise – and driving drama – into the cabin, and for a semi-open top driving experience even when it is raining. When down, the roof is stowed beneath a body-coloured hard tonneau cover incorporated in the twin rear buttresses. With the roof raised, the area beneath the tonneau cover can be used as additional luggage space.

Rather than being a stripped out road racer, the 650S Coupé and 650 Spider models are fitted with a high level of luxury equipment as standard. Carbon ceramic brakes sit behind unique ‘650’ lightweight alloy wheels shod with Pirelli P Zero™ Corsa tyres, IRIS satellite navigation with Bluetooth telephony, DAB digital radio in Europe (SIRIUS satellite radio in North America), wireless tethering, audio streaming and voice control are all fitted as standard, and the cabin is fully trimmed in Alcantara.