MusicMachine 2 is powered by two independent movements mounted on the tail section. Each movement has its own winding key (disguised as a propulsion thruster), mainspring barrel, horizontal cylinder (looking like a nacelle tube) with pins, and comb with hand-tuned teeth sounding each note. The cylinders play three melodies each. An air regulator in the form of a circular fan (resembling a radar) governs the unwinding speed of the cylinder.

If MusicMachine 2 looks out of this world, then just wait until you hear it. One of the biggest challenges was in amplifying the sound. In traditional music boxes, the movement is placed in contact with a walnut wood casing that helps to augment the volume. But MusicMachine 2 is anything but traditional. Its sound-emitting case – a shallowly domed aluminium shell forming the main hull – is ostensibly separate from the movement mounted on the tail section. The diagonal tail boom is the only discernible link between the two. So how is sound energy on MM2 beamed from A to B? Thanks to an ingenious solution developed by Jeanmichel Capt of JMC Lutherie, that’s how. 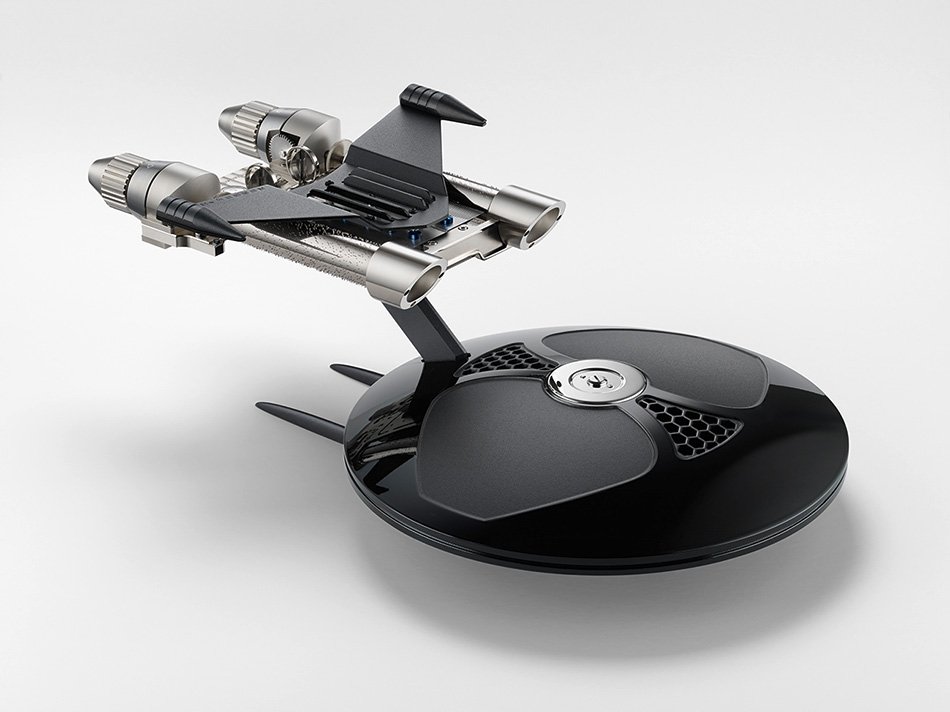 A stringed instrument maker by trade, Capt has developed a highly scientific approach to the luthier’s craft to produce devices harnessing the acoustic properties of 350-year-old spruce wood. Only one in 10,000 spruce trees have the exceptional acoustic properties required. Selected trees are cut down in November when sap flow is minimal and the timber is then dried for five to ten years.

Through the Nomex® honeycomb runs a rigid carbon-fibre bar connecting to the ship’s tailboom, which is fixed to the mainplate. The melodious vibrations generated by the two movements are conducted down the tail boom, along the carbon bar, through the Nomex® honeycomb and across the surface of the 350-year-old spruce membranes. Capt even engineered the movements’ mainplate to isolate the combs to minimise sound energy loss and maximise volume. The result is a clear, loud, pure sound, supremely rich in timbre.

Following on from the first MusicMachine, launched in 2013 and featuring a streamlined space shuttle design, MM2 is the second instalment in what will be a memorable trilogy of MusicMachines. REUGE CEO Kurt Kupper says: “Star Wars, Star Trek, Alien… Sci-fi classics have spectacular sequels and MusicMachines are no different. MusicMachine 2 is a veritable blockbuster. After seeing it, after hearing it, you are unlikely to forget it very quickly 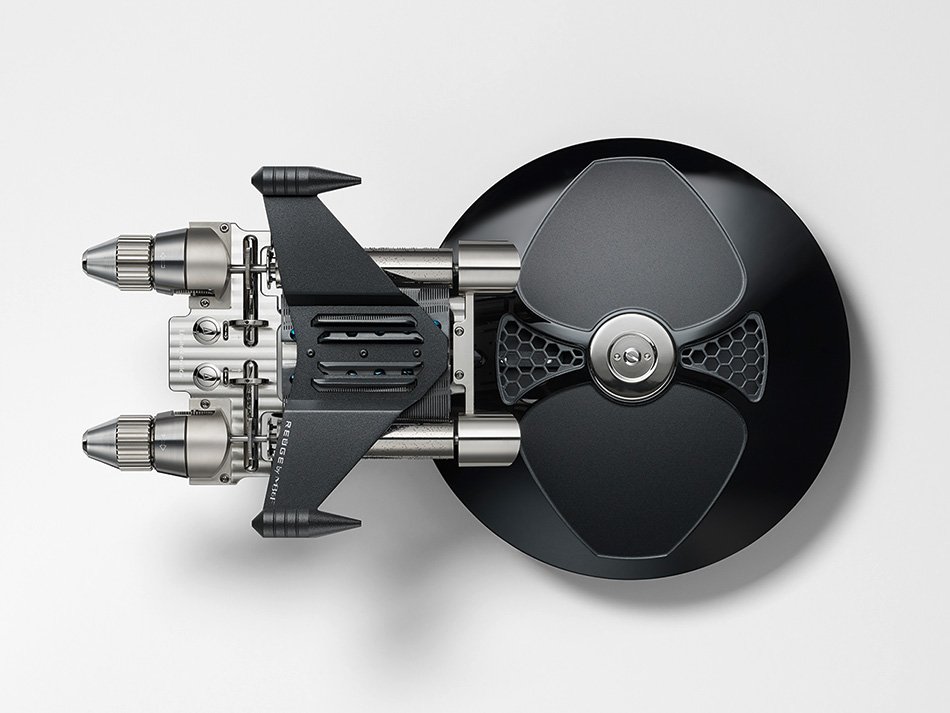 The two combs lie flat opposite each other, each forming a unique pair with its cylinder containing the bespoke selection of 72 notes. The combs are hand-tuned from a unique steel alloy selected for its acoustic impact. For bass notes, the tooth is thickened by the traditional method of adding lead. A machine then tests the frequency of each tooth and slivers of material are removed to accurately tune each note. Tiny transparent, synthetic feathers are added behind the bass note teeth, acting as dampers.

The beautifully hand-finished cylinders gleam like a pair of imposing reactors – ‘nacelle tubes’ in Star Trek speak. The cylinders essentially contain ‘the scores’ of the melodies, with as many as 1,400 precision-placed pins plucking the teeth of the comb as the cylinder revolves. The REUGE musician determines precisely where to place each pin. The pins are shaved to ensure uniformity of length and then polished.

Finally, hot resin is applied inside the cylinder, which, when hardened, rigidly fixes the pins to maximise sound quality. Once one melody is played, the cylinder moves along its long axis to align the right pins with the right teeth to play the next melody. Each melody corresponds  to one complete revolution of the cylinder. 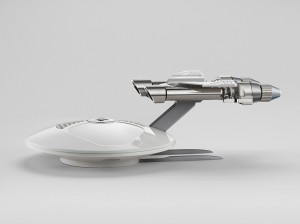 Resembling propulsion thrusters on each side of the tail section, the conical, grooved winding keys in nickel-plated brass are linear with the mainspring barrels and cylinders. This is an unconventional configuration for music boxes but MB&F’s daring design dictated it – it also allows a more efficient transfer of energy.

In the centre of the mainplate are distinctive vertical circular panels. While these look as though they may be radar dishes to navigate an asteroid field, they are actually the cylinder speed regulators. When fully wound, the main springs have more torque so tend to turn the cylinders faster than when nearly unwound. To compensate, these circular fan air regulators provide exponentially more resistance when rotating faster than slower, allowing for a constant revolution. A similar system is found in many minute repeater watches.

While MusicMachine 2’s tail section contains the engine, the main hull serves as the ‘resonance dome’. This shell is created out of one solid block of aluminium, which is machined before receiving a finishing touch by hand. The team at JMC Lutherie were asked to develop and integrate into this resonance dome a bespoke soundboard.

JMC’s Jeanmichel Capt explains: “It was a great test for us because the music box movements were separate from the resonance dome and internal soundboard. So we had to ensure the sound energy was transmitted between the two as efficiently as possible. I had many a long night trying to come up with a way of doing that!”

SOUNDBOARD PRINCIPLES
“Wooden soundboards traditionally feature on stringed instruments such as violins, guitars and pianos,” says JMC Lutherie’s CEO Céline Renaud. “The board is vibrated by the strings, creating the same frequencies and all harmonics. In MusicMachine 2, it is the music box movements, rather than strings, that generate the sound energy.

“Not only does MM2’s Soundboard amplify the sound, but the presence of the resonance spruce offers warmth, roundness, power, precision and colour to the sound, which is the meaning of music.”

MusicMachine 2’s internal soundboard features two wooden membranes made from 350-year-old resonance spruce from the Risoud Forest in Switzerland, where long, cold winters and poor soil lead to slow tree growth, occasionally producing an extremely dense wood boasting superlative acoustic properties. Each resonant tree is selected by one man, lifelong ‘tree gatherer’ Lorenzo Pellegrini. An octogenarian, Lorenzo still can climb trees like a squirrel, and he hugs each trunk to see if it is straight enough to create a sufficiently resistant soundboard.

Such is the criteria for selecting appropriate wood that only one in 10,000 spruce trees is good enough to feature in a soundboard! The tree is cut down in November during a waning moon when the tree is in its driest state. The wood is left to dry for a further five to ten years and then prepared at specialist sawmills and cut into quarters. A primer is used to close the  wood fibres before a non-penetrating varnish is applied.

TWO SOUNDBOARDS IN ONE

“Usually, to generate good frequencies and loud volume, you would increase the size of the soundboard,” says Jeanmichel Capt. “But with MusicMachine 2, we were limited by the size of the main dome, so we created a board that effectively makes the sound of two soundboards!”

To achieve this, Capt sandwiched the two spruce membranes around Nomex®, a honey comb-structured variant of Kevlar, fixing them together with special luthier glue applied using a vacuum press and paying close attention to their thickness.  “Thinner or thicker, the soundboard would not generate the same frequencies as those generated by the music box movements,” says Capt. “So we had to get the dimensions of the spruce membranes and the Nomex® just right.”

Through the centre of the honeycomb, and making full contact with the two membranes, is solid rectangular cuboid bar made of carbon fibre that both rigidifies the board and diffuses the sound vibrations as efficiently as possible over the full surface of the spruce membranes. Part of the trick here is to place the carbon bar at a right angle to the grain of the spruce: This perpendicular configuration moves the sound energy up to 10 times more quickly across the spruce membranes, for maximum volume.

SOUND-CONDUCTING TAIL BOOM
To complete the puzzle, JMC still needed to connect the soundboard to the music box movements on MusicMachine 2’s tail fin, and so, in tandem with the REUGE team, they created the specially-shaped tail boom made of aluminium, a material selected for its sound-conducting properties. JMC engineered the end of the boom so that it makes optimal contact with the carbon bar and is placed at the ‘sweet spot’ of the soundboard.

Finally, JMC also helped REUGE to isolate the zone on the mainplate from where sound energy emanates – where the combs are fixed with heat-blued screws. This isolation enables the retention of as much sound energy as possible so it channels down the tail boom, through the carbon rod, through the Nomex® honeycomb and across the spruce of the soundboard.

While the tail boom essentially performs the function of a bridge to transmit the vibrations – just like on a guitar or a violin – the vent holes in the resonance dome act like a hole on a guitar, letting out the sound from the soundboard.

“I was dazzled when I saw the first finished MusicMachine 2, and then just blown away when I heard it,” says Maximilian Büsser. “This is the first music box of this size which is not only so loud and clear, but also works in ‘stereo’ – you can hear the melody simultaneously from the combs and from the resonance dome. Even more incredibly, it does not require a special surface to place it on – it sounds superb wherever you put it. For me, that makes a triple world premiere!”