Talking to Alexander Schmiedt, Managing Director watches, about the new collections, we found out the perpetual calendar watch is the flagship in its collection, while the Meisterstück Heritage Pulsograph is described by Schmiedt as “the cherry on top of the cake” and “fine watch making at its best.”

The Timewalker Chronograph is another 2014 novelty, combining a sporty look with a classical design.

One of its variations, the Timewalker Chronograph 100, “takes performance and innovation to the next level,” says Schmiedt.

Schmiedt ended by affirming the brand’s motto “share the passion”, a passion Montblanc is indeed looking to spread in Dubai by inviting its fans to visit its boutiques to see, touch and feel its products.

The highest art of watchmaking: The Innovative Tourbillon with Additive Stopping 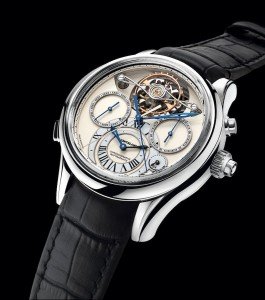 With the ExoTourbillon Rattrapante from the Collection Villeret 1858, Montblanc presents a unique timepiece in the world of haute horlogerie. This wristwatch combines a split-second chronograph and Montblanc’s patented ExoTourbillon, which has a large balance that oscillates outside the tourbillon’s rotating cage. The three-dimensional regulator dial is made of gold, decorated with grand feu enamel elements crafted in accord with the tradition of ultrafine watchmaking, and includes a display for a second time zone with a day/night indicator.

The Montblanc Manufacture in Villeret has acquired comprehensive expertise in the discipline of grandes complications. The manufactory’s history began in 1858, when it was established under the name “Minerva”. The manufactory is one of the few which doesn’t only fabricate components: ever since its earliest days, complete and meticulously handcrafted movements have been developed and built here. Their ongoing development and the broad know-how in the discipline of measuring brief intervals led to the production of split-second stopwatches in the mid 1930s. So-called rattrapante chronographs can measure intermediate times without interrupting the ongoing measurement of a longer elapsing interval. These stopwatches from the manufacture in Villeret were used successfully at the Winter Olympics in 1936.
Today too, the Montblanc Manufacture unites traditional Swiss horological craftsmanship of the highest level and an indefatigable striving for innovation.

The ExoTourbillon Rattrapante indicates the time of day or night as do regulator clocks. With the main stage for the minute-hand, a subdial for the continuous second at 9 o`clock and the hour-hand that slowly circles its subdial at “6 o’clock”, this timepiece features the same arrangement as it was used on the faces of the long-case regulator clocks that kept time more than two centuries ago in the ateliers of famous watch manufactories. The regulator display on the dial of the ExoTourbillon split-second chronograph is augmented by an indicator for the time in a second zone. Two hour-hands leisurely sweep around the smaller dial at “6 o’clock”: a skeletonised hand for the hour in the current local time zone and a blued hand for the hour in the wearer’s home time zone. A 24-hour indicator augments the ensemble.

The Highest Level of Accuracy

Only a handful of Manufactures around the world possess the capacities and know-how to manually fabricate the balance springs of mechanical timepieces by hand. The Montblanc Manufacture in Villeret is among this select group. The master watchmakers themselves make the balance springs in their entirety, measuring their length, not by electronic means, but, in accordance with tradition, by hand and to the utmost accuracy. This striving for perfection also finds expression in the sophisticated finishing operations with which the watchmakers of the Manufacture in Villeret enhance the appearance of each individual component of the movement. Edges are chamfered by hand, plates are artistically ornamented with Geneva stripes and wheels are given a high polish. The watchmakers use traditional materials such as Grand-Feu enamel for the dials, where they rely on techniques that impressively reveal their craftsmanly expertise.

Laborious handcraftsmanship, invested in each ExoTourbillon Rattrapante from the Montblanc Collection Villeret 1858 and performed in accord with authentic Swiss watchmaking tradition, explains the limited number of watches in the series of these grandes complications timepieces. This model is therefore available only in a strictly limited edition of eighteen watches, each with an 18 karat white gold case.

The circular gold case measures 47 mm in diameter, is polished to a high-gloss finish, and is harmoniously augmented by a highly domed sapphire crystal with vertically descending flanks. The screwed back includes a sapphire crystal viewing window through which connoisseurs can admire the elaborate chronograph mechanism with its additional split-second function. The chronograph’s column-wheel is visible at “6 o’clock”; the split-second column-wheel can be seen near the split-second button; and between the two, an aficionado will find the artistically shaped coupling-, braking- and heart-levers as well as the split-second clamps with their springs. The edges of these components are bevelled, their surfaces are brushed, and their flanks bear fine, elongated embellishments. The perfection of these elaborate decorations is assured only when they’re crafted by hand. Their bright gleam contrasts beautifully with Geneva waves on the bridges, glossy red jewels, and gold-plated wheels.

The hairspring has an upward Phillips curvature at its outer end and oscillates at the traditional pace of 18,000 semi-oscillations per hour (2.5 hertz), thus enabling this chronograph to measure elapsed intervals to the nearest fifth of a second.

The watch is affixed to a black alligator-leather wristband secured by a pronged buckle made of 18 karat white gold.

The ExoTourbillon Rattrapante is available for a price of € 250,000.

A new interpretation of Rieussec’s chronograph from 1821

Nicolas Rieussec’s first patented chronograph from 1821 inspired the watchmakers at Montblanc to create the Nicolas Rieussec watch collection with manufacture movements and distinctive styling. The timepiece’s unmistakable appearance combines an off-centre hour-circle in the upper part of the dial and the chronograph’s elapsed-time displays in the lower portion of the face. As on the original from 1821, elapsed time is shown on two rotating discs, above each of which a motionless hand indicates the passing seconds and minutes. Nicolas Rieussec, watchmaker to the French royal court, invented this construction to precisely measure the running times of individual horses at a horserace. When the starting gun was fired at the track, the patented “ink chronograph” was set in motion so that two white enamelled discs began to turn: one disc was calibrated for 60 elapsed seconds, the other for 30 elapsed minutes. The user pressed a button each time a horse crossed the finish line: this pressure momentarily lowered an elongated rhombic carrier with two ink-filled tips onto the enamel discs, where each tip left a droplet of ink. These inky markings on the scales of the chronograph’s discs enabled the user to read the exact running time of each horse. Rieussec’s device was literally a “time writer,” so he accordingly named it a “chronograph” from the Greek words “chronos” (time) and “graphein” (to write). In 1822, the Académie des Sciences in Paris granted a patent on this device to Nicolas Rieussec, who went down in horological history as the inventor of the world’s first patented chronograph.

In 2014, Montblanc pays tribute to this great clockmaker with a new interpretation of his chronograph from 1821. The Montblanc “Homage to Nicolas Rieussec” chronograph faithfully replicates every detail of the colour scheme and the styling of the hands as they appeared on the original “time writer”, but relies on innovative materials and technologies to transport the historical device into our contemporary day and age. The new “Homage to Nicolas Rieussec” chronograph from the Montblanc Nicolas Rieussec collection shows the date, indicates the time in two different time zones and also offers a day/night display. The timepiece will be manufactured in limited editions in rose gold and steel.

In an unprecedented innovation, the chronograph’s hand is designed as a double index: each of the two tips of an elongated horizontal blued-metal rhombus points to a calibrated scale on one of two rotating discs. Each index is shaped exactly like the ink carriers on the original chronograph from 1821. The two whitelacquered discs – one at the left for 60 elapsed seconds and the other at the right for 30 elapsed minutes – are likewise inspired by the appearance of the original timepiece.

At first glance, the watch’s hour-circle seems to lack hour numerals and to bear only a minute-scale. With slim black strokes alternating with Arabic numerals at ten-minute intervals, the minute-circle faithfully emulates its counterpart on the original “time writer”, the position of the hands allows precise legibility of the hours.

The hour-circle reveals its special feature in the dark, when an unprecedented technique causes the formerly hidden hour numerals to appear on the dial. The traditionally styled hour-circle is crafted from ultramodern hybrid ceramic permeated with Superluminova pigments. These luminous pigments form the Arabic hour numerals in the characteristic font of the Montblanc Rieussec collection. The digits are invisible in daylight because they’re precisely embedded into the hour ring, with which they share exactly the same colour. But when the ambient light starts to dim, the luminous pigments that fill the numerals – as well as the Superluminova-filled hour-hand and minute-hand – begin to glow, thus assuring perfect legibility and simultaneously giving this watch its characteristic appearance.

The pale, shiny, enamel-like surfaces of the hour-circle and the chronograph’s discs create an unusual contrast with the fine-grained (grainé) texture of the dial. Two apertures rimmed by finely satin-finished gradations offer an unobstructed view of the date display at “3 o’clock” and the finely guilloche-embellished day/night indicator at “9 o’clock”. A skeletonized hour-hand indicates the time in a second time zone.

A monopusher chronograph with a manufacture calibre

Combining traditional watchmaker’s craftsmanship and modern engineering artistry, self-winding mechanical manufacture Calibre MB R200 ticks unseen beneath the innovative dial. A laboriously milled column-wheel controls the monopusher chronograph; the connection between the gear-train and chronograph’s wheels is alternately engaged and disengaged by a vertical coupling, which functions nearly without wear and prevents the elapsed-time hands from jumping when the chronograph is switched on. The double barrel stores enough power for 72 hours of continuous running. The movement’s appeal derives not only from its outstanding mechanical performance, but also from its horological aesthetic. The components are decorated with Geneva waves and have beveled, polished edges. Bright red jewels, blued screws and shiny golden brass wheels complete the handsome ensemble, which can be admired by peering through the transparent pane of sapphire crystal in the back of the case.

The dial is protected by a slightly cambered sapphire crystal that’s been antireflective treated on both its surfaces. The movement is ensconced inside a circular case made of 18 karat rose gold. The case’s doubly stepped horns angle slightly downward so the 43-mm-diameter watch fits ergonomically and conforms to the anatomy of its wearer’s wrist. A watch connoisseur who notices the unconventional positioning of the chronograph’s button at “8 o’clock” will correctly deduce that this is a monopusher chronograph which can be conveniently operated with the tip of the right thumb. The rose gold crown is deeply grooved and embellished with a domed black-and-white Montblanc emblem. A pin buckle made of 18 karat gold secures the alligator-skin strap, which conforms to the curvature of the horns and the roundness of the case.

The Montblanc “Homage to Nicolas Rieussec” chronograph will be available starting in the autumn of 2014 in a limited edition of 193 rose gold timepieces priced at 26,900 euros each. The number of watches in the edition likewise pays homage to the man who invented this genre of watch – because 193 years ago was the birth of the first patented chronograph from Nicolas Rieussec.