The crowdy Hublot Press conference just ended with CEO Ricardo Guadalupe and Jean-Claude Biver, Chairman of Hublot and President of the Watches Divsion, LVMH Group, with the presence of the Double Olympic Ski Champions Maria Höfl-Riesch and Dario Cologna to celebrate Passion and Success !

In honour of The Special One – football coach José Mourinho – who recently rejoined the prestigious ranks of the Hublot ambassadors, Hublot has unveiled the aptly named King Power Special One. With a strapping diameter of 48 mm and a sleek, sporty design, the King Power is not your average watch, and this is evident at first glance. It’s the dark blue carbon fibre that grabs your attention. It’s new. It is the result of an unprecedented technical process. The colour is directly integrated in the fibres arranged in the mould, and the whole assembly is then pressurised. The colour is thus WITHIN the material. The visual effect is emphasised by the moulded bezel – also blue – and the rubber inserts for the push-buttons and crown. The counters, hands and minute track are in the same blue, and the piece is completed by a navy blue alligator strap which underscores the unique character of this watch. Why blue? Because it’s somewhat the signature colour of José Mourinho; his ties, his shirts – he always wears a touch of blue. His signature also appears on the back of the watch.

The beating heart of the watch is the Manufacture’s UNICO chronograph movement, entirely designed, developed, machined and assembled by the micro-mechanical engineers, engineers and watchmakers at Hublot. This Flyback chronograph (a practical solution enabling instant restarting of the chronograph) is unique in the watchmaking industry, and features two push-buttons and a date indication. It is distinguished by the position of its mechanism with a horizontal double clutch and the famous “column wheel” visible on the dial side. A central 60-second counter and a small 60-minute counter at 3 o’clock offer the wearer excellent functional visibility. The pallet fork and escapement wheel are made from silicon, whose lightness guarantees excellent performance.

The movement’s 330 components benefit from high reliability, with several of them produced using LIGA technology. These are manufactured via material growth, which ensures precision production down to micron level. In addition to the precision quality, it also offers the possibility of creating original shapes and designs (for example, our dual-arm micro-toothed clutch and second deviation wheels for the chronograph are only possible thanks to this technique). The frequency of 4hz/28,800 vibrations per hour and the immaculate finish are also a guarantee of high chronometric quality. Finally, its automated production, which includes automation of the machining, stone fitting, oiling and numerous assembly operations also ensures consistent, controlled quality. Two versions of this exclusive model were presented at Baselworld: titanium or King Gold (Hublot’s famous red gold, redder and more precious thanks to the addition of 5% platinum). 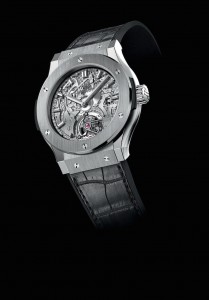 Born of the desire to pursue an independent route enabling Hublot to design and produce its own movements, the brand has now unveiled its second Minute Repeater coupled with a tourbillon. Exhibiting a marvellous balance between the classic style of its two major complications, a symbol of watchmaking art, and the dynamic, modern design of the Classic Fusion 45 mm, this piece is a fine exercise in style that demonstrates the principle of fusion between Tradition and Modernity.

Entirely designed, developed and produced by the micro-mechanical engineers, engineers and watchmakers at Hublot, and this new Grande Complication is the result of 24 months of R&D. Fully remodelled and optimised since the first version appeared in 2010, the new Tourbillon Minute Repeater retains all of Hublot’s DNA.

The sapphire dial reveals the HUB 8001 hand-wound mechanical movement, with its tourbillon escapement and the Minute Repeater mechanism. Among the notable new features are the newly designed time setting function and a traditional tourbillon with its 13.6 mm diameter cage, which rotates once every minute, and boasts a highly stable construction thanks to the barrette on the dial side.

The assembly of its 319 components – bridges, cams and springs, racks and hammers, gongs and snails, cage, wheels, jewels, screws – is a unique decorative element in itself, beautifully complemented by the watch’s hands, which are red gold- or rhodium-plated, like the case.

One of the technical feats achieved on the Minute Repeater, whose construction requires a level of expertise possessed by only a small number of manufactures, is the complete integration of the trigger piece in the left-hand bezel lug of the Classic Fusion’s case. This means it is no longer an appendage – as is usually the case – but rather a cleverly integrated function which results in a watch with a particularly harmonious appearance.

The power of the double cathedral chime and the exceptional clarity of its tone has already brought it to the attention of connoisseurs. Finally, the Tourbillon Minute Repeater, which has a power reserve of 5 days, is water-resistant to 30 metres – a highly complex achievement at this level, and much sought after by connoisseurs. The sound of the chime no longer relies on airborne transmission, but rather resonates through the material of the case.

The watch has an aesthetically pleasing diameter of 45 mm. The piece looks beautiful in King Gold (extra-precious gold containing 5% platinum) or titanium, the two versions in which this new model is available. It is completed with a strap, with a deployant buckle, in black alligator leather sewn onto tone-on-tone rubber for comfort, flexibility and increased leather durability.