Thursday, October 10th 2013. The official night where Vogue Italia and Dubai Cares embarked on the first of many events together: The Vogue Fashion Dubai Experience.

Crowds gathered from all over the globe for this ground-breaking event born of Franca Sozzani, Editor-in-Chief of Vogue Italia and Mohamed Alabbar, Chairman of Emaar Properties. World renowned designers, supermodels, celebrities, and the fashion Who’s Who of the Middle East all gathered for this event to not only boast eight fast growing and talented designers, but also to raise donations for Dubai Cares- a philanthropic organization set to promote education for children in developing nations.

From Naomi Campbell and Karolina Kurkova to the likes of Donatella Versace, Roberto Cavalli, Silvia Fendi, Philip Plein and Dean and Dan Caten of DSquared, the white on white rows surrounding the LED paved runway were filled with A listers from every corner of the globe ready for the brilliantly organized lineup of events set in store. 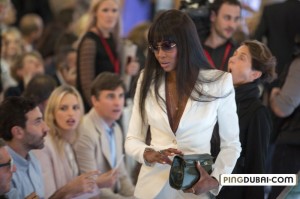 The night kicked off with a fashion show supported by bright lights, heavy beats, and the stare of over 200,000 eyes to view the collections of eight acclaimed emerging designers: Esme Vie, Lulwa Al Amin, Simone Rocha, Razan Al Azzouni, Andrea Incontri, Ashi Studio, Ituen Basi, and Wadha Al Hajri. All eight designers had something different to offer; all beautiful in their own way. Yet, one designer stood out as the nights favorite across the fashion conscious attendees- Ashi Studio by Mohammad Ashi; a Saudi born designer who took our breaths away with his combination of fashion and art in his haute couture, architectural and movement based designs- it was truly remarkable.

More than 250 brands were part of the nights stream of events including in-boutique experiences, fashion exhibitions, and animated shows highlighting some of the seasons most wanted items. From local musicians performing in elaborate boutiques to organized dancers strutting their moves with the help of the season’s hottest footwear- every corner of Dubai Mall had something to offer for the fashion minded individual.

The star-studded red carpet event continued at the invitation only gala dinner at the Armani Pavilion at the bay of Burj Khalifa where exclusive Vogue Experiences were auctioned to raise proceeds for Dubai Cares.

The night was an astounding success and a testament to the power of collaboration between fashion and philanthropy.

Our professional team of  international photographers have teamed up to bring you a 3 album photo experience of the event. We are pleased to share them with you below.

The Experience & Let The Shoe Begin at LEVEL

no images were found

no images were found

“Were you there? Let us know in the comments box below what YOU thought of this first ever MEGA Fashion Event in Dubai”