Valentine’s Day -February 14- was the perfect date for the Emirates Airlines Dubai Jazz Festivalto launch its 2013 edition. Organized by Chillout Productions, this multi-day celebration of music debuted with the jazzy vibe of Gary Honor, playing his saxophone at the Jazz Garden, followed by Lebanese musician, composer and pianist Guy Manoukian.

When I walk into the huge Festival Park venue at Dubai Festival City, I recognize the tune coming from the Jazz Garden; it is the melody to one of Dalida’s songs. I instantly recognize the style of Guy Manoukian, whose “lyric-less” music would wake up emotions in any listener. A few minutes later, the famous “George” jumps from the stage and stands on a bench among the crowd; with his drum, he jolts the attendance up to its feet and leaves us clapping and whistling.

As the Jazz Garden performance ends, small groups of people flock in the main arena. Red spots appear everywhere; everyone seems to be using red hats and blankets distributed by one of the main sponsors to keep warm, and add a Valentine’s Day feel to their night. 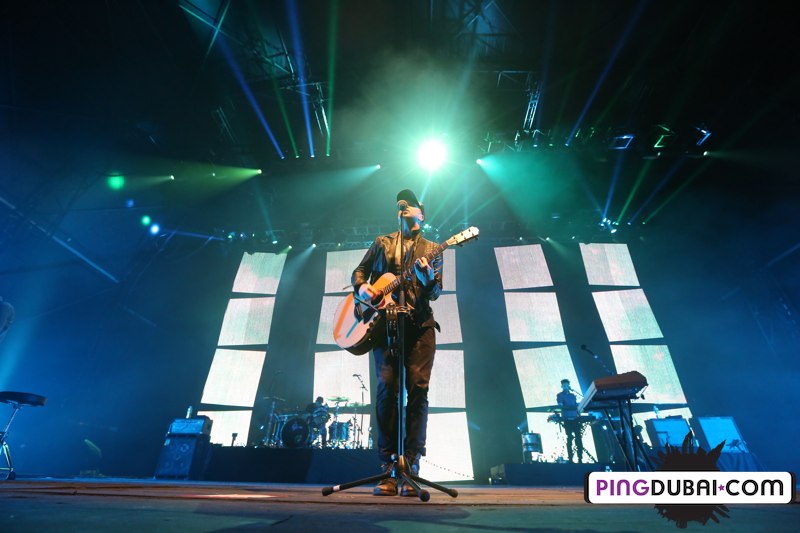 A chilly breeze takes over the area… At 10:30pm, as if on cue, the powerful sound of a cello rises in the air, giving us goose bumps and adding to the chills we feel due to the weather. Lead singer Ryan Tedder shares “All My Secrets”.

The crowd, who recognized the song well and sings along, is taken even more when the band members “Stop and Stare” and does “All The Right Things”, with Tedder stroking the blacks and whites on the keyboard.

“Good evening Dubai… The weather is beautiful… We are going to play a song that you haven’t heard before,” he announces, and the band performs “Life In Color”, followed by “For What It’s Worth”. The crowd claps with Ryan to the rhythm of the song, then keeps “Marching On”, repeatedly “marching on, marching on”.
“Oh beautiful Dubai! You guys have an incredible pitch. So this next song was recorded in SouthAfrica, in Johannesburg.” A loud cheer roars from a group behind us, South Africans, undoubtedly. It is always nice to hear artists mention one’s country.

Tambourine in hand, Tedder sings “Everybody Loves Me”, launches into “Apologize”, and eases in Rihanna’s “We Found Love”, as One Republic usually does during live performances, in conjunction with “Apologize”. And as “we fell in love in a hopeless place”, the stage basks in warm, yellow rays of light. A cello solo cradles us, and we are invited to “sing it”.

After this heartfelt piece, the singer jokes about not having bought gold from vending machinesin Dubai and tells us about having had a bedouin breakfast on the Sheikh’s property in the desertthat morning: “It was incredible! You can basically drop these guys off anywhere in the desert, in any part of this world, and they would survive. I would last three hours if you drop me off in the desert.” The crowd laughs, and cheers loudly when he announces he has had some of the best food ever in Dubai.

The band offers us “If I Lose Myself”, a new single from their new album which is due to come out on March 26. A kaleidoscope of lights adds magic to the moment, right before we live the “Good Life”. The band’s originals end beautifully with “Feel Again”, a V-day special and my personal favorite of theirs.

As habit dictates, and to the pleasure of the fans, One Republic performs a medley composed of their versions of Ben E. King’s “Stand By Me”, followed by The White Stripes’ “Seven Nation Army” and Justin Timberlake’s “Sexy Back”. Quite an interesting mix!

Tedder hums “Sky Fall” but quickly says: “Nah, I don’t know that song. But she is great!” he adds, referring to Adele.

“We’ll be back in Dubai!” he reassures us, finishing off with the last song “Waking Up”, before disappearing into the darkness.

We are looking forward to enjoying the other musical talents of this year’s Jazz Fest.