A deeper look into IWC from SIHH 2014

An aquatic atmosphere reigned over the IWC booth at SIHH. Within that oceanic realm, we learned more about IWC’s Department Manager Sponsorhips & Partnerships Yan Lefort experience with the 3 lettered brand, and about its global and regional sponsorship and partnership strategies.

For IWC, being the official engineering partner of the Mercedes AMG Petronas Formula 1 team is a “celebration of all the engineers and the people working back at the factory and at the garage.”

Among the novelties presented this year are four Aquatimer special editions in support of the work of the Charles Darwin Foundation and the Cousteau Society.

An IWC customer will always have something new to buy, as the brand is constantly innovating its technology and enhancing its designs in a quest for more growth. 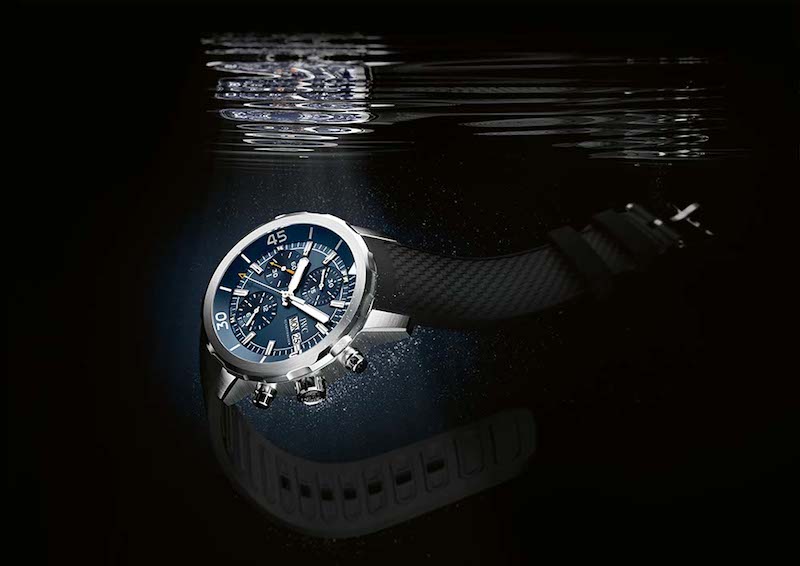 The evolution of the diver’s watches from IWC continues. The 2014 Aquatimer collection from IWC Schaffhausen comes with inspired technical features, even more in-house calibres and a patented IWC bracelet quick-change system. For the first time ever, a haute horlogerie complication in the form of a perpetual calendar with a large digital date display appears in this watch family. Bronze likewise makes its debut as a metal for the case. The Swiss watch manufacturer is also launching four special editions in support of the work of the Charles Darwin Foundation and the Cousteau Society. 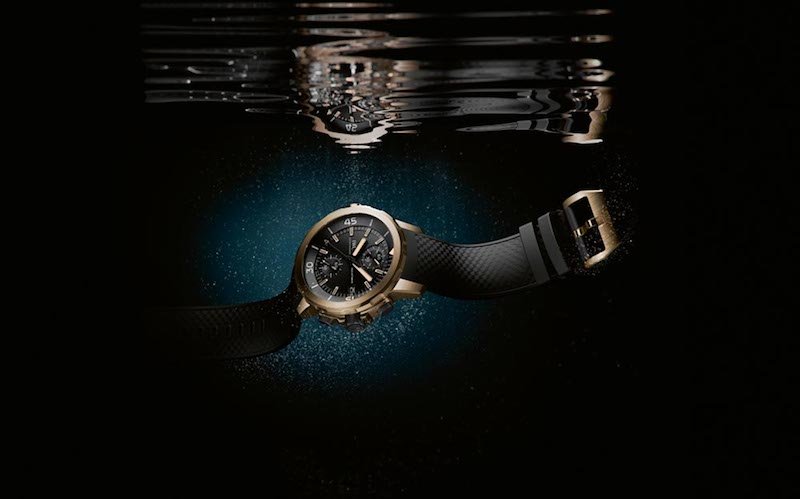 With the special edition Aquatimer Chronograph Edition “50 Years Science for Galapagos”, limited to 500 watches, IWC honours the 50th anniversary of the Charles Darwin Research Station, a scientificinstitution set up by the Charles Darwin Foundation on the Galapagos Islands. The Aquatimer Chronograph Edition “Galapagos Islands”, with identical technology, is an expression of IWC’s commitment to the threatened archipelago. For the first time ever, this special edition is equipped with an IWC-manufactured movement. Both watches are powered by the in-house 89365 calibre and come with an attractive black rubber coating. 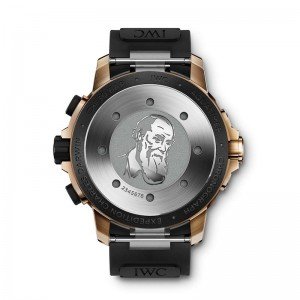 Hardly any other man of science has changed our view of the world like Charles Darwin. The findings of the expeditionmade by the British naturalist, who discovered the key to his theory of evolution on the Galapagos Islands almost 180 years ago, are clearly illustrated in the Research Stationon Santa Cruz. The Charles Darwin Research Station, on the second-largest island in the archipelago, was built in 1964 and is today indisputably the scientific centre of the Galapagos. Over 100 scientists, students, teachers and volunteers from all over the globe work tirelessly to research the indigenous flora and fauna and to preserve the Galapagos World Heritage Site from destruction. The Station trains national park guides, organizes seminars for teachers and students, publishes the findings of its research and collects donations. Children and young people are introduced to the topic of environmental protection through a combination of teaching, art and entertainment. All these efforts are made because the laboratory of evolution is seriously threatened. “We are faced with enormous challenges if we are to preserve the biodiversity of the indigenous fauna and flora on the Galapagos for future generations,” explains Swen Lorenz, CEO of the Charles Darwin Foundation. “Merely combating invasive species and developing sustainable concepts for acceptable levels of tourism are incredibly costly and labour-intensive. We are very grateful for the support we have received from our long-term partner IWC Schaffhausen.” The Swiss company has sponsored and supported the Charles Darwin Foundation since 2009 and thus made a substantial contribution to the continuation of its research work. Georges Kern, CEO of the watchmaking company: “IWC Schaffhausen pledges itself to ecologically responsible behaviour and pursues a corporatestrategy based firmly on sustainability. As the manufacturerof diver’s watches, IWC believes it has a special obligation to preserve the unique world of the Galapagos, both above and below water. We know that the work of the Charles Darwin Research Station is indispensable for the preservation of biodiversity on the Galapagos Islands and congratulate it on its 50th anniversary.” To mark the occasion, IWC has created the Aquatimer Chronograph Edition“50 Years Science for Galapagos” (Ref. IW379504), which is limited to 500 pieces. The technically identical AquatimerChronograph Edition “Galapagos Islands” (Ref. IW379502) symbolizes the commitment IWC has shown to the threatened archipelago since 2009. For the first time ever, this special edition is equipped with the IWC-manufactured 89365 calibre, which has considerably increased its value and status. Part of the proceeds from  sales will flow directly into the scientific work of the non-profit organization. 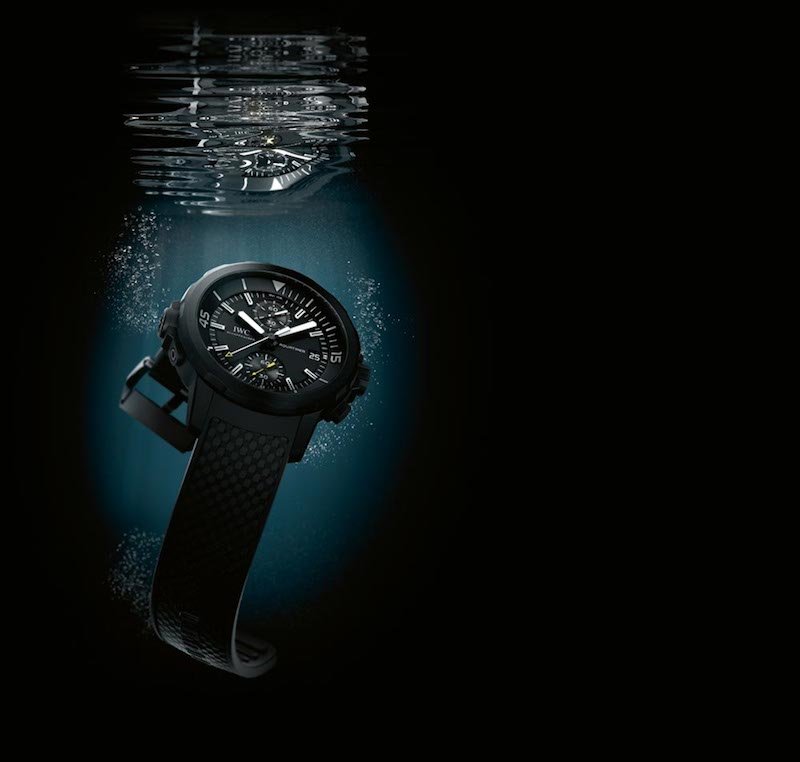 BLACK AS THE LAVA ON THE VOLCANI C ISLANDS 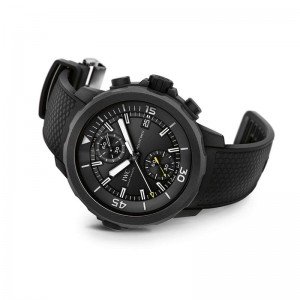 The attractive matte black rubber coating on the stainless-steel case is a special feature of the two Galapagos editions.It is applied in a complex vulcanization process, during which each individual case is placed in a special mould and subjected to heat and pressure to bond it with the rubber. The material is warm to the touch, very resilient, and gives the watch a chunky feel, which makes the chronograph particularly pleasant to operate. While the Aquatimer Chronograph Edition “Galapagos Islands” (Ref. IW379502) comes with the familiar black-and-white contrast (black for the lava on the volcanic islands, white for the mist in which they are often shrouded), the hands and indices of the anniversary Aquatimer Chronograph Edition “50 Years Science for Galapagos” (Ref. IW379504) are a striking luminescent blue. The colour will perhaps remind people familiar with the Galapagos fauna of the exotic blue-footed booby. This engaging bird, which early mariners used to ridicule for its trusting nature and waddling gait, flies skilfully and is a fantastic plunge diver when on the hunt. Whole flocks of blue-footed boobies nosedive from enormous heights like arrows into the sea in synchronized manoeuvres: an unforgettable natural spectacle. 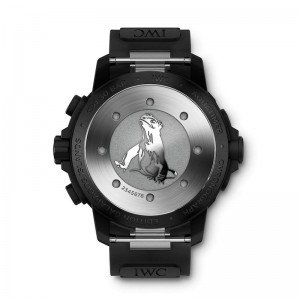 The hands and indices of the two watches are coated with several layers of Super-LumiNova®* and glow in the dark in two different colours. The diver thus knows immediately which display shows the time of the day and which shows his dive time. The new external/internal rotating bezel makes operation easier with diving gloves or cold fingers. The rotation of the bezel is transmitted through a sophisticated sliding clutch system to the interior of the case and the internal rotating bezel. The IWC SafeDive system ensures that elapsed dive time is not inadvertently shortened. The IWC-manufactured 89365-calibre movement displays elapsed minutes in the upper subdial; times of less than a minute are measured by the central stopwatch hand. The seconds hand in the lower subdial indicates that the watch is running normally and can be stopped to enable synchronization. Thanks to the integrated flyback function, pressing the reset push-button brings the stopwatch hand back to zero and immediately starts timing again: a feature that is ideal for measuring decompression stops. Like all the watches in the 2014 Aquatimer generation, the two Galapagos editionsare equipped with the practical IWC bracelet quick-change system. 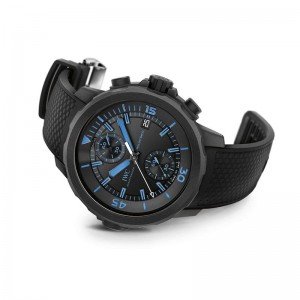 In the 50 years since its inauguration, the Charles Darwin Research Station has achieved much in its mission to document and preserve one of the Earth’s last great naturalparadises. Scientifically controlled breeding programmes have saved several species of the legendary Galapagos giant tortoises from extinction. In a struggle lasting decades, imported and feral domestic animals such as goats, dogs, cats and pigs, which represent an enormous danger to indigenous species, have been contained. A quarantine programme helps prevent invasive species from making further inroads: a mammoth task in view of the more than 180,000 tourists who visit annually, numerous cruise ships and a busy airport. Successes important for the islands but also for the surrounding waters have been achieved. In 1998, for instance, a marine reserve was created around the Galapagos. In 2001, the World Heritage Site was extended to include the Galapagos Marine Reserve and became one of the largest marine conservation areas in the world. The Galapagos Islands were listed as a World Heritage Site as early as 1978. Many of the creatures on the Galapagos, such as marine iguanas, sea birds and sea lions, whose habitat includes both the land and the sea, benefit from protection. 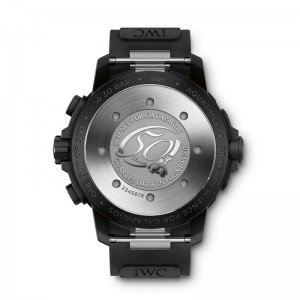 The Ecuadorian authorities are taking stringent measures to eliminate the practice of finning, when sharks are hunted down and stripped of their fins. But there is still much to do. The Research Station is currently engaged in a struggle to preserve the mangrove finch, a subspecies of the Darwin finches that is threatened by extinction, and of which there are approximately 70 left. The Station’s pride that the Galapagos Islands have yet to lose a species of bird is equalled only by its ambition that this is the way it should remain. With these two special editions, the Aquatimer Chronograph Edition “50 Years Science for Galapagos”and the Aquatimer Chronograph Edition “Galapagos Islands”,IWC Schaffhausen is helping to ensure that the Charles Darwin Research Station will be able to continue its vital field research and educational work well into the future; because part of the proceeds from sales  goes directly to the Charles Darwin Foundation. And thus to the fascinating world of the Galapagos archipelago. 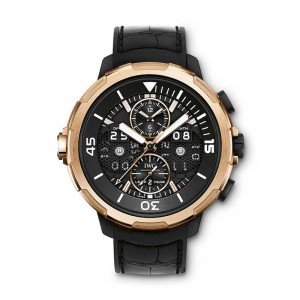 Limited to just 50 watches, the Aquatimer Perpetual Calendar Digital Date-Month combines state-of-the-art technology with quality looks. Hidden away inside the case made of unusual materials such as rubber-coated titanium and 18-carat red gold is a perpetual calendar with a large digital display showing the date and month. The integrated quick-action switch, which advances the month display, has one thing in common with the Galapagos marine iguana: they are both masters of energy efficiency 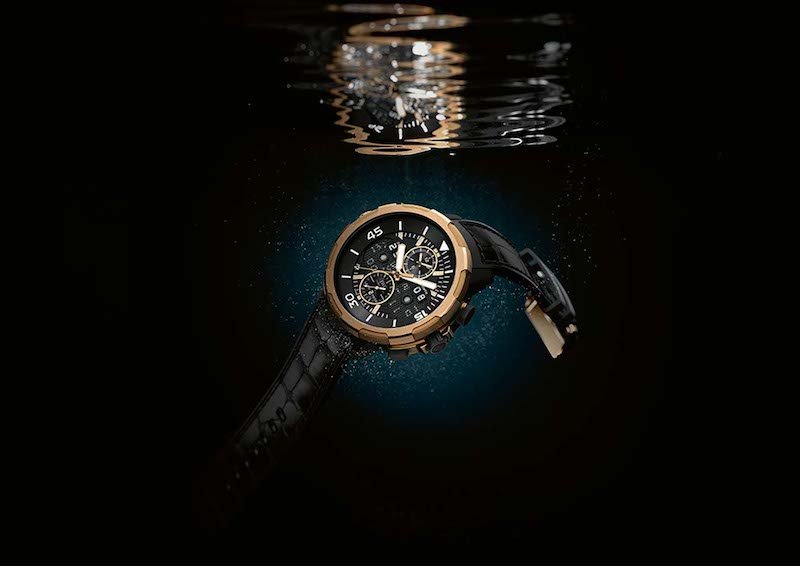 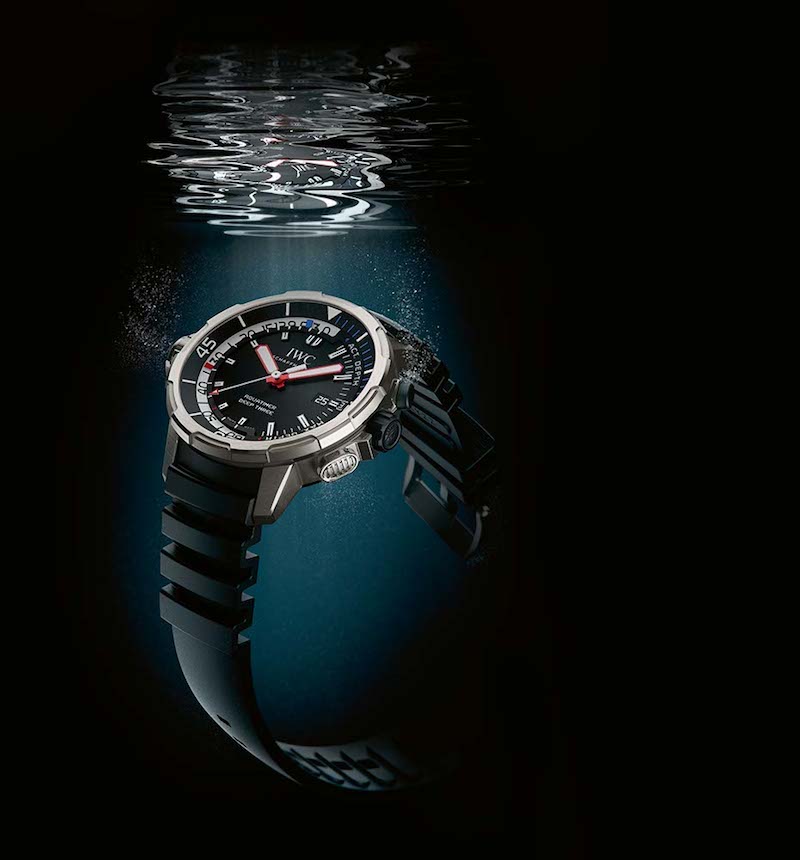 The Aquatimer Deep Three is already the third generation of the IWC diver’s watches to feature a mechanical depth gauge. The continuous development of the depth gauge and rotating bezel systemtestifies to the Schaffhausen watch manufacturer’s resolve to further consolidate its technological advantage in complex mechanical solutions.

As practised divers are aware, scuba diving is a safe and exciting sport as long as you can rely on your equipment and observe a few basic rules: never dive alone; always ensure that you have a backup of your vital technical systems, such as regulators and depth gauges; and keep a close check on current depth, maximum depth attained during the dive, and dive time. This will allow you to ascend slowly enough and to make any necessary decompression stops. For the first rule, you have your dive buddy; for the second, your spare demand valve, or octopus; and for everything else, the new Aquatimer Deep Three from IWC. Because if the electronics in your dive computer fail, the mechanical depth gauge and dive timer from Schaffhausen offers a reliable backup system for calculating all aspects of your dive. 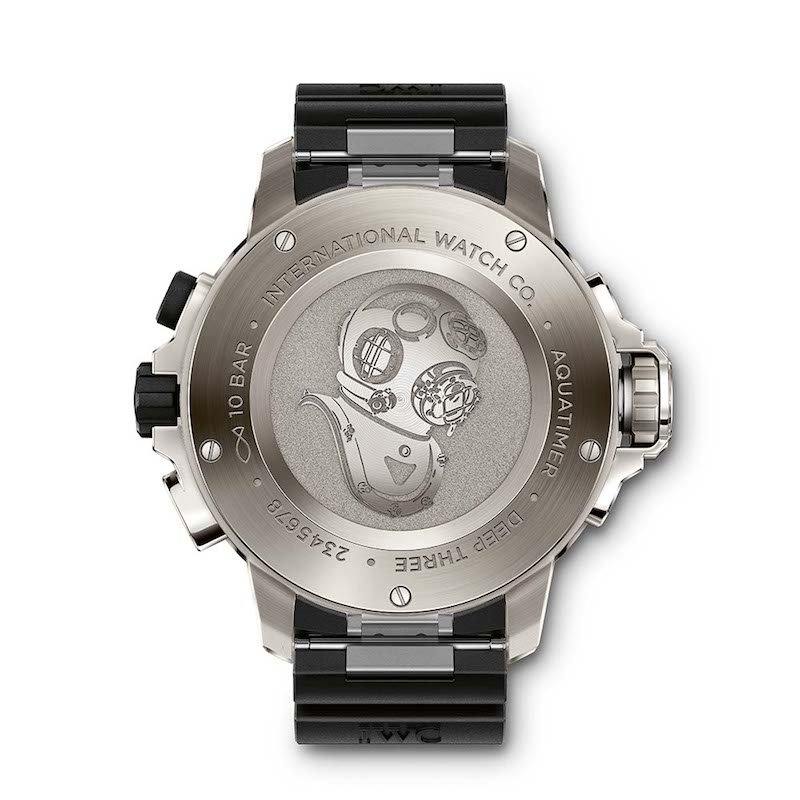 IWC SAFEDIVE: THE EVOLUTION OF THE ROTATING BEZEL SYSTEM