A twelve year Baume & Mercier veteran, Creative Director Alexandre Peraldi compares his path to a musician who has to learn classical music before being able to play jazz.

Building on the success of the Clifton watch in 2013, the brand presented new Clifton designs for men as well as a smaller size of the watch.

Committed to excellence in the measurement of time, Baume & Mercier, founded in 1830, offers watches with the goal of meeting the needs of men and women who desire a lasting impact in the special moments of their existence. Having found the right balance between tradition and modernity, authenticity and creativity, Baume & Mercier creates beautifully crafted timepieces with lines inspired by iconic pieces borrowed from its rich heritage while remaining faithful to its 184 year old motto, “Accept only perfection; only manufacture watches of the highest quality.”

Baume & Mercier Creative Director Alexandre Peraldi speaks to PING during SIHH 2014, reveal novelties and challenges for the brands when it comes to design. Enjoy the full video interview to know more.

The acclaimed Clifton collection, launched in 2013 and embodying the values of the seventh oldest watch manufacturer still in operation, has expanded for the SIHH 2014 exhibition, with outstanding models such as the Clifton 1892 Flying Tourbillon watch. The epitome of a luxury timepiece, it demonstrates how Baume & Mercier applies itself in implementing Swiss watchmaking expertise for each of its creations. This is how, in the Clifton collection, the brand presents three chronographs that are known to be the most popular watchmaking complication appreciated by watch lovers.

Wanting to fill a wide range of mechanical subtleties, it also is launching the Clifton Retrograde Date Automatic watch, a piece beautifully crafted to display its various features on an original style dial. Other recent developments include the existence of two-tone models in the Clifton collection, which effortlessly combine steel and red gold.

Perfect for everyday living because of their versatility and subtle finishes, the models of the Clifton collection are like the Linea pieces of the year, whose colored straps pay tribute to the colors of spring and summer – the expression of the watchmaking expertise of Baume & Mercier whose Phi logo, a symbol of divine proportion, also proves to be one of balance and equilibrium. 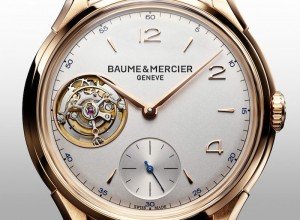 The SIHH 2014 salon sees the unveiling of Baume & Mercier’s Clifton 1892 Flying Tourbillon watch. This particular wonder, offered in a very exclusive edition of 30 pieces, aims to demonstrate the excellence of Swiss watchmaking and remind the world that Baume & Mercier, the seventh oldest watch manufacturer still in operation, has real expertise in the art of making accurate and complicated watches.

This new model included in the Clifton collection gives a fair idea of the true measure of Baume & Mercier’s art, expressed in its motto since the Maison’s founding in 1830: ÅsAccept only perfection and only manufacture watches of the highest quality.Åt This timepiece, with its exclusive hand-wound caliber is the epitome of Haute Horlogerie. 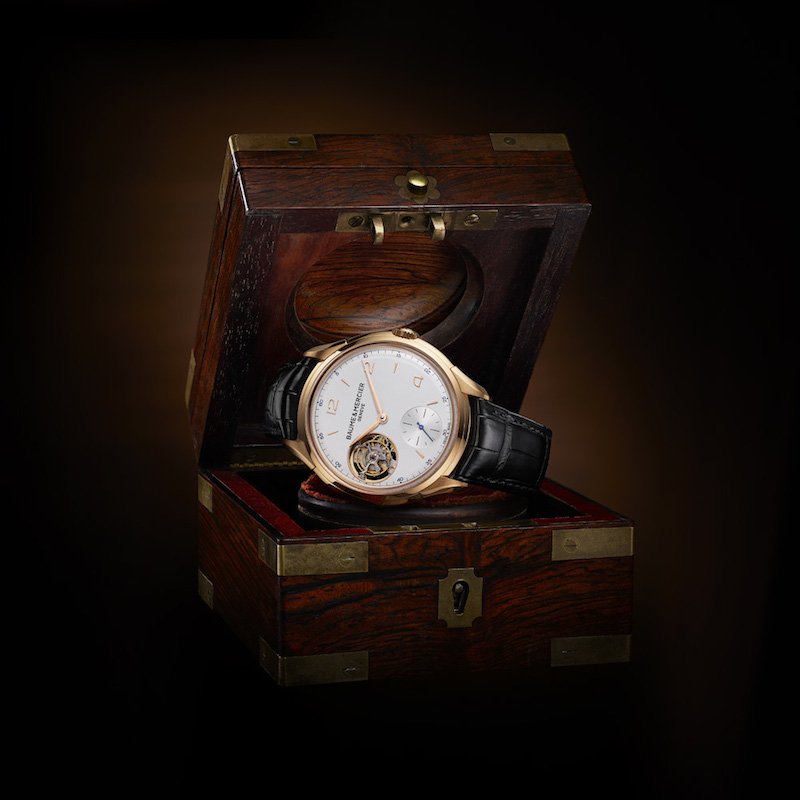 The name of this high precision watch, regulated by a flying tourbillon, refers to the history of the Maison that won 10 grand prix and seven gold medals at various international exhibitions during the nineteenth century, won prizes in chronometry competitions and shone throughout the twentieth century with the quality of its construction and the aesthetics of its creations. But this very exclusive model is also an example of Baume & Mercier’s excellence in the art of etablissage, an ancient watchmaking practice dating back to before the first manufactures. 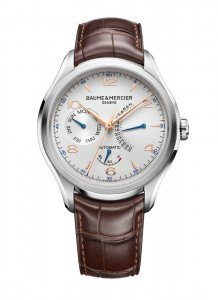 The Clifton Retrograde Date watch has an inspired graphic style, once again illustrating Baume & Mercier’s expertise in the domain of small complications. The timepiece presented this year has a date calendar featuring a display of the power reserve and retrograde date, designed to provide originality and satisfy its owner’s taste for beautiful mechanisms, elegance and a certain idea of balance. Baume & Mercier has always forged the image of a brand closely linked to life’s major events through its frequent involvement with the major celebrations in human existence. The Clifton Retrograde Date is undeniably one of those references that will defy time itself. With each detail of its construction, this watch proves how the spirit that determined its construction is perfectly in phase with the brand whose credo, since its foundation in 1830, is «accept only perfection; only manufacture watches of the highest quality.»

Alexandre Peraldi, Director of the Baume & Mercier in-house Design Studio, readily admits that «there is nothing more complicated than making a simple watch.» This 43 mm steel watch, housing a mechanical self-winding caliber, required a great deal of thought. The presence of many different functions on the dial meant achieving visual equilibrium so as to keep it perfectly legible. Baume & Mercier’s talent indeed lies precisely in finding that ideal balance.

Just one look at the Clifton Retrograde Date and its dial is enough to understand how aesthetic qualities and attention to detail satisfy the wearer’s interest and fascination for fine watchmaking. This timepiece, with its case borrowed from a 1950s Baume & Mercier watch, now an integral part of the museum’s collection, houses a beautifully made mechanical self-winding caliber visible through the transparent sapphire crystal case back. The sun satin-finished dial displays hours, minutes and seconds through the presence of a central seconds hand. But the caliber, fitted with a function plate, also displays the day in a small counter at 9 o’clock, the retrograde date at 3 o’clock and the power reserve at 6 o’clock. The winding level of the barrel spring guarantees that the watch will work for forty or so hours.

“The Art of Balance”

A cornerstone of the new 2014 products, the Clifton Retrograde Date highlights Baume & Mercier’s desire to offer lovers of fine watches a reference timepiece that stands out visually while offering a useful and accessible complication. The Clifton Retrograde Date is guaranteed to be water-resistant to 50 meters and is available in a brown alligator strap, closed by a triple folding buckle with security push-pieces. 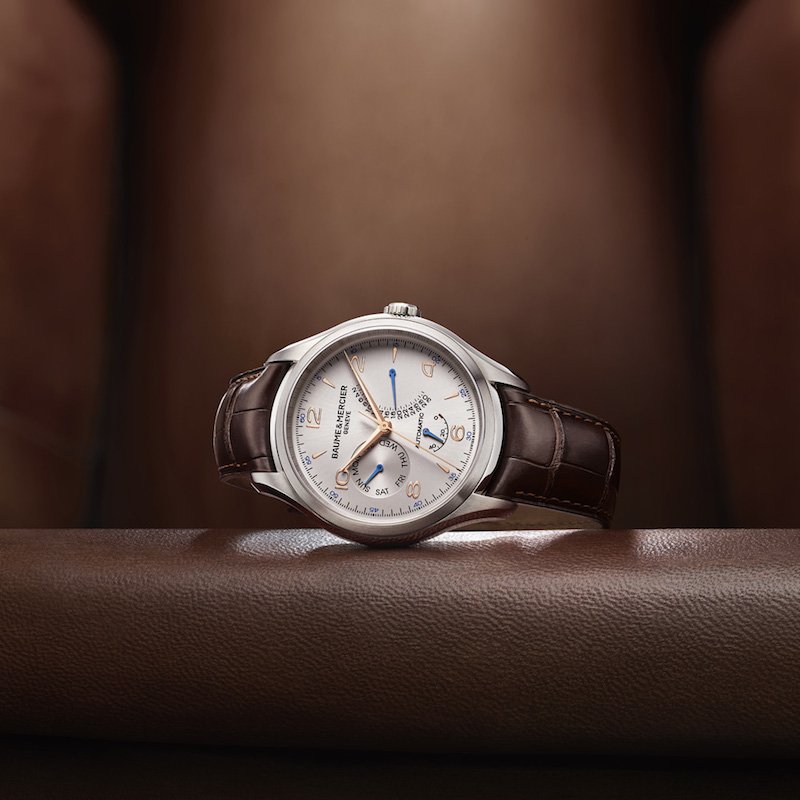 Housed in a 43 mm diameter steel case, the Clifton Retrograde Date features generous dimensions, exceptional finishing and aesthetically appealing display appearing against a silver-colored sun satin-finished background. Inspired by a watch that experienced its heyday in the 1950s, this watch, traditionally driven by a mechanical self-winding caliber combined with an additional retrograde date function, boldly displays information that could be described as retro-futuristic. It thus combines features taken from the past without depriving itself of contemporary options that will capture the attention of watch lovers wanting to live in step with their century. The work accomplished for this watch, to be worn on a brown alligator strap closed by a triple folding buckle with security push-pieces, creates a watch with an inimitable style that many watch lovers, looking for an ideal timepiece, will not fail to notice.