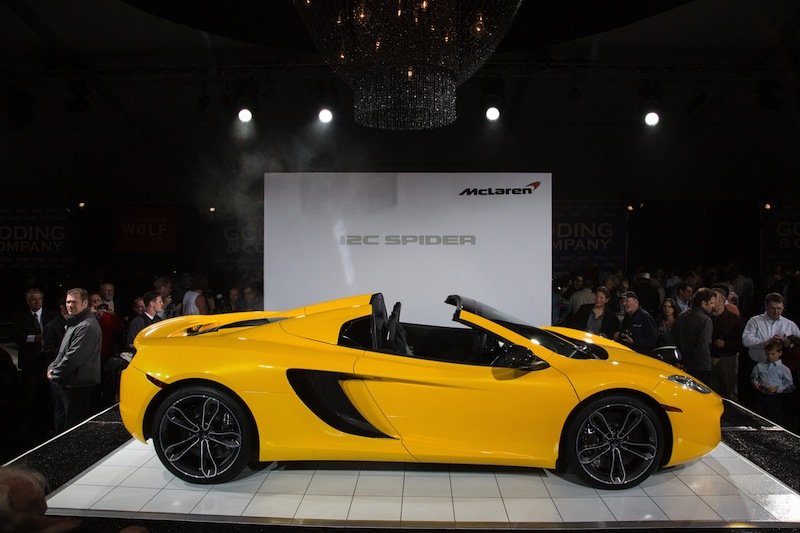 (Manama, Bahrain, 23rd August) – McLaren Automotive, the high-performance sports car company borne of the world’s most successful global motor racing team, enjoyed a high profile and highly successful Pebble Beach Concours d’Elegance near Monterey, California last weekend. Three divisions of the road car business were present at what is claimed to be ‘the world’s premier celebration of the automobile.’

McLaren’s latest road car, the 12C Spider, a concept car from the company’s racing division, McLaren GT, and a unique customer car from the business’ bespoke projects arm, McLaren Special Operations, were revealed. McLaren Automotive has now also announced that it is planning a series of events and presentations in the Middle East that will showcase the skills and operational expertise of McLaren GT and McLaren Special Operations, along with the debut of the 12C Spider in the region ahead of first customer deliveries in the Middle East this December. 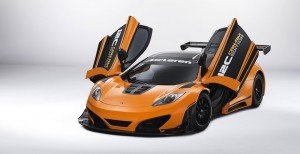 The McLaren 12C Spider, the convertible version of the company’s debut car, the 12C Coupe, made its global public debut at the prestigious Gooding & Company Auction preview during the Pebble Beach Concours d’Elegance weekend.  It was revealed in a stunning new Volcano Yellow ‘Elite’ colour, available as an option on the Spider and Coupe in 2013.  McLaren Special Operations, the McLaren business responsible for the delivery of bespoke modifications and personalisation to McLaren road car owners, presented the McLaren X-1 – their first completely unique car designed and built in consultation with its owner. Finally, McLaren GT, the racing division of McLaren Automotive, displayed a track-only concept car, the 12C Can-Am Edition, which presented how McLaren GT could deliver the most powerful and lightest McLaren 12C derivative to-date.

Mark Harrison, Regional Director for McLaren in the Middle East and Africa, said: “Last weekend’s debuts at Pebble Beach not only showed just what McLaren is capable of designing and delivering in the luxury sports car market, but also that, as a business, we appreciate that we have to challenge on all fronts against our competitors: whether that is on the track, in the showrooms, or in attending to clients’ desires for personalisation. For a new and relatively small car company, the challenges to deliver to the expectations of the McLaren brand and its successful racing and road car history are immense, but we will not rest until our road car business delivers the same results as our racing team has over the years.”

He continued: “I intend to showcase all of these exciting new developments across the region in 2012 as an example of our desire and ability to satisfy every customer’s conceivable request. The 12C Spider will tour our dealerships in the autumn, as will a unique car from McLaren Special Operations – not the incredible McLaren X-1 unfortunately as that goes into our very proud client’s private car collection. Meanwhile, plans are being laid to debut a 12C GT3 car in the region before the end of the year. These are exciting times for McLaren Automotive, and not bad going for our first full year of operation in the Middle East!” 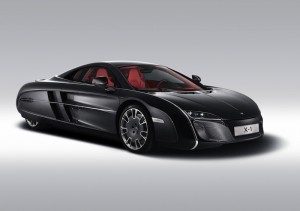 The 12C Spider was revealed in a dramatic unveiling by McLaren CEO, Mr Antony Sheriff and was displayed on the Concept Car Lawn throughout the weekend of the Pebble Beach Concours d’Elegance. The second model in McLaren’s growing range of high-performance sports cars, the Spider features a Retractable Hard Top (RHT) folding roof system that can be lowered or raised on the move – a system unique to McLaren and not available among other sports cars within its segment, with the lightweight M838T power plant visible through a glass screen positioned behind the tonneau cover.  The 12C Spider’s impressive power output means it closely matches the Coupe’s performance figures, another achievement for McLaren who continue to deliver on sublime comfort on the road, yet still provide race car performance and handling.

McLaren Special Operations (MSO), the division of McLaren Automotive responsible for the delivery of bespoke projects, presented a breathtaking one-off supercar at The Quail, an exclusive event on August 17 2012 that is a highlight of the Pebble Beach weekend in Monterey, USA.

The McLaren X-1, based structurally on the company’s ground-breaking carbon MonoCell but with a totally unique body has been created for an anonymous car enthusiast.

MSO Programme Director, Paul MacKenzie commented: ‘The conversation began with our Executive Chairman Ron Dennis almost three years ago – before the 12C was even launched. The client wanted a machine that had all the capability of the 12C but wrapped in a unique body that reflected his needs and personality.’

A mood book, full of inspiring images from which the design spirit of this unique car was derived featured various examples of architecture – including the Guggenheim museums in New York and Bilbao – plus a Jaeger LeCoultre art deco clock, an Airstream trailer, a Thomas Mann Montblanc pen, a grand piano – and an eggplant. ‘The client liked the shiny texture of the finish,’ notes McLaren’s Design Director, Frank Stephenson. There was also a black-and-white photo of Audrey Hepburn.

Finally, McLaren GT, the racing car arm of McLaren Automotive, displayed a track only concept race car, the 12C Can-Am Edition.  Finished in a striking shade of McLaren Orange, it is a tribute to the race cars of founder Bruce McLaren and team mate  Denny Hulme, who saw strong success during the 1960’s and 70’s in both Formula 1 and Can- Am racing.  The 12C Can-Am Edition concept car is designed to be “the ultimate track car” without constraint and not subject to the regular racing regulation, despite being based on the 12C GT3 race car, which many will be familiar with following its recent successes on European circuits. Designed using Formula 1 technology and simulation to optimise downforce, this unique concept car offers a massive 30 per cent increase in downforce and is the most powerful and lightest McLaren 12C to-date producing 630 hp and weighing only 1200 Kg.