Sharing similar design/styling cues from the 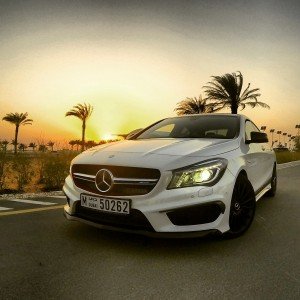 Mercedes CLS, this car looks stunning, particularly from the front and profile. Aggressive as well, with a front splitter, big black rims, quad exhausts, a carbon fibre boot spoiler at the back, black decals and red accents all over, it definitely turned heads on the road. Its only problem in the looks department is with its slightly odd proportions at the back. But it’s a stunning little beast overall.

For a relatively small car, the cabin is 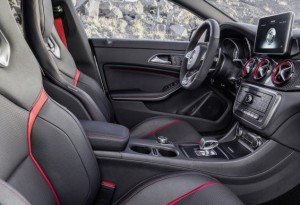 pretty spacious; a genuine pleasant seat in which to sit. Yes there are a few bits of hard plastic here and there, but you can forgive that because every time you get in the car, you get that overall sense of being in an upmarket vehicle. And then there are the seats. Designed by “Recaro”, they hug and grip you tight enough so you don’t slither about in the corners, and although they are a bit hard, I absolutely loved them. The same, however, can’t be said about the back seats, as the swooping roofline compromises on headroom.

Mercedes has managed to build the most powerful four-cylinder production engine in the world, and in this car, it makes acceleration and overall speed, for that matter, seriously quick. The overblown 2.0 litre Turbo charged four-pot makes a whopping 360 Bhp and 450 Nm of torque; that’s good enough to launch the CLA 45 from a standstill to 100 Km/h in 4.6 Seconds. Power is delivered to all four wheels through a seven-speed dual-clutch transmission, which for the most part is okay. Upshifts are fast enough and accompanied by a rasping crackle from the sports tuned exhaust, which really adds to the cars character and fun factor. But it’s the downshifts that are disappointing. At high revs, it doesn’t always give you the gears you want, and for a performance car, it really is a shame. 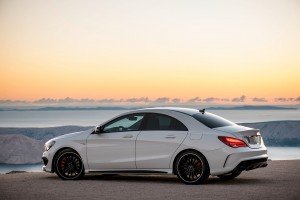 The ride quality is as you’d expect from any sports car; firm, but not harsh. I think Mercedes got the balance between performance/comfort spot on with this suspension setup. Being an all-wheel drive, this little AMG has some serious grip to it. Throw it in at the corner at ridiculous speeds and you’ll make it out in one piece with no drama whatsoever. The steering wheel is pretty good as well, with almost a perfect weight to it and enough feedback from the front tyres. And, if things do get out of hand, the breaks do a really, really good job at stopping.

I thoroughly enjoyed the few days I 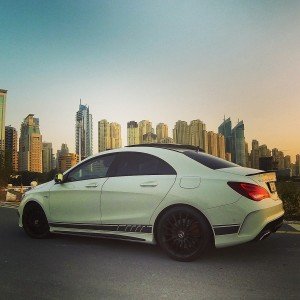 spent with the CLA 45 AMG; there are so many things I like about it and very few things that I don’t. I love its aggressive looks, the loud obnoxious noise it makes, the colossal grip and the ridiculous power from that little engine. In addition to Turbo Lag and a slightly un-engaging driving experience, my biggest disappointment has to be the gearbox. It’s not what I’d expect from a dual-clutch transmission, especially when compared to Porsche’s PDk or VW’s DSG. It almost ruined the entire experience.

All things aside, as a ferociously fast and practical everyday sports sedan, the CLA 45 AMG is one hell of a car to own.