Since its launch in 2009, the Ghost has been a vision of simplicity – taking the core values of Rolls-Royce and creating contemporary effortless luxury. Achieving a new dynamism while remaining true to its heritage, Ghost projects a more informal presence than the Phantom with an even greater emphasis on driving, and as such the 2014 model year reflects this vision of riding and driving in peerless fashion with subtle enhancements that ensure the car is equipped to pinnacle Rolls-Royce standards.

While seated comfortably in the Ghost’s slightly elevated position behind the wheel, described as the authority position, drivers will now have a new IPS 10.25″ HD screen before them, the largest in its class, featuring higher resolution with a better viewing angle and colour contrast. This screen can be used to display the impressive 3D City View, which is one among many subtle navigation enhancements in the vehicle including new map representation, improved road calculation and High Guiding, where the correct lane and the correct turn is recommended to the driver via the split screen as a clear small map. 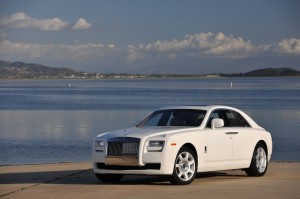 The Spirit of Ecstasy Rotary Controller in the 2014 model year Ghost presents a pad with the ability to scroll through function menus by turning the chrome dial and pressing down to select its functions.

A pointer function allows menu options to be selected more quickly. The inclusion of inputs by written text, for example where a name and number must be added via the telephone menu is an additional improvement. It recognises characters in English, Latin, Mandarin and Arabic, to assist drivers in the company’s second and third largest global markets, mainland China and the Middle East respectively, where character selection can otherwise be a time-consuming process.

Created and fine-tuned by the leading experts in industry, the bespoke sound system in the 2014 model year Ghost allows for a rich and all-encompassing aural experience, bringing the centre of sound even closer to the passenger’s ear. An array of 16 loudspeakers, two tweeters and a full active 18-channel amplifier with 1300W maximum power deliver unparalleled sound quality, while the Theatre setting creates a perfect surround-sound “bigger than live” experience. 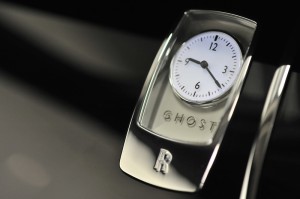 The latest in audio-engineering technology ensures that no external conditions can affect the sound quality inside the vehicle. Automatic-controlled microphone volume and tone adjustment change the music according to the noises around the car, for example the sound will change in windy conditions and also over uneven roads to maintain optimal sound. In addition, DIRAC technology process eliminates loud spots and dead spots caused by sound reflecting off windows while Active Crossovers eliminate sound distortion.

Adding to the already vast array of existing comfort features, Ghost 2014 builds upon the Comfort Access, a first of its kind convenience feature first introduced in the Ghost 2013 model that allows the opening of the boot with an effortless foot movement in case both hands are busy. The new model now includes a Smart Close function alongside Smart Opener, where the boot can then be closed with a foot movement beneath the rear bumper of the car.

The aesthetic appeal of the Ghost is further enhanced with the option of Salamanca Blue and Silver Sand colours fortifying the existing palette of 44,000 exterior paint options, while three new wood variants have been introduced: Tudor Oak, Cross-banded Waterfall Bubinga and Lemon Satinwood, and Cross-banded Paldao and Dark Heart Ebony.

Ghost is a modern execution of timeless Rolls-Royce elegance, widening its appeal beyond the purely traditional but retaining the core values that make the Rolls-Royce marque unique and cherished.